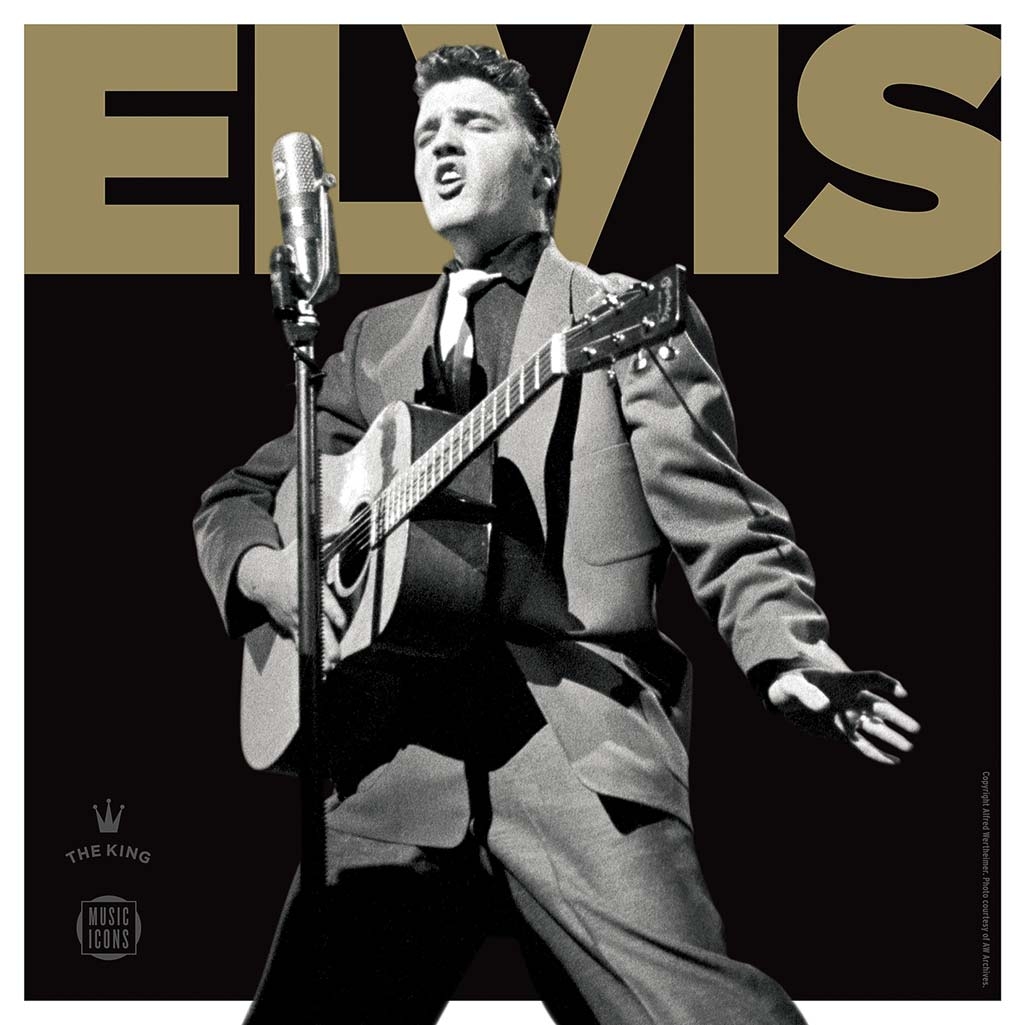 The reverse side of the pane of 20 Elvis Presley forever stamps features the singer in performance with his guitar. The stamp panes in the Music Icons series are designed to look like a 45-rpm record in a paper picture sleeve. 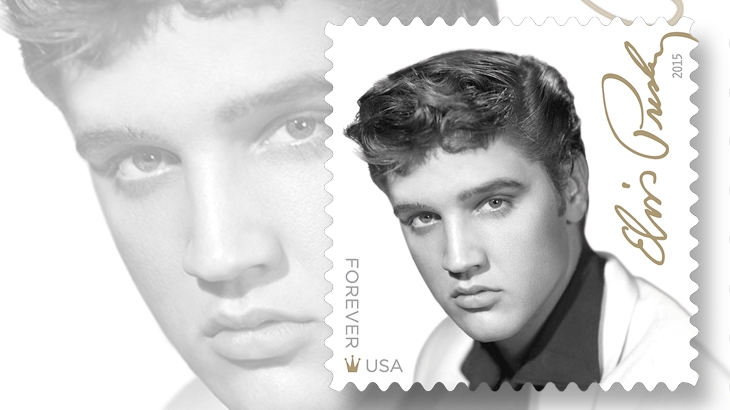 The Elvis Presley forever stamp in the Music Icons series will be issued in a pane of 16 with a first-day ceremony at Graceland in Memphis, Tenn. 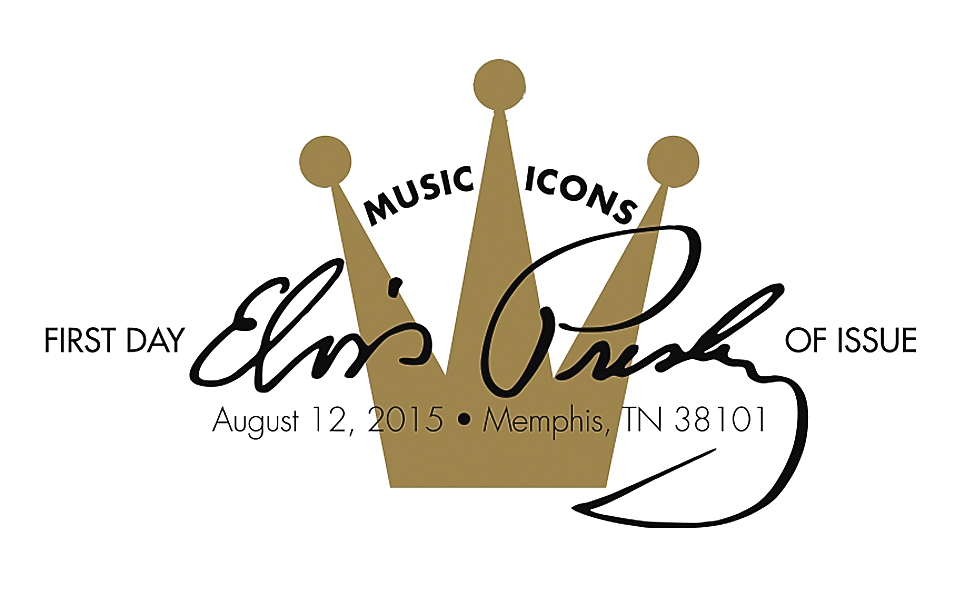 The Elvis Presley digital color first-day cancel also has a crown and signature, but the crown is larger and printed in gold. 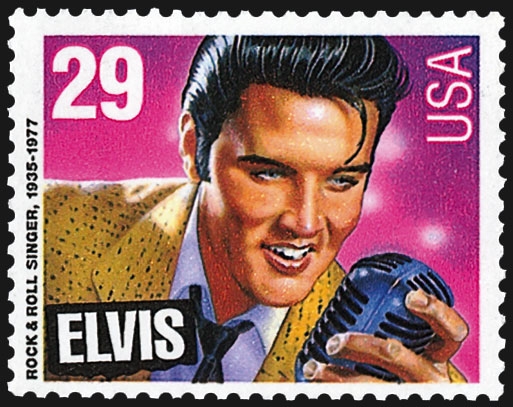 The 1993 29¢ Elvis Presley commemorative is considered one of the biggest selling stamps in U.S. Postal Service history. The USPS has printed 100 million of the new Elvis forever stamps. 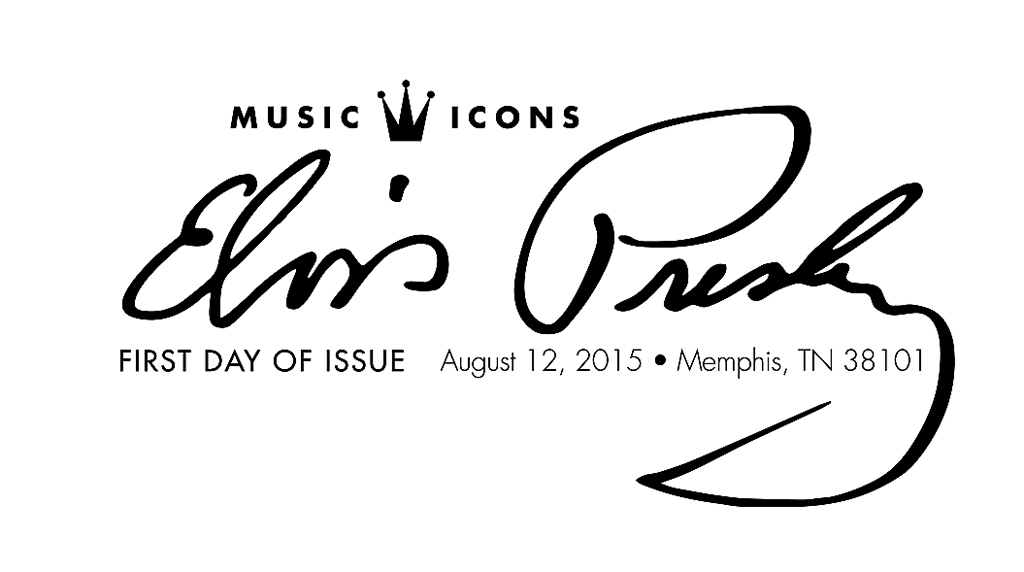 The black first-day cancel for the Elvis stamp has a pictorial design that includes a small crown and a replica of Presley’s signature.
Previous
Next

Elvis Presley is making an encore appearance on a new United States forever stamp that will be issued Aug. 12.

It’s the second U.S. postal tribute to the performer who was long ago dubbed “the King of Rock ‘n’ Roll.”

The first, in 1993, caught the attention of almost everyone with a highly publicized public vote to select the design of a stamp that would honor the worldwide music legend.

The choice between “young Elvis” and “old Elvis” was no contest, and Mark Stutzman’s portrait of the rising young star was used to print the 29¢ commemorative (Scott 2721).

Sensing the groundswell of public interest, the Postal Service in 1993 sent the Bureau of Engraving and Printing an order for an additional printing before the stamp was ever issued, creating a total of 517 million stamps of this initial version alone; two major Elvis Presley stamp varieties would follow in June of the same year.

The Postal Service has ordered just 100 million stamps for this new issue, though that’s considerably more than the standard U.S. commemorative stamp order these days.

Like all the stamps in this series, the Elvis Presley stamps will be issued in panes of 16 that resemble the paper picture sleeve of a 45-rpm record.

The new stamp features a black and white photo of Presley taken in 1954 or 1955 by William Speer when the young singer was just 19 or 20 years old.

“Forever” reads down the left edge of the design to the lower left corner, meeting a gold crown that rests there. Presley’s signature is reproduced in gold reading up the right margin.

Surrounding the stamps on the front of the pane is a listing of Pres­ley’s 18 No. 1 singles, including Heartbreak Hotel, All Shook Up and Jailhouse Rock.

Below the stamps is a brief biography that reads, “Elvis Presley (1935-1977) was one of the first true stars of rock and roll. The singer, guitarist, musician, and actor combined country, gospel, and rhythm and blues to create a unique sound that lives on today. Through his music, The King of Rock and Roll helped break down social barriers in the 1950s, and in the process changed American pop culture forever.”

Still in his teens when he began recording, Presley, with guitarist Scotty Moore and bassist Bill Black, produced a sound that coupled rhythm and blues with a lively and distinctive beat and Presley’s charismatic style.

After a year with Sun Records, Presley signed with RCA in 1955 and produced an unmatched string of 104 Top 40 hits.

He made a series of popular films, beginning with Love Me Tender in 1957. Drafted the following year, Presley served in the U.S. Army for two years in Germany.

He married Priscilla Beaulieu in 1967, and they had one daughter together, Lisa Marie, before divorcing in 1973.

Presley died from a heart attack at age 42 in 1977. Over the course of six decades his legend has endured and grown as one of the unmatched pioneers of rock ‘n’ roll.

The first-day ceremony for the new stamp will take place on the front lawn of Presley’s Graceland Mansion, a Memphis tourist stop and a shrine for Presley’s many ardent fans.

Priscilla Presley will join Postmaster General Megan J. Brennan for the Wednesday morning event, which is open to the public.

Two pictorial first-day cancels have been prepared for the Elvis Presley stamp, in black and in color, both featuring Presley’s signature and an ornamental crown.

Technical details and ordering information for the black first-day cancel are given below.

Standard ordering instructions apply. Collectors requesting first-day cancels are encouraged to purchase their own stamps and affix them to envelopes. The first-day cover envelopes should be addressed for return (a removable label may be used), and mailed in a larger envelope addressed to Elvis Presley Stamp, Postmaster, 555 S. Third St., Memphis, TN 38101-9998. Requests for first-day cancels must be postmarked by Oct. 11.

The Postal Service’s uncacheted first-day cover for the Elvis Presley stamp is item No. 589016 at 93¢.