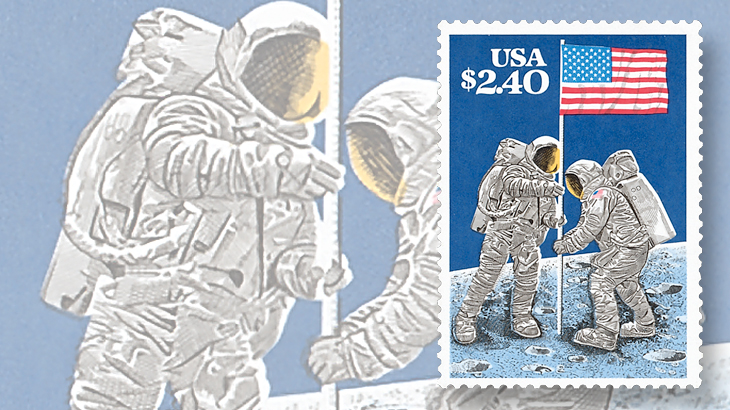 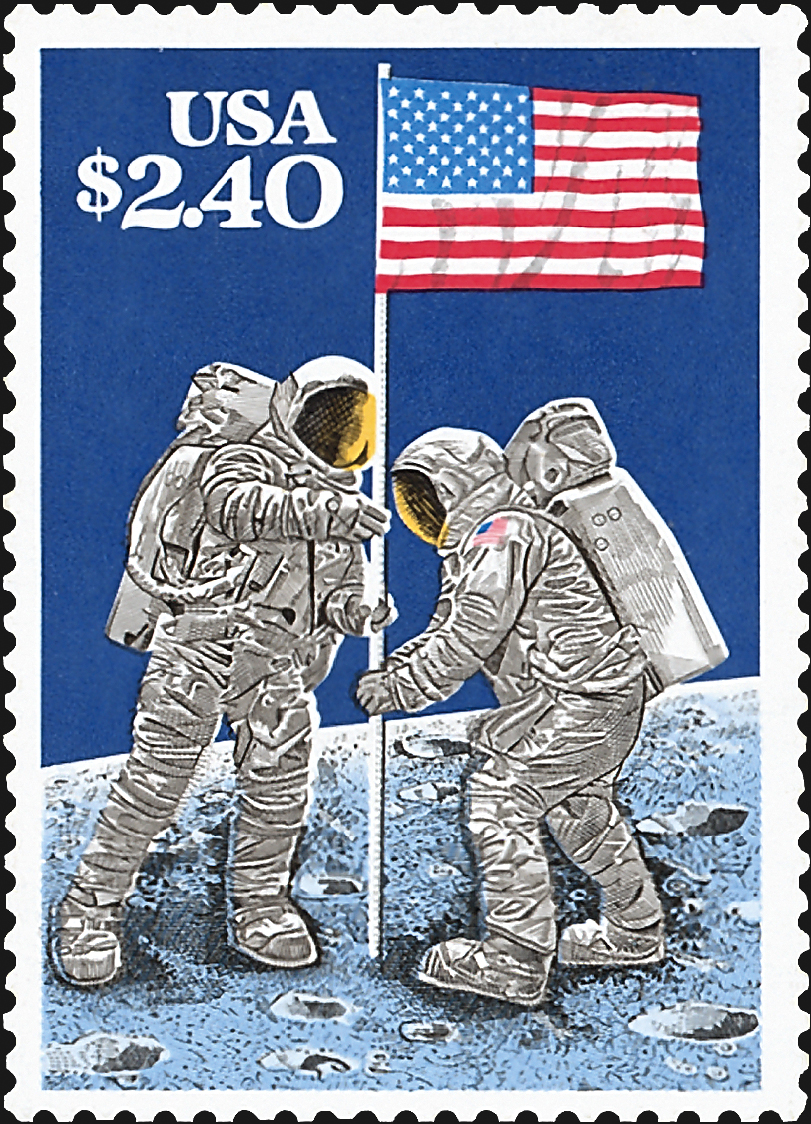 A single $2.40 Moon Landing stamp was used on this Priority Mail letter sent Nov. 26, 1990, from New York, N.Y., to Pleasantville, N.Y. A backstamp (not shown) reveals that the cover arrived at its destination the next day, Nov. 27.
Previous
Next

On July 20, 1989, the United States Postal Service issued a stamp to celebrate the 20th anniversary of man’s first landing on the moon.

Fittingly, the first-day ceremony took place at the National Air and Space Museum in Washington, D.C.

In addition to honoring one of the greatest achievements of the 20th century, the stamp (Scott 2419) also promoted Priority Mail service.

At the time of issue, the $2.40 face value satisfied the Priority Mail rate for items that weighed from 12 ounces to 2 pounds. However, the stamp was valid for postage on any type of mailing.

Priority Mail service promised two-day delivery between major markets and three-day delivery to all other locations.

In the 1989 Linn’s U.S. Stamp Yearbook, George Amick explained some of the motivation behind issuing the stamp:

“Space had been a popular topic for U.S. stamps in the past, but with the troubles that beset the U.S. space program in the 1980s, particularly, the tragic loss of the space shuttle Challenger in January 1986, there was little to commemorate postally. The $2.40 Priority Mail stamp was the first true space-theme stamp to come from USPS since the eight-stamp Space Achievement block in 1981.”

Although the stamp bears no anniversary inscriptions, there can be little doubt that the two astronauts shown are Apollo 11 crewmembers Neil A. Armstrong and Edwin E. “Buzz” Aldrin Jr.

The lithographed and engraved Moon Landing stamp was issued in panes of 20.

Collectors should be wary of examples that have a gray background instead of the normal dark blue.

A footnote to the listing for Scott 2419 in the Scott Specialized Catalogue of United States Stamps and Covers explains that some examples “may have been caused by a chemical wiping of the blue plate. However, the same or extremely similar stamps can be produced by exposing normal stamps to sunlight or fluorescent light for varying time periods.”

Postal history of the Moon Landing stamp is not hard to find. I’ve acquired a number of interesting uses on registered and other types of mail.

Shown here is a nice solo use of the $2.40 Moon Landing stamp on a letter sent via Priority Mail Nov. 26, 1990, from New York City to Pleasantville, N.Y. The letter arrived at its destination one day after mailing.