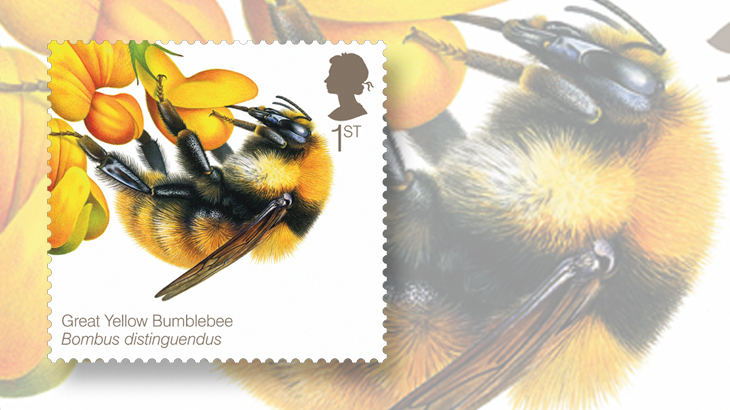 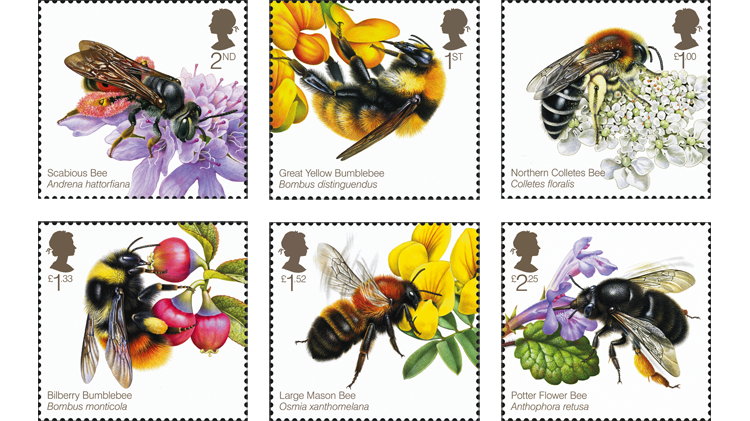 Four of the stamps are se-tenant (side-by-side) in a souvenir sheet, and the other six were printed separately in sheets of 50 (sold as panes of 25 in most postal outlets).

In announcing the stamps, Royal Mail said: “Bees are our unacknowledged partners and ancient allies, vital in the pollination of food crops, keeping farms in business and in helping parks, gardens and the countryside to thrive. Yet bees are in decline in their numbers and their range.

“The plight of bees is in the press every week and this stamp issue is to educate as to the huge variety of British bees, their vital importance and to promote a protective feeling among customers and mail senders and receivers.”

Two of the stamps produced in sheets of 50 are nondenominated, one for use on domestic second-class mail (54 pence) and the other for first-class mail (63p).

The second-class stamp depicts the scabious bee (Andrena hattorfiana), named for the scabious flowers which it is dependent on. The bee on the stamp is shown on field scabious (Knautia arvensis).

The scabious bee is a solitary bee, meaning that it does not live in colonies, and a mining bee because it lives on the ground.

According to the new-issue announcement from Royal Mail, the key area for this bee in the United Kingdom is southwest England. Other populations exist in East Anglia and South Wales.

This species has dramatically declined in the United Kingdom, now at 80 percent of its historic range, and is found in northern Scotland, the Western Isles and Orkney, where it feeds on clover, vetch and knapweed.

Illustrated on the £1 stamp is a northern colletes bee (Colletes floralis) on the flower of a wild carrot (Daucus carota).

Some of the largest populations of this rare species are found in the United Kingdom and Ireland. In 2003, this solitary, mining bee was rediscovered in Northern Ireland after last being recorded there 70 years earlier.

The bilberry or mountain bumblebee (Bombus monticola) is named after one if its favorite plants, the bilberry, and its habitat in higher altitudes.

On the £1.33 stamp, it is shown extracting nectar from bilberry (Vaccinium myrtillus). It also enjoys bramble, raspberry, bell heather, sallow and legumes.

While concentrated in northeastern England, the bilberry bee also is found in Wales and southwestern England.

The £1.52 denomination depicts Britain’s rarest solitary bee, the large mason bee (Osmia xanthomelana), on horseshoe vetch (Hippocrepis comosa). In the United Kingdom, this bee is found only at two sites in Wales.

Pictured on the £2.25 stamp is a potter flower bee (Anthophora retusa) on ground ivy (Glechoma hederacea).

This bee prefers the sandy soil found in dunes, cliffs and commons, and is known only in a few sites in southeastern England. The Isle of Wight recently launched a campaign to save this rare species.

The four stamps in the Bees souvenir sheet were designed by the London agency Interabang and feature illustrations by Andy English showing different behaviors of the western or European honeybee (Apis mellifera).

Inscriptions below the stamps explain these behaviors. The inscription for the waggle dance reads, “The waggle dance communicates the direction and distance to flowers yielding nectar and pollen.”

Two £1.33 stamps in the sheet portray the making of honey and tending of the young, respectively.

The selvage of the sheet features a decorative border of different flowers.

International Security Printers printed the aforementioned stamps and the souvenir sheet by offset. The stamps measure 37 millimeters by 35mm, perforated gauge 14 by 14.5. The souvenir sheet is 179mm by 74mm.

Other Royal Mail products offered in conjunction with the Bees issue include first-day covers; 11 postcards reproducing the designs of the 10 stamps and the souvenir sheet; and a presentation pack with text by science writer, biology professor and founder of the Bumble Conservation Trust Dave Goulson.