The nondenominated printed stamp and maple-leaf-shaped geometric detailing on one of the few withdrawn international-rate ($2.50) Canada Post postal cards that have surfaced to date bearing the withdrawn hoodoo image. 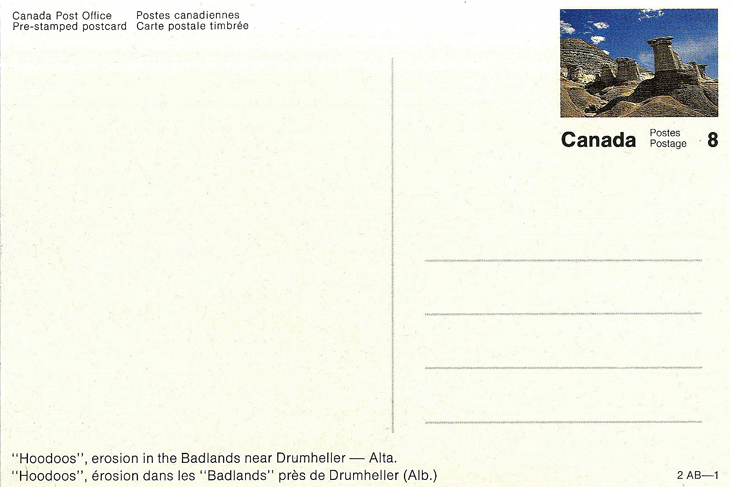 The stamp side of a 1972 8¢ Canada postal view card accurately described as picturing “ ‘Hoodoos’, erosion in the Badlands near Drumheller, Alberta.” 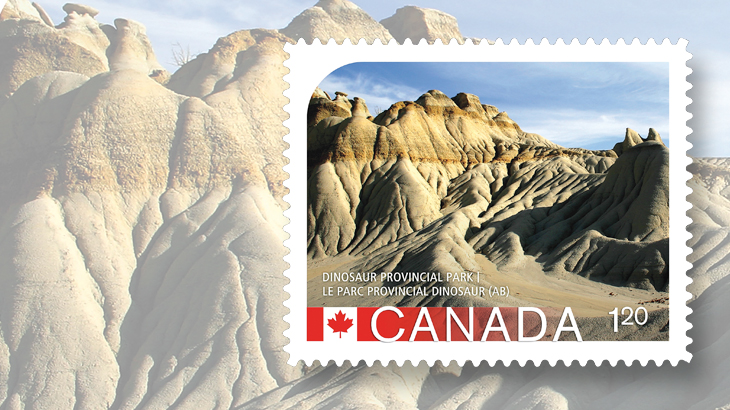 A striking and accurate image of the Alberta Badlands, which dominate Dinosaur Provincial Park, is shown on this new $1.20 stamp issued Aug. 21 by Canada Post. The stamp replaces the UNESCO World Heritage Sites Dinosaur Provincial Park stamp with a misidentified image that had been issued July 3 and then recalled for destruction.
Previous
Next

The original stamp was issued July 3 in Canada Post’s UNESCO World Heritage Sites series and withdrawn shortly thereafter, along with other products with the design mistake.

The new stamp was produced in just 49 days. Created with the assistance of park officials, the design features a striking landscape of ancient, arid hills and eroded terrain cut by long-dry creek beds typical of the Alberta Badlands, which dominate the remote park.

This honored Canada Post’s commitment to accurately depict the park, answering complaints about the earlier stamp by some Alberta critics.

The withdrawn stamp pictured a frequently photographed and readily recognizable image of hoodoos, eroded columns widely known to be located near Drumheller, Alberta, many miles northwest of the park.

Souvenir sheets and booklets of these $1.20 stamps showing the hoodoos, as well as Canada Post first-day covers and nondenominated international-rate ($2.50) picture postal cards were abruptly withdrawn from sale and slated for destruction.

However, some recalled stamps and a small number of FDCs had already gotten into circulation, and were sold through auctions on the Internet.

As of Aug. 27, at least 560 such lots had sold on eBay, varying from single stamps to three or more shrink-wrapped packages of 50 booklets containing 100 of the withdrawn self-adhesives.

It was thought that the hoodoo hullabaloo was at last subsiding when, on Aug. 16, the postal cards picturing the hoodoos were offered by a single buyer on eBay.

Shown nearby is the printed stamp on the address side of one of these Hoodoo cards, featuring a nondenominated version of the now-familiar withdrawn design with maple-leaf-shaped geometric detailing added to its left.

The cards can be mailed from Canada to any destination in the world, with the picture side showing the hoodoo image with a “CANADA / POSTAGE PAID / PORT PAYE” imprint at top right and UNESCO and World Heritage in Canada logos at top left.

The first card was briefly offered on eBay at a price of $199.99, which was quickly increased to $650, followed by a second card offered at U.S. $999.99. However, the sales were called off later that same day by the Canadian seller.

This seller told Linn’s that he suspected that very few Hoodoo cards were likely to have survived. He felt that a few may have been set aside for and picked up by avid philatelists before news of the recall was widespread, as almost happened to the only other eBay seller offering cards from this World Heritage Sites set.

Linn’s contacted that seller of cards from the set to ask what price he wanted for his Hoodoo card. The seller replied that he had no Hoodoo card, and was selling only the other four cards that were never withdrawn.

By the time he had picked up his standing order for all World Heritage Sites items the day after the recall was announced by e-mail, the postal clerk had dutifully removed every Hoodoo-related item, including the valuable single withdrawn card.

“I was not a happy camper,” he added. “To add salt to the wound, the gal that runs the postal substation hadn’t checked her e-mails the previous day, so if I had gone in … I could have gotten everything even though the [Hoodoo items] had been recalled.”

Of course, some postal cards may have been retained and sold even after the recall, though the small market for picture postal cards compared to that for stamps still makes it likely that the number would not be large.

This story would not have been possible without the generous assistance of Jason Zhe C., who has generously shared his insight and commentary as an ardent Canadian collector with me ever since this story first broke. He also gave us the crowning anecdote to wrap up the tale, and its final pun: a case of hoodoo deja vu.

From his collection of Canada postal stationery, he unearthed one of the earliest of what were known as postal view cards in 1972. Shown nearby is the stamp side from that 8¢ card — a view of precisely the same hoodoos pictured incorrectly 43 years later.

In fact, the photographers who shot each scene could only have stood a few yards apart when they triggered their shutters almost a half-century apart.

What’s especially galling, however, is that Canada Post in 1972 got its geographic facts right.

The description on the address side of the 8¢ card reads, ” ‘Hoodoos’, erosion in the Badlands near Drumheller, Alberta.”

Jason’s card is listed in the 2001 seventh edition of Webb’s Postal Stationery Catalogue of Canada and Newfoundland as VC22, and is priced at $1.

So what are the recalled Hoodoo stamps worth?

Figuring that the earliest prices would show a wider range than those established more recently, I looked at the last 50 recorded sales on eBay of both the self-adhesive six-stamp booklets containing two of the Hoodoo stamps and the gummed, perforated five-stamp souvenir sheets containing a single Hoodoo stamp. The original face values of these were $7.20 Canadian and $8.60 Canadian, respectively.