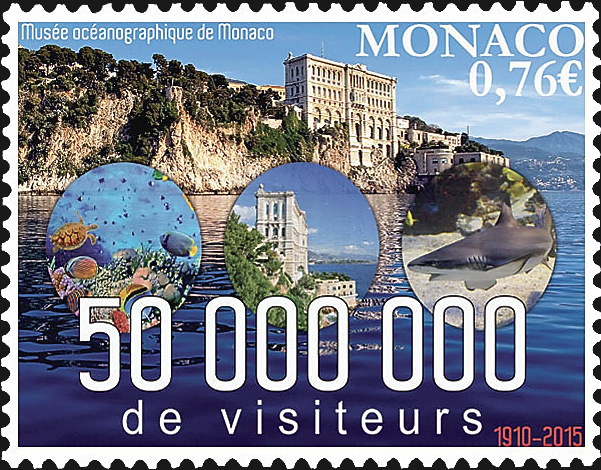 A new stamp from Monaco commemorates the 50 millionth visitor to the Oceanographic Museum, founded by Prince Albert I in 1910.

Liechtenstein photographer Marco Nescher won a contest to design the first stamps in a new series highlighting nature reserves. One se-tenant pair of stamps shows a pond at Schwabbrunnen-Ascher.

The other se-tenant pair in Liechtenstein’s Nature Reserves series features a photograph of a meadow. The stamps were issued June 9. 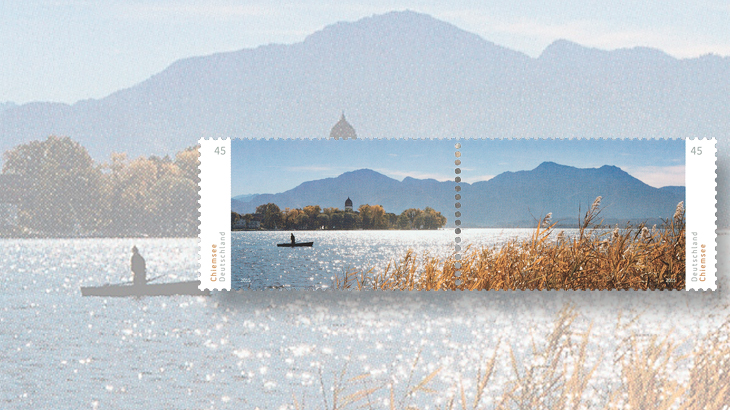 The latest se-tenant pair of stamps in Germany’s Most Beautiful Panoramas series shows a peaceful scene of Chiemsee, also called the Bavarian Sea.
Previous
Next

Panoramic views of nature are shown across three recent pairs of stamps.

Two of these se-tenant (side-by-side) pairs were issued by Liechtenstein June 9, the first in a Nature Reserves series.

One photograph features reflections of trees in a pond. The other shows a meadow in the foreground with mountains in the background.

These photographs were selected from several entered into a competition on the theme of the nature reserves.

Philately Liechtenstein, the principality’s philatelic office, reports that future stamps in the series will show other photographs from this contest.

Cartor Security Printing in Meauce, France, printed the stamps by offset in panes of eight (four of each pair).

An additional photograph of Schwabbrunnen-Ascher is pictured in the selvage.

The area was set aside as a nature preserve in 1962. According to the new-issue announcement, this “low-moor bog” serves as a unique habitat for “rare animal populations and plant communities.”

Germany’s Most Beautiful Panoramas series began Feb. 13, 2013, with a pair of stamps featuring the Gendarmenmarkt in Berlin (Scott 2712-2713).

The new pair of 0.45 stamps is the first in the series to feature a nature scene. It shows Heinz Wohner’s photograph of a solitary boat on Chiemsee, a freshwater lake also called the Bavarian Sea.

The name sea has a “kernel of truth,” according to information on the website of the Bavarian Department of State-owned Palaces, Gardens and Lakes.

The description  reads in part: “Not only does the lake, which has an area of 80 square kilometres, have tides like the sea, it also originated from the primeval Thetis Sea which once covered almost half of Europe.

“Among its attractions are the island of Herrenchiemsee with its palaces, the monastery on Frauenchiemsee and Julius Exter’s House in Feldwies.”

The onion dome of the monastery can be seen on the stamp on the left of the pair, with the Bavarian Alps in the distance.

Stefan Klein and Olaf Neumann designed the stamps. Giesecke & Devrient printed them by offset in sheets of 10 and as self-adhesives in booklets of 10.

Views of the Oceanographic Museum of Monaco and ocean life are featured on a 0.76 commemorative issued July 1 to celebrate the  50 millionth visitor to the museum.

Inscribed in French in large letters at the bottom of the design is “50 000 000 visiteurs.”

The year date of the museum’s opening, 1910, can be seen in the lower right of the design.

Creaphil designed the stamp. France’s Philaposte printed it by gravure in panes of six.