Nepal is in the headlines, and in our stamp albums 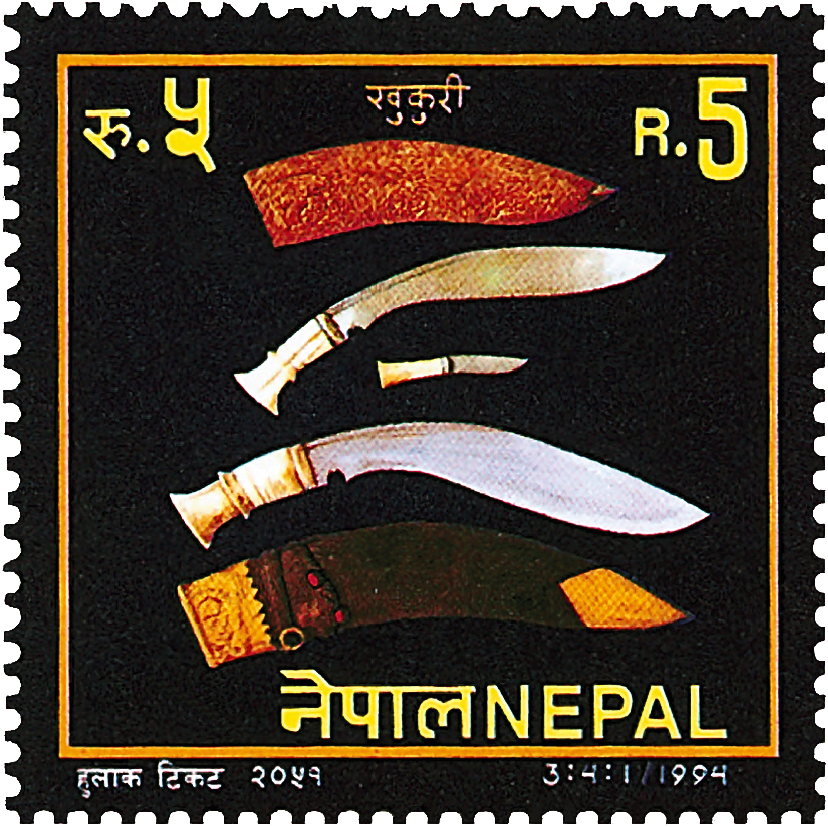 A khukri is included on a 1994 stamp depicting traditional weapons. The khukri is pictured second from the bottom on this 5-rupee stamp. 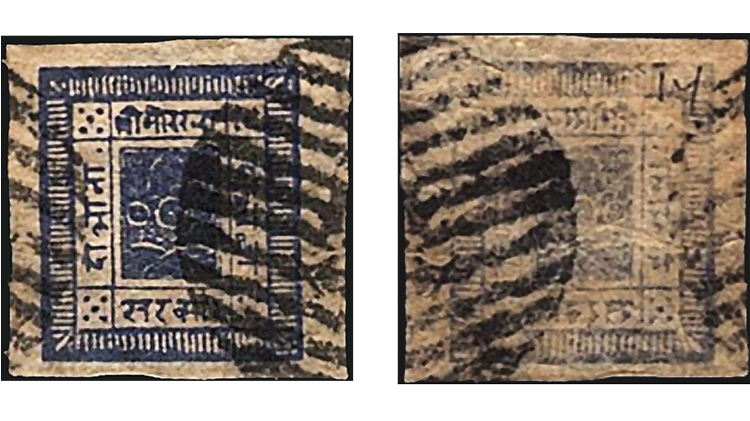 An 1886 1-anna stamp using the same design as the 1881 1a issue of Nepal was printed on native wove paper. The postmark on the front is plainly visible on the back, because of the nearly transparent paper. 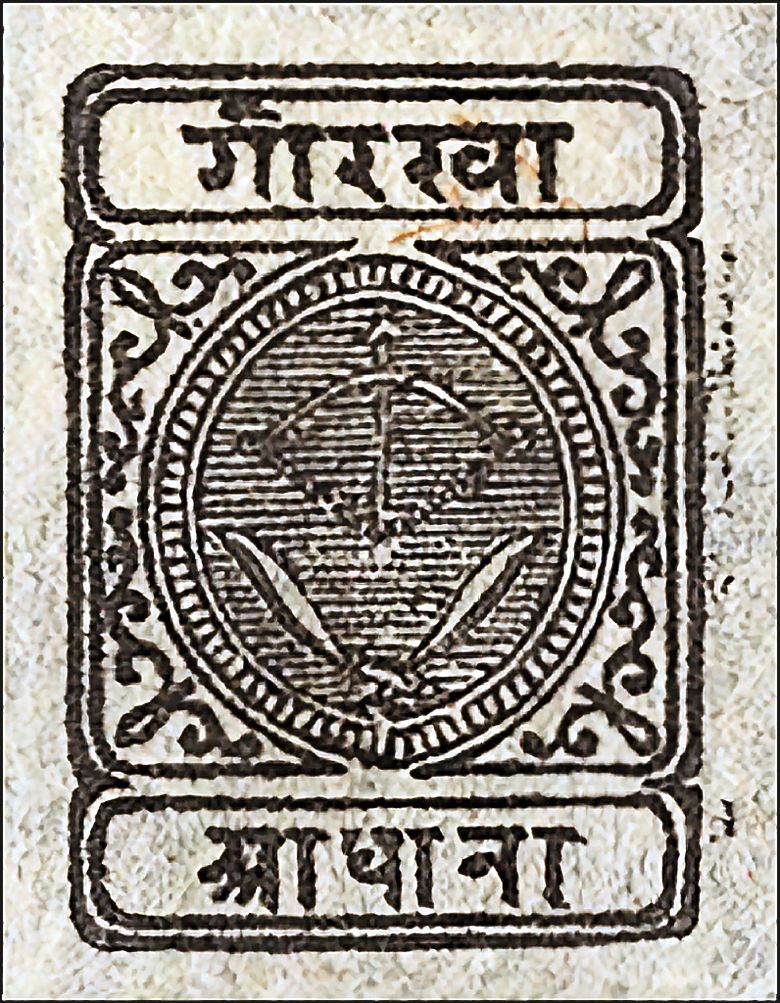 The god Siva’s bow and two khukris form the design on Nepal’s second stamp issue, from 1899. 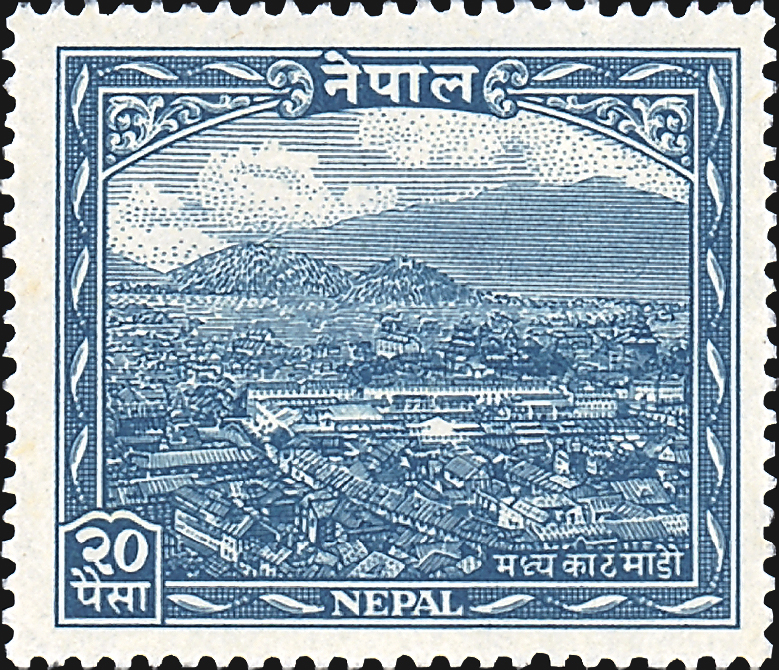 A view of Nepal’s largest city and capital, Kathmandu, depicted on a stamp from 1949. 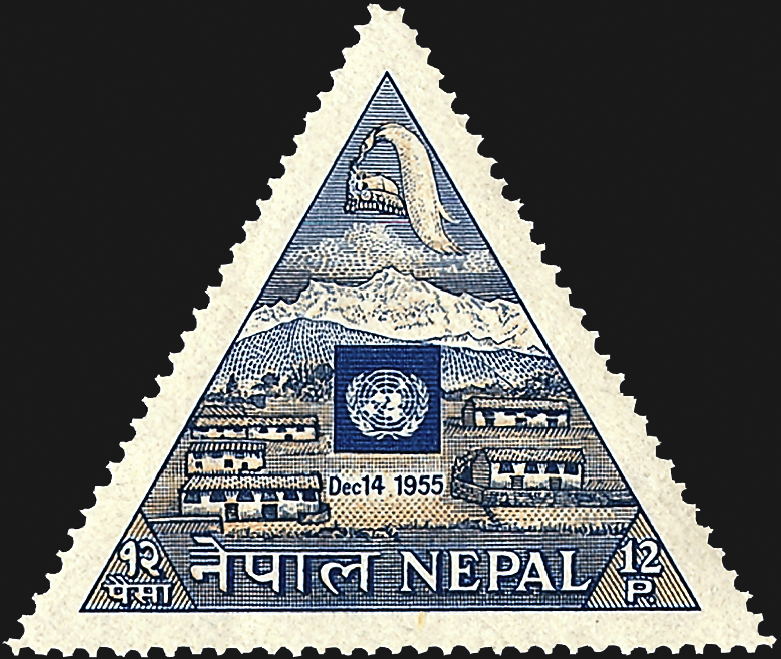 The shape of this 1956 stamp symbolizes Nepal’s Himalayan setting and shows a typical village. The stamp marks the first anniversary of Nepal’s admission to the United Nations. 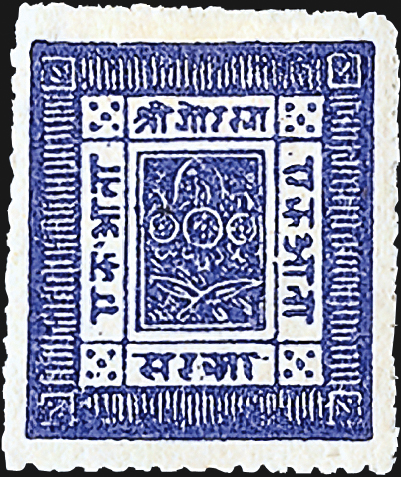 After using stamps of India for many years, Nepal issued its first stamp in 1881. The design shows a crown and two crossed khukris (traditional curved knives). 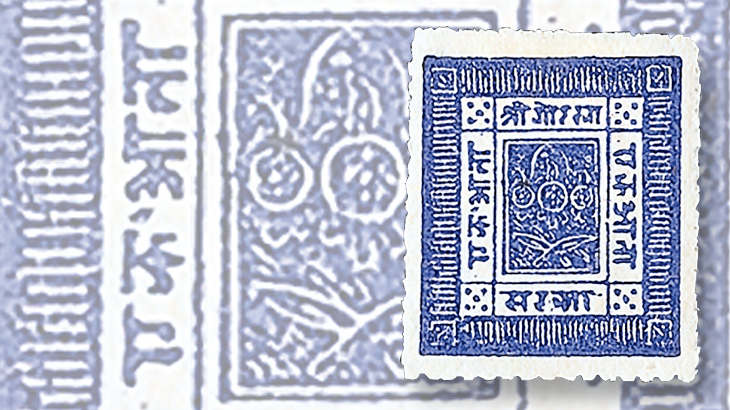 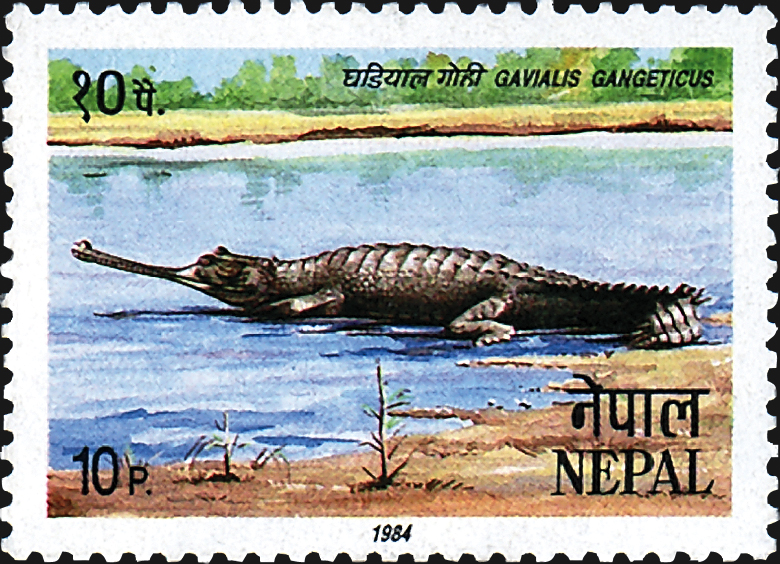 Impressively scary, a Nepalese gavialis gangeticus was one of a trio of 1984 wildlife stamps. 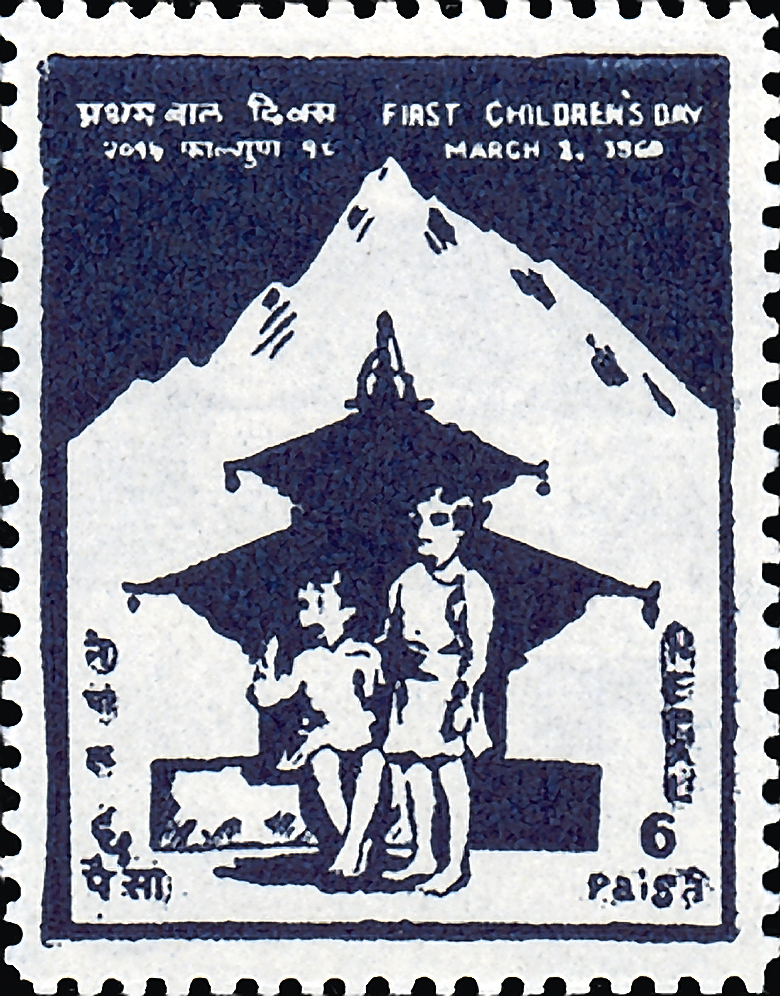 Children’s Day in 1960 was celebrated with a stamp showing three important Nepalese aspects: its children, its religion and its terrain.
Previous
Next

On April 25 of this year, the Federal Democratic Republic of Nepal in Southeast Asia experienced a devastating earthquake that took the lives of more than 8,000 people. An aftershock on May 12 led to further death and destruction.

How many people who watched the news reports of these devastating events knew where Nepal is and what the country is like? Those of us who are worldwide stamp collectors have an advantage, because we have learned global geography from our stamps.

The majestic Himalayas are a mountain range that covers almost all of Nepal. The highest mountain in the world is within Nepal: Mount Everest, at 29,029 feet, or a whopping 5.5 miles above sea level. The highest mountains in Nepal lie along its northeast boundary with Tibet; its southwest border is shared with India.

The usual version of Nepal’s earliest history is a combination of legend and what might have actually happened.

The army that was formed to do the fighting was extraordinarily well-trained and became highly effective and successful. Today we know this elite force as the Gurkha Army, which continues to defend Nepal and serves as peacekeepers for the United Nations. The Brigade of Gurkhas is a part of the Gurkha Army that served with the British Indian Army until 1947, when India became independent. The Gurkha Brigade also serves with the British Army and was instrumental in the latter’s victory during the Malayan Emergency (1948-60) and other Southeast Asia conflicts.

The history of Nepal is fascinating, and so is the history of the country’s stamps. A British/Indian Residency was established in Nepal in 1819, and international mail was sent from the Residency. Internal mail, mostly official documents, was carried by messengers.

Stamps of India were the first postal issues used in Nepal, beginning in 1854. Handstamped postmarks with the number 137 indicated that mail franked with Indian stamps was sent from Nepal. Finding Indian stamps with a Nepal cancel is not impossible — but it also is not easy.

It was decades later until Nepal issued its own postage stamps. The first, Nepal Scott 1, which is shown here, is a 1-anna ultramarine stamp issued with pin perforations in 1881. Pin perforations also are known as perce en points (French for “pierced in points”). They are made with roulette perforating equipment, and the perforations are very close together.

The 1a stamp shows a crown (sripech in Nepali) and crossed Gurkha khukris. The khukri (khukuri in Nepali) is the knife with a curved blade used as a tool and a weapon by the people as well as the army and Gurkha soldiers. It is a well-known national symbol of the country.

A second design was issued in 1899. The black-on-white example shown here is the ½a black stamp (Scott 10).

The front and back of a later 1a stamp printed on native wove paper issued in 1886 (Scott 7), is pictured here. Notice how the postmark struck on the front of the stamp is clearly visible on the back of the stamp.

These early stamps were crudely printed, and it is often difficult to make out the primary design.

The ½a black stamp depicts the god Siva’s bow and below it the crossed khukris. To easily see what a khukri looks like on a stamp, fast forward to 1994’s Nepalese traditional weapons stamp (Scott 547).

Often the most interesting stamps are those that show what the issuing country looks like, the native flora and fauna, the people they honor and the traditions they hold dear.

Nepal’s most appropriate stamp to represent the country to the rest of the world may be the one issued in 1956 to mark the first anniversary of Nepal’s admission to the United Nations. The tall triangular stamp (Scott 89) echoes the majestic Himalayas and depicts a mountain village.

Thousands of people died in the recent spring earthquakes in Kathmandu, the largest city and capital of Nepal, and many of its ancient buildings and UNESCO World Heritage sites were destroyed. A view of the city in 1949 is shown on a 20-piasa stamp (Scott 56) issued that year.

A rather primitively drawn but charming design on a 6p stamp (Scott 125) issued in 1960 to celebrate Children’s Day depicts two children in the foreground with the silhouette of a temple behind them and Mount Everest in the background. This issue portrays three important Nepalese topics: its people, its faith and its land. One little postage stamp has a lot of meaning to convey!

An interesting animal in the crocodilian family appears on a 1984 stamp from Nepal (Scott 425), as one of a set of three wildlife issues. The gavialis gangeticus, also known as the fish-eating crocodile, is a fascinating creature found in small numbers in Nepal. The animal can grow to be 20 feet long, with a long, thin snout that contains more than 100 sharp teeth. (Admire it in safety on its stamp.)

To learn more about the stamps of Nepal, contact the Nepal and Tibet Philatelic Study Circle.