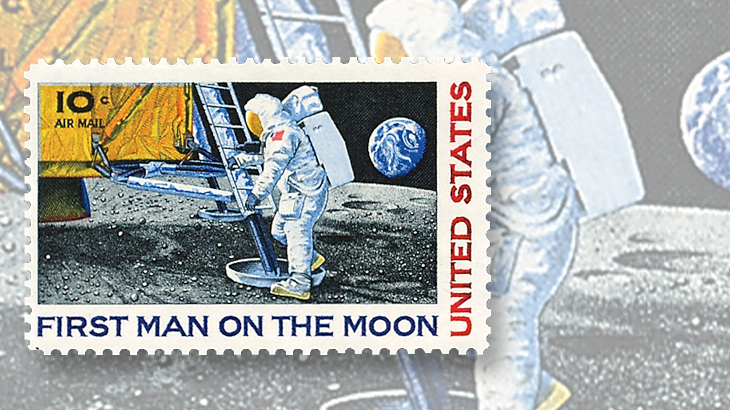 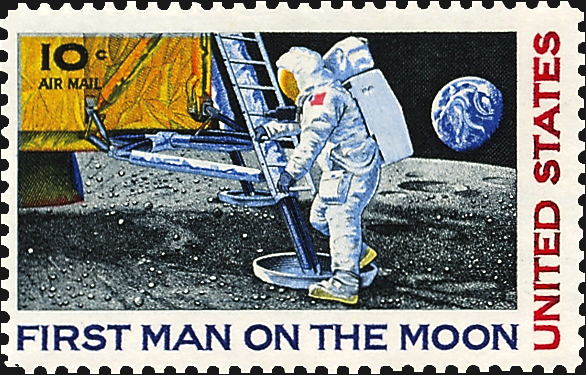 Celebrating the United States’ achievement of putting men on the moon and returning them safely to Earth, this 1969 10¢ airmail stamp was much anticipated and very popular with the American public.

The 10¢ stamp on this cover pays the first-class rate in August of 1974, but where is payment for the other services provided? 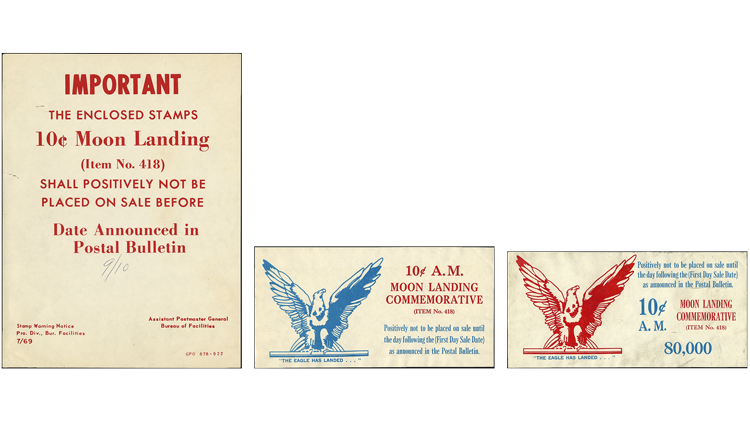 These Post Office Department notices were used to try to prevent premature release of the 1969 Moon Landing airmail stamp prior to its Sept. 9, 1969, issue date. 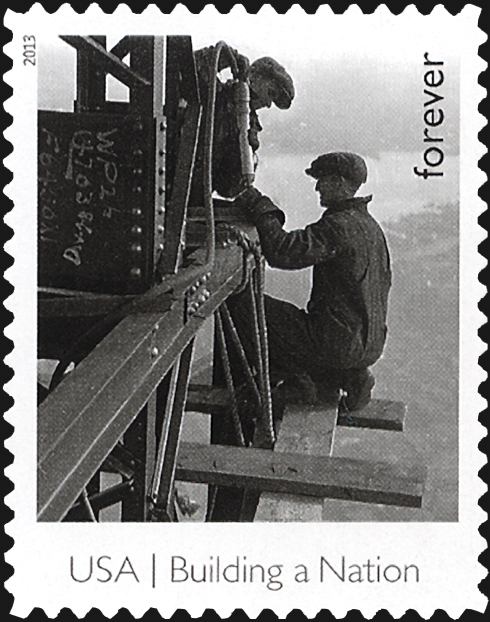 The cartoon caption contest for August is this 2013 stamp showing riveters working on one of the higher floor frames of the Empire State Building. Picture yourself in that situation, and tell me what you might be thinking or saying about your chances of having a long and successful career among the girders, or the future of philately, or anything else that strikes you. The rules to enter the contest are in the accompanying article. Entries must be received by Aug. 24 for a chance to win a prize.
Previous
Next

Among the most anticipated United States stamps of the 1960s was the Moon Landing issue (Scott C76).

This 10¢ airmail stamp was issued Sept. 9, 1969, to celebrate the first manned moon landing earlier that year, on July 20.

The stamp’s design was created by Paul Calle prior to the monumental space journey. In painting the scene, Calle was inspired by his observations of the Apollo 11 crew in training.

An engraved master die for the issue was carried by the astronauts to the moon and back, and served as the medium from which the printing plates used to produce the stamp were later made.

The story must have received wide distribution well beyond the usual philatelic community, and it is a safe bet that the staff at post offices received more than the usual number of inquiries about the availability of the Moon Landing stamp.

Because of this, prevention of early release of the stamp was a challenge, and it seems that the Post Office Department took extra steps to assure that the stamps were held until the Sept. 9 issue date.

Rarely do we see the internal materials instructing postal personnel what to do with stamps received for future issuance, but three notices used to alert postal clerks that the Moon Landing stamps were embargoed are shown nearby.

The large 8½-inch by 11-inch notice was probably a tack board reminder, while the two smaller 7½-inch by 3¾-inch notices were included in packets of yet-to-be-issued stamps being sent to post offices.

It is hard to believe that the postal clerk who handled the cover shown nearby would think that certified mail was provided at no charge, but yet only 10¢ in postage was paid for this cover mailed Aug. 13, 1974.

The 10¢ stamp paid the first-class rate at the time. Also due would have been 65¢: 35¢ for certified mail and 30¢ for the requested return receipt.

Tape stains on the front and back of the cover show that a return receipt was properly taped to the cover and was removed upon receipt. Thus the cover seems to have been delivered without being charged postage due.

Could there be any explanation for this cover, other than the postal clerk having a bad day or being new to the job? If so, I can’t imagine what it would be.

Some of the most unnerving photographs from the early era of building skyscrapers are the shots of men working on the frame of the 102-story Empire State Building in 1930-31.

This was long before today’s safety requirements, yet only five people died on the work site during construction — and only one of those fell from a scaffold.

Yet I get a queasy feeling looking at those photos, and I bet that isn’t unusual. Among the photographs by Lewis Hine reproduced on the 2013 Building a Nation pane of 12 is one showing riveters working high up on the Empire State Building (Scott 4801h).

I have selected that stamp for the August cartoon caption contest.

Picture yourself a thousand feet in the air, rivet gun in hand, trying not to think about the distance to the ground. Then tell me what you might be thinking or saying about your situation, about how you earn your daily bread, about parallels to politics, or about anything else that occurs to you.

For each winner, the prize will be the book Linn’s Stamp Identifier, published by Linn’s (a retail value of $12.99), or a 13-week subscription to Linn’s (a new subscription or an extension). To be considered for a prize, entries must reach Linn’s no later than Aug. 24.