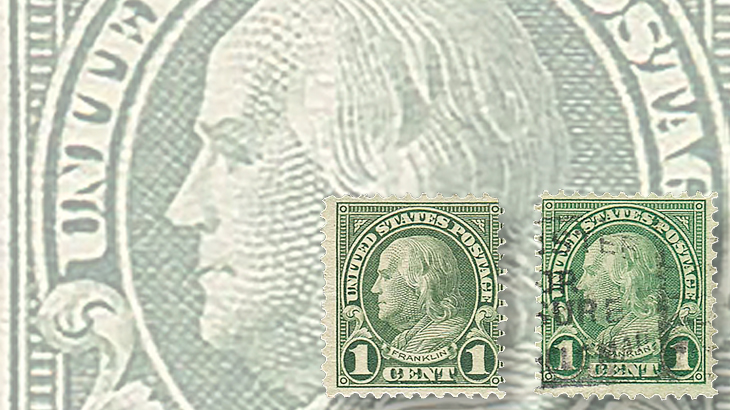 Two examples of a 20th-century rarity, the 1923 1¢ green perf 11 Benjamin Franklin stamp from coil waste, will be auctioned by Regency-Superior during the American Philatelic Society’s Stampshow in Grand Rapids, Mich. 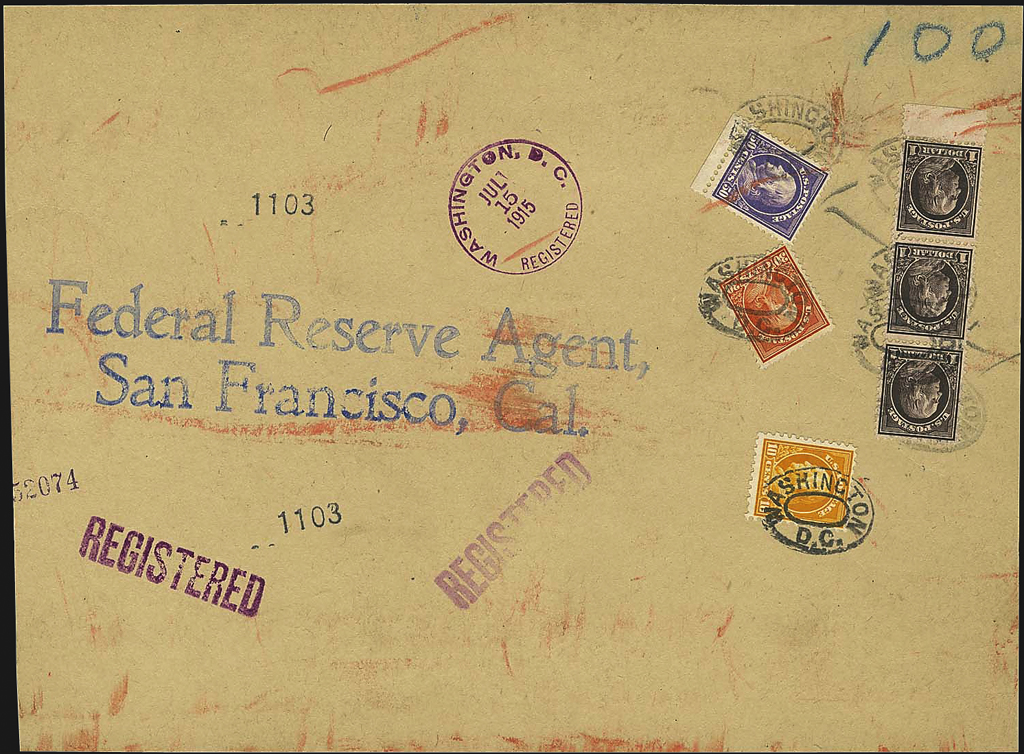 The July 15, 1915, earliest-documented use cover for the 1915 $1 violet brown Franklin will be auctioned at the American Philatelic Society’s Stampshow in Grand Rapids by Regency-Superior.
Previous
Next

If you’re hoping to fill that empty album space for United States Scott 594, you now have a decision to make: unused, or used?

The Aug. 22-23 Regency-Superior auction at the upcoming 2015 American Philatelic Society Stampshow in Grand Rapids, Mich., offers one example in each condition of the scarce 1923 1¢ green perf 11 Benjamin Franklin stamp created from coil waste.

Unused or used, the stamp can be hard to find, so it’s a nice treat to encounter these two in the same auction.

The unused stamp has the bonus characteristic of “part original gum,” which is unusual: The 2015 Scott Specialized Catalogue of United States Stamps and Covers specifically notes that the main listing for Scott 594 unused is for an example without gum. The listing “with gum” carries a catalog value of $65,000 for a stamp “with perforations just touching frameline on one side.” Without gum, the value drops to $35,000.

This stamp, listed in the auction with a $45,000 estimate, is described as having deep rich color and fine appearance with a tiny thin spot at upper left. It’s just one of 18 unused examples recorded, “nearly all with small faults.”

Two Philatelic Foundation certificates of authenticity from 1971 and 2008 accompany the stamp.

Its postally used partner is valued at $10,500 in the Scott U.S. Specialized catalog, with the same perforations description. The auction estimate for the example on offer is $13,500. The stamp is described as fine to very fine, with a neat slogan cancel, and is authenticated with a 1995 Philatelic Foundation certificate.

Regency-Superior President David M. Kols notes in the auction catalog introduction that the upcoming sale is one of the largest in the firm’s history.

“You’ll find everything from world-class rarities to affordable material of interest for all levels of collectors,” Kols states.

There are some attractive U.S. favorites in this sale, including the 1916 5¢ George Washington carmine error vertical pair (Scott 467). These 5¢ stamps popped up in a 2¢ pane of 100 when a 5¢ transfer roll was used to re-enter three subjects on the plate (including one that’s found on its own in a different part of the pane).

This example is neatly trimmed all around the 5¢ pair to show parts of all 10 2¢ stamps that surround the 5¢ stamps. Both of the error stamps are extremely fine to superb, and mint (never-hinged). The Regency-Superior estimate on this lot is $8,000; it is accompanied by a 2013 Professional Stamp Experts graded certificate (XF-Sup 95).

The U.S. postal history selection in this auction includes 45 lots of earliest-documented use covers ranging from 1879 through 1923.

One very sharp example is the earliest-documented use cover for the 1915 $1 violet brown Franklin (Scott 423) in a strip of three franking a large part of a parcel front addressed to “Federal Reserve Agent, San Francisco, Cal.” Additional postage consists of three single stamps, the 10¢ orange yellow (416), the 30¢ orange red (420) and the 50¢ violet (422).

The stamps are struck by multiple Washington, D.C., double oval postmarks, and the parcel front shows a magenta Washington, D.C., July 15, 1915, circular datestamp. Multiple ‘Registered’ straight-line handstamps are also applied. The cover front is authenticated by the American Philatelic Expertizing Service, with a 2000 certificate. It is offered with an estimate of $5,000.

There is a strong selection of U.S. postal history that includes airmail and special delivery covers, classic first-days, political covers and much more.

The worldwide material also offers classic and modern singles and sets, along with a selection of postal history that includes worldwide and U.S. zeppelin covers.

More than 600 collections and box lots will be auctioned as well.

The auction and the APS Stampshow are taking place at the DeVos Place Convention Center, 303 Monroe Ave., NW, in Grand Rapids.