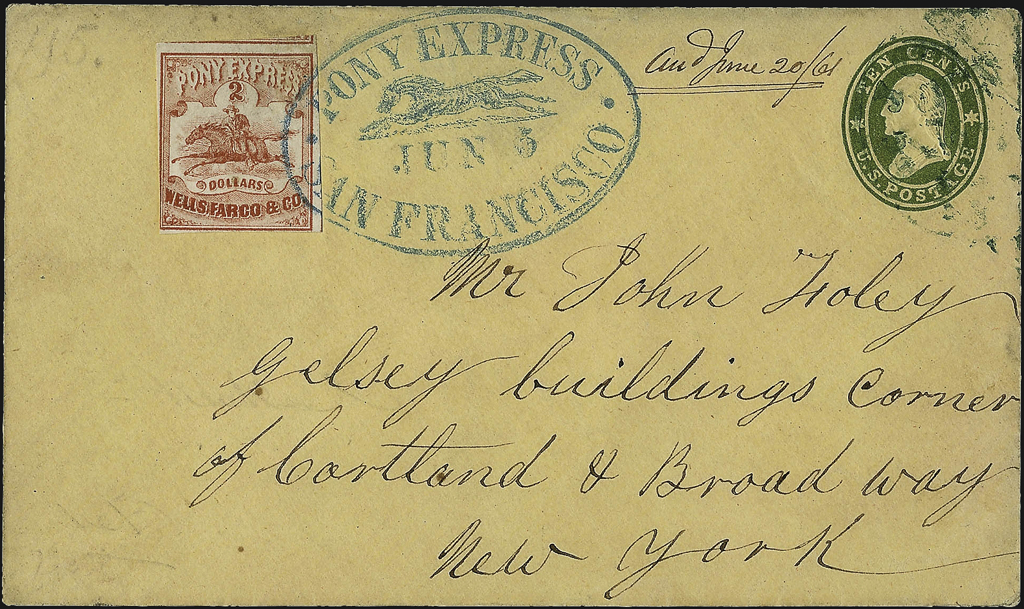 Sold by Siegel during Rarities Week in June, this transcontinental Pony Express cover with a “running pony” datestamp of June 5, 1861, was hammered down for $20,125. 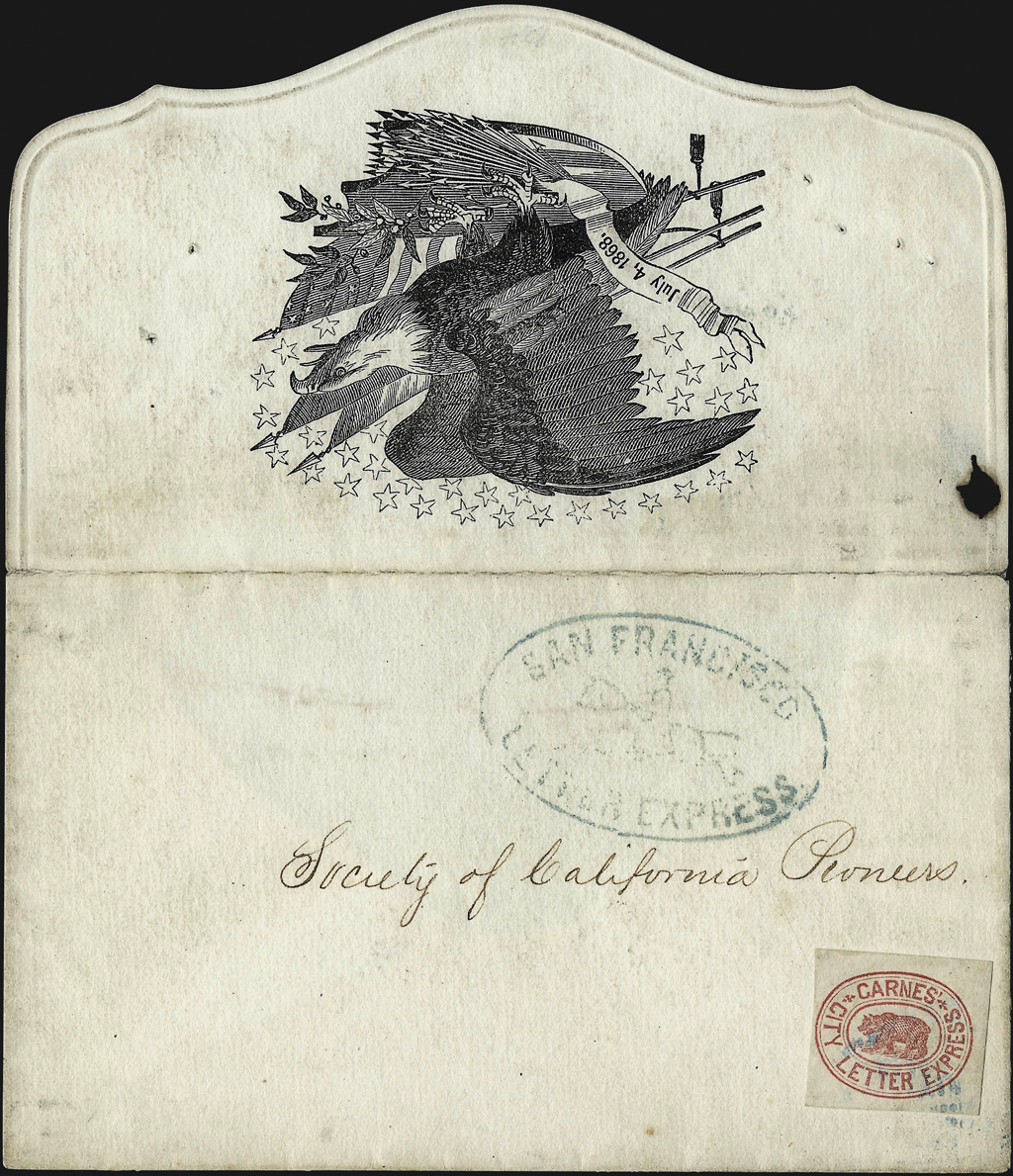 “One of the rarest and most spectacular of all American local post covers,” ex-Larry Lyons, this 1868 cover sent via Carnes’ City Letter Express in San Francisco, franked with a red oval imperforate stamp, sold for $29,900 at the Siegel sale on June 24. 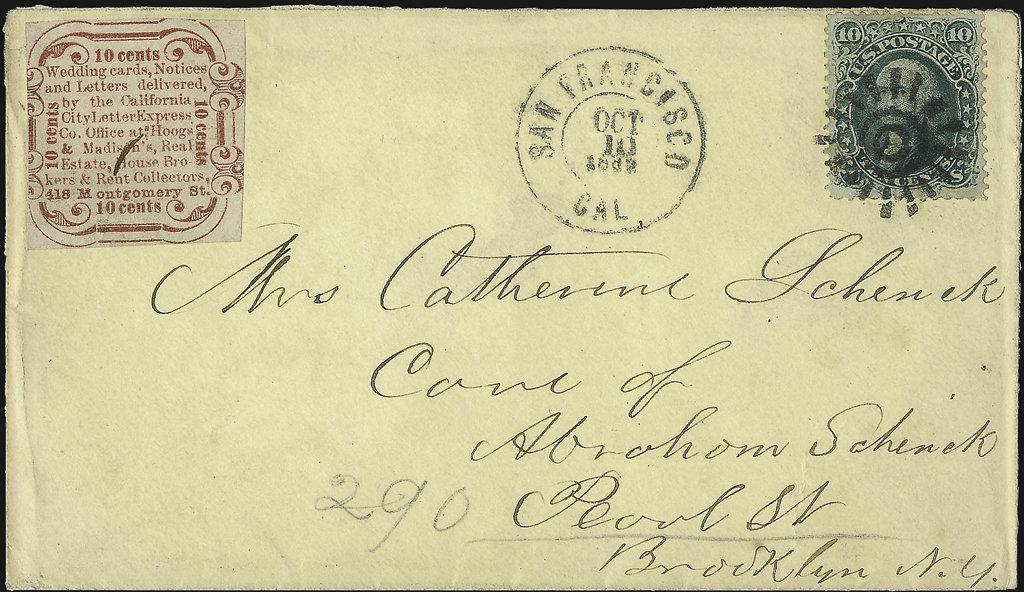 This scarce example on cover of the red California City Letter Express Co. stamp is even more unusually paired with a U.S. stamp. From Siegel’s June sale of the Larry Lyons collection, it sold for $27,600.
Previous
Next

June 24 at Robert A. Siegel Auction Galleries saw the sale of Larry Lyons’ “All Roads Lead to San Francisco” collection, which documented private and local couriers operating west of the Rockies.

Lyons, like Gordon Stimmell an editor of The Penny Post and also an executive director of the Philatelic Foundation, has published dozens of articles and won numerous high awards in this and other collecting areas, including the American Philatelic Society’s Champion of Champions exhibiting prize.

The top item was a beautiful invitation envelope, opened out for display to show the fancy die-cut and ornate engraving of a heraldic eagle on the back flap, sent via Carnes’ City Letter Express in San Francisco in 1868. The cover is franked at lower right with a red oval imperforate stamp (Scott 35L1), showing a bear in the center and the name of the courier firm around it.

Called by Siegel “one of the rarest and most spectacular of all American local post covers,” it sold for $29,900.

“The local-post scene in San Francisco during the 1863-67 period is confusing to reconstruct, due to the similarity of names among competing posts and the changes in ownership,” explains the sale catalog. Indeed, the cover dates from a period in which Carnes’ post had been taken over by a man named William Loomis, who later altered the Carnes stamps to remove the old name.

Another cover, dated 1862, bore one of just a handful of the known examples of the red stamp with a wordy design issued by the California City Letter Express Co. The stamp (Scott 33L1) also came in blue or green (33L2-33L3), with variations in the text and side ornaments. All are either very scarce or unique.

The cover in Siegel’s Lyons sale is one of three known bearing this red stamp and the only one where it is used in conjunction with a U.S. stamp (the 10¢ green of 1861, Scott 68). A handsome transcontinental cover addressed to Brooklyn, it fetched $27,600.