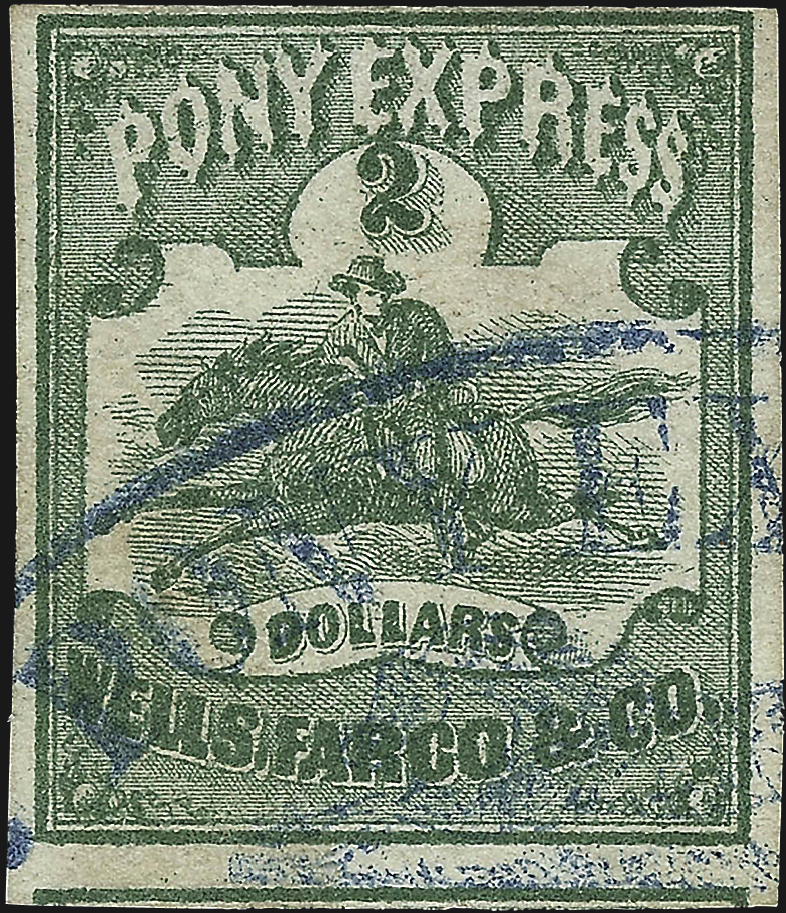 A used $2 green stamp of the Wells, Fargo & Co. Pony Express service from the Gordon Stimmell collection is one of only some 10 known. It sold for $12,650 during Siegel’s Rarities Week in June. 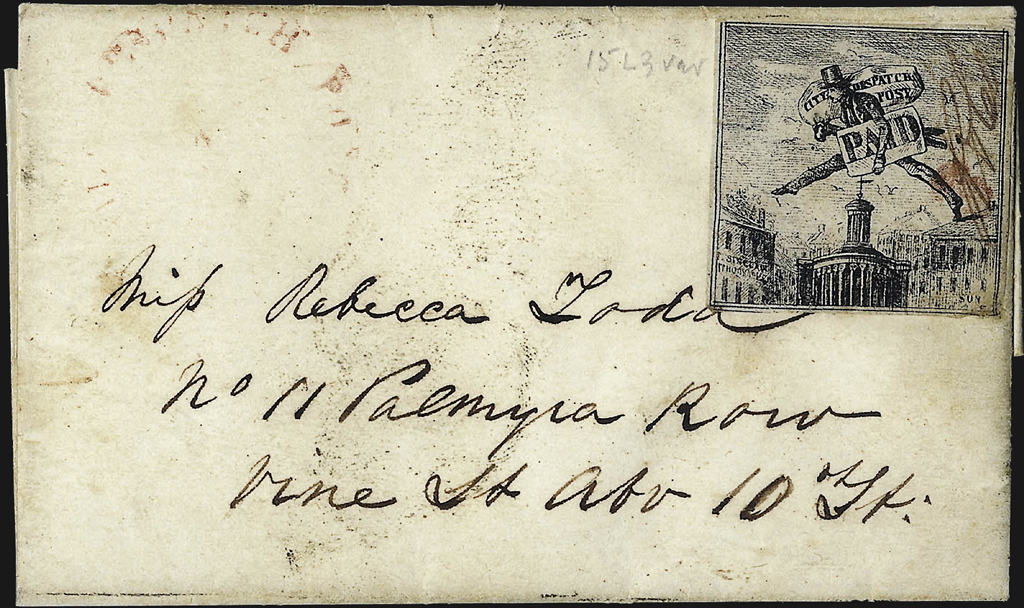 Also from the Stimmell collection of carriers and locals, this folded letter from May 1844 was carried across the city by the Philadelphia Despatch Post, franked with the “Striding Messenger” stamp. Siegel sold the letter for $1,495 on June 23. 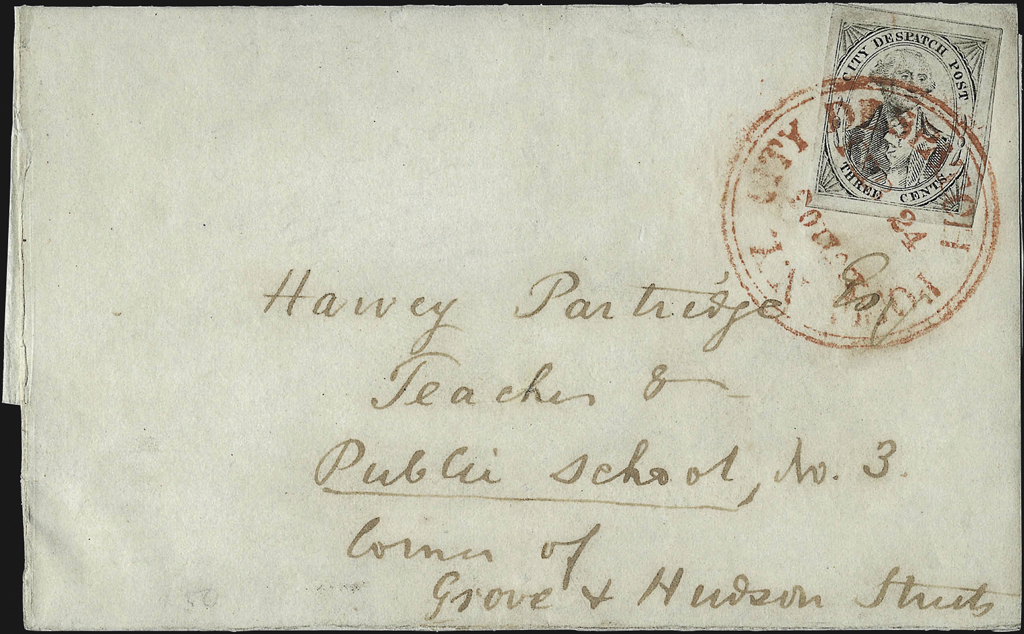 From the Gordon Stimmell collection of carriers and locals, this 1842 cover sent via Greig’s City Despatch Post in New York City brought $3,738 when offered by Siegel in June.
Previous
Next

The name sales began June 23 with Gordon Stimmell’s collection of U.S. carrier and local stamps, built over many years with items whose provenances include famous names such as Ferrary, Caspary and others.

Many of the stamps are scarce or rare, and the collecting area requires considerable diligence and research to weed out the forgeries and bogus creations that plague it.

Stimmell was a founder of the Carriers and Locals Society at the Collectors Club of New York, and for many years edited its journal, The Penny Post.

“Gordon’s proudest accomplishment came in 1995 when he published an article revealing that 52 of the local stamps depicted in the Scott Catalogue were forgeries,” wrote Siegel president Scott R. Trepel in the introduction to the sale catalog. “He ran images of the real stamps in his article, and the Scott folks replaced all their bogus cuts with the real images after years of dealers and collectors being fooled.”

One fascinating aspect of carriers and locals is that the earliest ones predate the first U.S. government postage stamps of 1847. A lovely cover, sent via Greig’s City Despatch Post in New York City in 1842, marks an early use of its 3¢ black stamp on grayish paper (Scott 40L1), which is tied by a scarce style of red postmark to a letter addressed to a schoolteacher in Greenwich Village. The cover sold for $3,738.

Greig’s service was later taken over by the U.S. post office, and its stamps became forerunners of U.S. stamps.

A Philadelphia letter describing riots occurring in May 1844 was sent across town franked with a “Striding Messenger” stamp of the Philadelphia Despatch Post (Scott 15L3), which shows a top-hatted courier, mailbag flung over his shoulder, leaping over the city’s rooftops. The cover sold for $1,495.

The stamp is described as having been the world’s first pictorial stamp: Early adhesives generally showed portraits, numerals or coats of arms.

Early versions of the stamp are endorsed “R & Co.” (for Robertson & Co.) in pen. When Daniel Blood took over the local post in 1845, his name was added to the stamps, first in manuscript and then engraved. A version of the stamp inscribed “D.O. Blood & Co.” over the striding courier (Scott 15L5), affixed to a lovely decorative black-and-white Valentine envelope, fetched $5,463.

A used $2 green stamp (Scott 143L4) of the Wells, Fargo & Co. Pony Express service was another highlight of the locals.

Wells Fargo carried mail on horseback between St. Joseph, Mo., and California for about 18 months in 1860-61, before the completion of the transcontinental railroad made the service obsolete. Because the service was under government contract, the stamps that prepaid the letters are considered semiofficial issues.

Riders took the mail in relay stages across the plains, mountains and deserts of the West, sometimes encountering Indian attacks and natural hazards, in one of the most romantic episodes of U.S. mail-transport history. The service cut the time it took a letter to get from east to west from over a month to under two weeks.

Not surprisingly, the service was expensive for the time, starting at $5 per half-ounce. Stamps were first printed in denominations of $2 (red) and $4 (green), and when rates were cut in half during the second part of 1861, printed with values of $1 (red), $2 (green) and $4 (black).

All the stamps are considerably scarcer used than unused. The Siegel firm estimates that only about 10 used examples of the $2 green have survived; the example in the Stimmell sale, which boasted four margins including three ample ones and a partial blue “running pony” oval datestamp, went for $12,650.