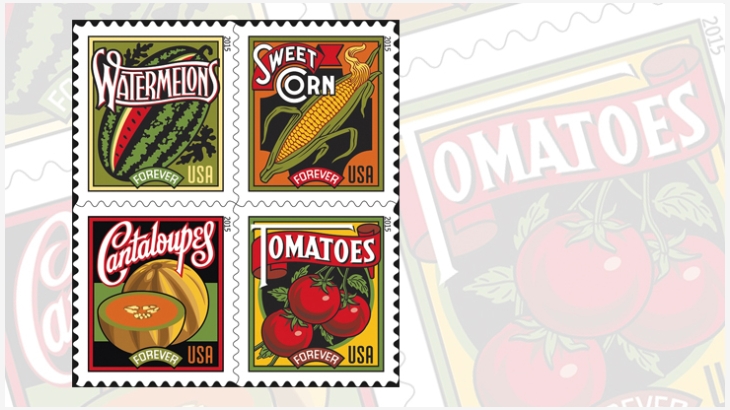 The Atlantic's Steven Heller wrote on July 18 that the U.S. Postal Service's Summer Harvest stamps appeal to the "renewed interest in organic and locally sourced food" and young-ish folks who might be more prone to using the stamps:

Antonio Alcalá, the art director at CSAS, said the group had two main audiences in mind when designing the new Forever stamps: foodies, and nostalgics. The stamps’ decorative lettering and stylized images of watermelon, cantaloupe, sweet corn, and tomatoes seem aimed at the stereotypical modern yuppie, who listens to records on vinyl, visits the local farmer’s market, shops for antiques, and might even occasionally forgo the ease of Gmail or Facebook in favor of writing and mailing a handwritten letter.

Read the full post from The Atlantic: Can Design Help the USPS Make Stamps Popular Again?

3. Which Scott catalog is right for you?

"A question frequently asked by Linn’s readers is, 'Why isn’t this stamp, variety, cover and so on listed in the Scott Standard catalogs?'"

Neil Armstrong and Buzz Aldrin landed on the moon on July 20, 1969. Of course, there's a stamp for that:

"One 33¢ stamp in the 1960s Celebrate the Century stamp pane issued Sept. 17, 1999, commemorates the successful landing of two American astronauts on the surface of the moon 30 years earlier (Scott 3188c)."