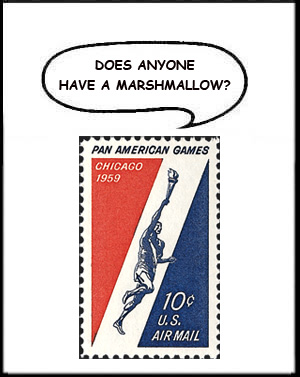 When e-mail became a well-accepted way of communicating, we suggested that cartoon caption contest entries be sent in using the computer. About a third of the entries are now received in that form.

Unfortunately, that leaves two-thirds that can get lost in the snail mail, and that has been a problem with the June contest.

Each week Linn’s at its headquarters in Sidney, Ohio, sends me (in Virginia) the latest issue of the newspaper, together with contest entries and letters from readers received that week.

For the first time in years, one of those weekly mailings has gone astray — the one that usually has the bulk of the contest entries for the month.

In the past, one of these mailings has come to me as much as six weeks late with no explanation. So, I’m hoping it may yet arrive, but I don’t feel I can delay the cartoon contest report based only on hope.

Thus, this report will be shorter than usual because the number of entries I received is less than half the usual amount.

The stamp for the June contest was the 10¢ airmail issued in 1959 to promote the Third Pan American Games being held in Chicago that year.

The design features a torch-bearing runner, a commonly understood representation of the opening of international athletic events.

Not surprisingly, the subject of fire interested most of the readers who entered.

Michael Moticha of Apple Valley, Calif., summed it up nicely with “Don’t lick-and-stick me! You’ll burn your tongue.”

On the stamp design, the torch bearer looks cramped, sandwiched between the vertical red and blue triangles, and that inspired the philatelic winner, Mildred Barylski of Alexandria, Va., whose line is, “It sure would be easier to run if this stamp were horizontal!”

On the nonphilatelic side, winner Stephen Finkelstein of Teaneck, N.J., has the runner thinking about a practical use for his torch.

“I was hoping for a sporting goods company endorsement, but I’ll settle for an underarm deodorant contract,” by Steve Kotler of San Francisco.

“Who in their right mind scheduled the marathon at night?” from Joe Krafty of Mechanicsburg, Pa.

“Yes, Mrs. O’Leary, I heard you. No open flames near the barn,” by Paul Rogacz of Sterling, Mass.

“If I hurry, I’ll be first in line for the new rate stamps,” from Mike Lantz of Kingston, Ontario, Canada.

Another by Steve Kotler asks, “What do you mean, no shoes, no service?”

The next cartoon caption contest will be announced in the Aug. 10 Linn’s.