When should you pursue expertization of a stamp or cover? 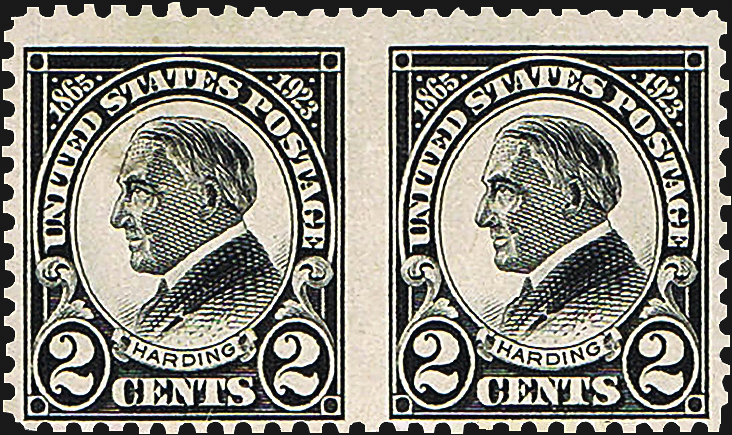 This horizontal unused (hinged) pair of 2¢ black Hardings, imperf between, does not correspond to a Scott catalog error listing. 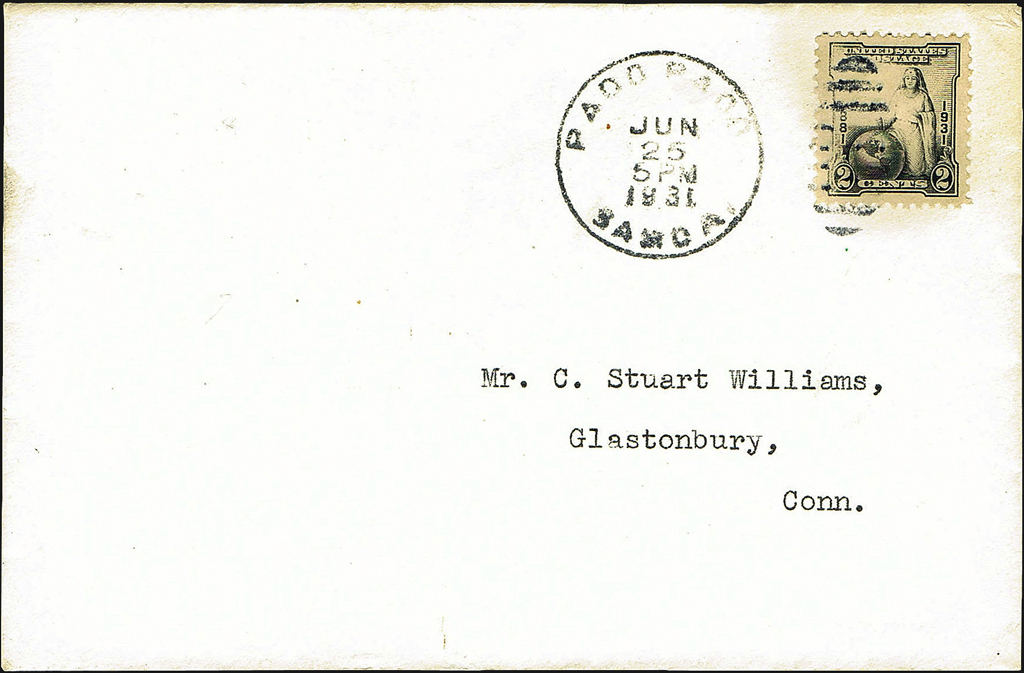 Only one example is known of the red-cross-missing error of the 1931 2¢ Red Cross stamp. Is this a new discovery of that error? 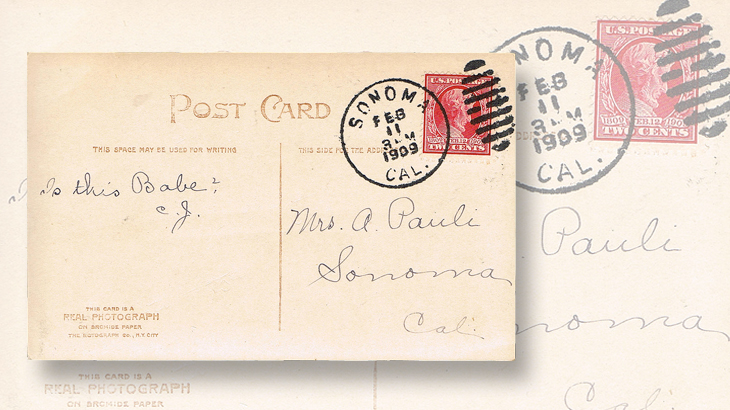 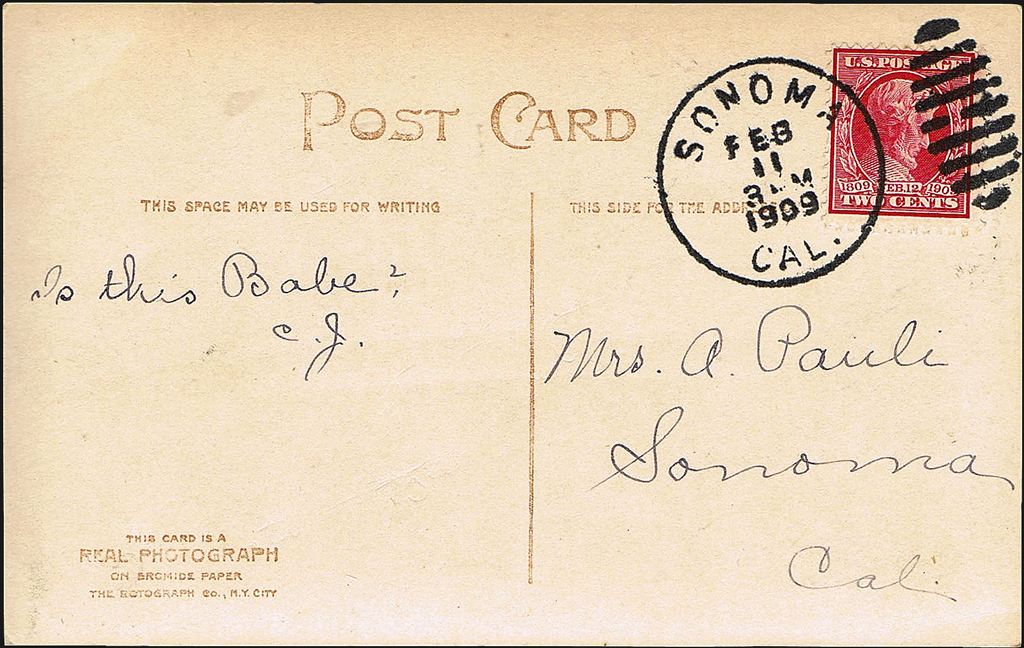 Is this a genuine pre-first-day cover for the 1909 2¢ Lincoln Centenary stamp?
Previous
Next

Several readers have asked: In what situation should a stamp or cover be expertized?

I could write several long and wordy columns on this subject, but a more meaningful way to approach it may be to show some examples over the next several columns, and say a bit about why these items need to be expertized.

When something is improbable, as with the three items shown with this column, the better part of valor is to approach it from a skeptical perspective.

The first cover pictured here purports to be canceled in Sonoma, Calif., on Feb. 11, 1909. The established first day for the 2¢ Lincoln Centenary stamp is Feb. 12.

The stamps were shipped to postmasters on Jan. 28, with instructions that they be placed on sale Feb. 12. While not out of the question that there could have been an early release, it is not likely after all these years that a new certifiable earlier date would be found.

Indeed, this candidate for earliest known use failed certification with a finding that the cancellation had been drawn in.

The illustrated pair of 2¢ black Harding stamps might make the heart of a philatelist skip a beat. Perf 11 Hardings are either Scott 610 (flat plate), or the extremely rare Scott 613 (rotary press version). To be the latter, the stamps have to be taller than the flat plate version. Careful measurement with a millimeter gauge eliminates that possibility.

This example looks like a normal horizontal pair of Scott 610 that is imperf between.

The Scott Specialized Catalogue of United States Stamps and Covers lists horizontal pairs that are imperf vertically, but not imperf between. The perforation measurement on this pair is wrong, at 11.5 by 11.5, so this turns out to be a fake, made from the flat plate imperforate version (Scott 611).

Looking at the stamp shown nearby under 30-power magnification, it is evident that the red cross was abraded off the stamp while it was on the cover. This became obvious when looking at the cancellation above the area of the red cross; it has been worn away and then recreated using ink that is a slightly different color than the postmark ink used over the black-only part of the stamp.

So, the lesson for today is this: If something seems too good to be true, it probably is, and a skeptic’s review via expertizing will often reveal problems that disqualify it.

In this column in the May monthly issue of Linn’s, I ventured into a minefield: the issue of dealer/auctioneer practices in handling buyer requests to have purchases expertized. This earlier column was prompted by several readers who had bad experiences.

The complaints were that some dealers and auctioneers had policies that were not customer friendly, and some seemed to punish buyers for wanting to make sure that their purchases were genuine, even to the point of refusing to do future business with those customers asking for certificates of authenticity.

While undoubtedly a minority in the dealer community, dealers engaging in such practices reflect badly on all, so in the earlier column I had suggested that the American Stamp Dealers Association draft a set of recommended policies that encourage consistency and a proper balance between the rights of dealers and the rights of buyers.

I’m glad to report that ASDA president Mark Reasoner and his board of directors are engaged in a project to do just that.

While understanding that adopting a set of policies will not cure all the ills in this realm, I believe there is value in establishing a baseline, both to govern dealers and auctioneers and to establish norms for buyers.

In the course of talking with dealer friends about this subject, I was shown a good model for such a document by Stephen T. Taylor, a postal history dealer of mostly United States material who is based in Surrey, England.

Taylor has a presence at most of the larger U.S. shows, and I have been a happy customer of his for many years.

He has kindly agreed to let me publish his expertizing policies as an example of what I hope ASDA will cover in an industry-wide recommendation.

In reading them, keep in mind that putting an item “on extension” is how the trade refers to delaying final payment for a specified item pending receipt of a certificate.

“All items are sold as genuine (unless described otherwise) and ‘as described,’ and can be returned within 14 days of purchase with original plastic sleeve and invoice (or copy of credit card receipt) if not as described.

“Any item without a Philatelic Foundation or American Philatelic Expertizing Service certificate issued within the past five years can be placed on extension.

“Terms and conditions regarding extensions (1) Purchases must be paid in full before placing on extension,

“(4) Item(s) must be sent for expertization within 7 days of receipt and a copy of the application mailed, faxed or emailed to me (or I can send the item directly if preferred),

“(5) Item on extension is at buyer’s risk in case of a loss if not sent by me (If sent by me, my dealer’s insurance policy covers it for the purchase price),

“(6) Unless advised otherwise by fax or email, items are assumed to have cleared after 90 days,

“(7) A full refund of the purchase price plus the cost of the certificate and postage (if sent by you) will be made if the item is ‘not as described’ or a partial refund to be agreed if you would like to keep the item,

“(8) A not-as-described item must be returned with original plastic sleeve, a copy of the purchase invoice or credit card receipt, and the expert committee certificate. Refund will be issued immediately upon receipt of returned item and refunded to your credit card (if paid by card) or US check mailed to you if paid by check or cash,

“(10) Buyer is responsible for the cost of the certificate and postage (if sent by me) in the case of an ‘as described’ opinion.”

Because auctioneers often deal in high-end material, most have developed and publish their policies under their terms of sale.

Net-price dealers are less likely to have published policies, but it is a good idea to ask if there is one when buying expensive stamps.

Taylor’s policies are published on his website, and he points them out to anyone asking about sending a purchased item for expertizing.