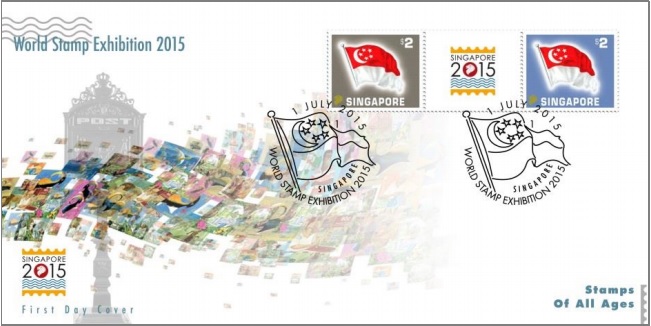 Singapore Post is honoring the 2015 World Stamp Exhibition with some high-tech new stamps that are attached here to a pre-cancelled First Day Cover.

To mark Singapore’s hosting of the 2015 World Stamp Exhibition, Singapore Post is putting out some high-tech new stamps.

"In conjunction with this stamp issue, SingPost will ... issue limited edition Special SG50 Collectors’ Sheets that use augmented reality to bring the stamps to life," a SingPost press release reads. "They not only provide a different and interesting way to learn about Singapore’s story, they also make for cool collectibles."

What does "augmented reality" mean? It means that when the stamps are scanned with a smartphone, a pair of related videos can be viewed.

"Actor and philanthropist Paul Newman will be honored on a United States commemorative forever stamp Sept. 18."

"The famed Locket Copy of the Inverted Jenny, the United States 24¢ airmail stamp of 1918 with the biplane in the center printed upside down in error, was sold in New York on May 20."

"The television game show Jeopardy! featured a Stamps category in its episode broadcast nationally June 29. It's at least the third time this year that stamps have appeared on the popular syndicated program."