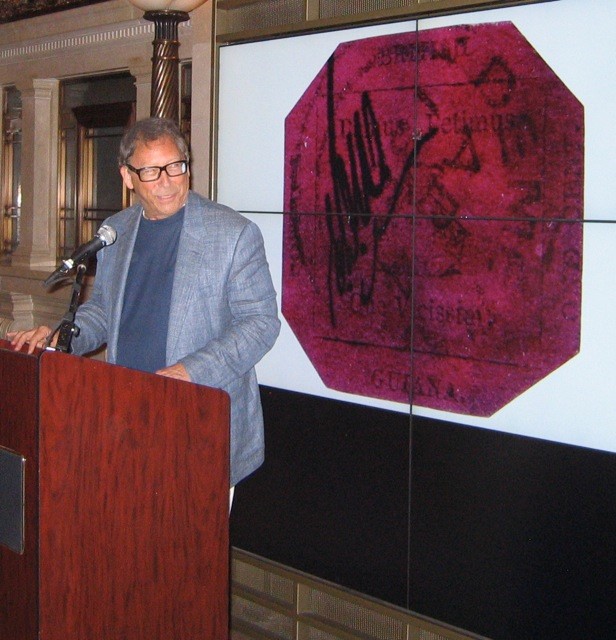 Stuart Weitzman, owner of the famed British Guiana 1¢ Magenta, told attendees at a reception at the National Postal Museum June 7 that he has no plans to sell the stamp after it completes its three-year run at the museum.

Weitzman’s comments came during a reception at the Washington, D.C., museum as his stamp, called the rarest stamp in the world, was formally welcomed to the Smithsonian Institution on June 7.

“For me, three years was a long-term plan,” the noted shoe designer said.

“I don’t think so,” Weitzman said when asked if he plans to sell the stamp. “I don’t see why.”

“You never know where circumstances will lead you,” he said, adding, “I have never sold anything I bought in my lifetime.”

Asked if he was worried that some of the fates that befell previous owners of the stamp might impact him, he said no.

“Number one, I am not superstitious,” he said.

“Number two, I didn’t really follow them,” he said the of the previous owners.

As for John E. du Pont, the stamp’s previous owner, who died in a Pennsylvania prison where he was serving a sentence for murder, Weitzman said he was “a crazy man” who was foolish enough to kill someone in front of a lot of witnesses.

“I don’t figure that had anything to do with the stamp,” Weitzman said. “He was just a crazy guy.”

Asked whether the stamp has faded, he said, “I never saw it in its original form.”

“If you look at the pictures you wouldn’t think it faded,” he said.

He noted the stamp is shown only under special lighting, noting it is almost 175 years old.

“You and I would fade if we were in there, too,” Weitzman said.

During his remarks at the reception, hosted by the museum’s Council of Philatelists, Weitzman offered more details about why he had selected the Washington museum over the British Museum in London to house the stamp.

He said he bought the stamp in the first place because he didn’t want to see it back in British hands.

Second, officials at the National Postal Museum told him twice as many people were likely to see the stamp in Washington than the London museum had predicted.

In Washington, “the stamp will get the attention it deserves,” he said.

Weitzman said he wasn’t a stamp collector, although he recalled having a stamp album as a youngster and longing to fill the empty spaces on the British Guiana page.

The NPM said attendance at the William H. Gross Stamp Gallery where the 1¢ Magenta is housed has improved markedly since the stamp first went on display June 4.

Few people came to see the stamp on that date because the display had received little attention in the Washington media, museum officials said.

As more people learn that the stamp is at the museum, the crowds will grow, they said.

It is scheduled to be at the NPM until November 2017. That will be the longest showing ever for the fabled stamp.

Several trips to other locations are planned before the run is concluded.