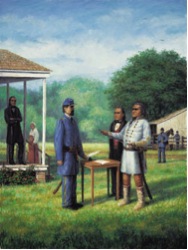 The OKPEX 2015 stamp show's theme honors the 150th Anniversary of the Surrender of Cherokee Confederate General Stand Watie with a cachet cover featuring a painting of the historic event from the Oklahoma State Senate art collection.

The following is a release from the Oklahoma City Stamp Club:

OKPEX hosts the France and Colonies Philatelic Society this year.  From 2:30-4:30 p.m. Friday, June 19, there will be two outstanding presentations by members of the Society; French Guinea by Steve Tucker and Tunisian Postage Due Stamps and Usage - The First Issue of Perforated "T" Coat of Arms Stamps by Norval Rasmussen. The Annual Meeting of the France and Colonies Society will be held at 10 a.m. on Saturday, June 20.

With competitive display of 2,000 collector pages, OKPEX is an American Philatelic Society World Series of Philately event.  The multi-frame Grand Award winner will qualify for the Champion of Champions exhibition at APS Stampshow Aug. 20-23, 2015, in Grand Rapids, Mich

The OKPEX bourse will comprise 17 dealers from 6 states and the United States Postal Service postique booth. Activities for young people will include a youth area with buckets of free stamps.

The Stamp Inheritance free evaluation booth will provide no obligation advice for those who want to learn about  the stamps they have inherited.