A fresh issue early in the season: Summer Harvest stamps 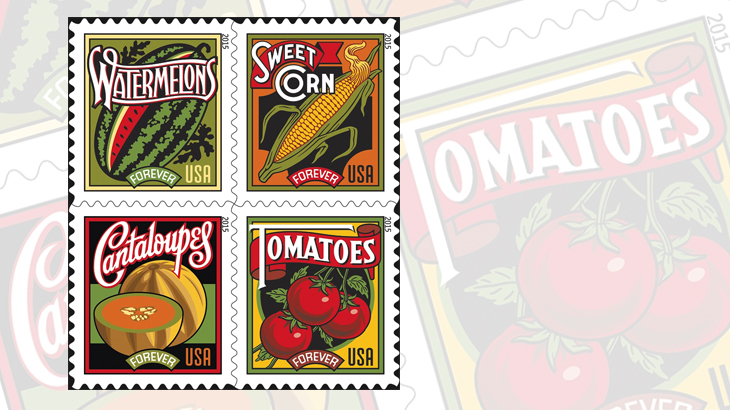 Farm-fresh fruits and vegetables are featured on four stamps that resemble vintage produce crate labels. The new forever stamps will be issued July 11. 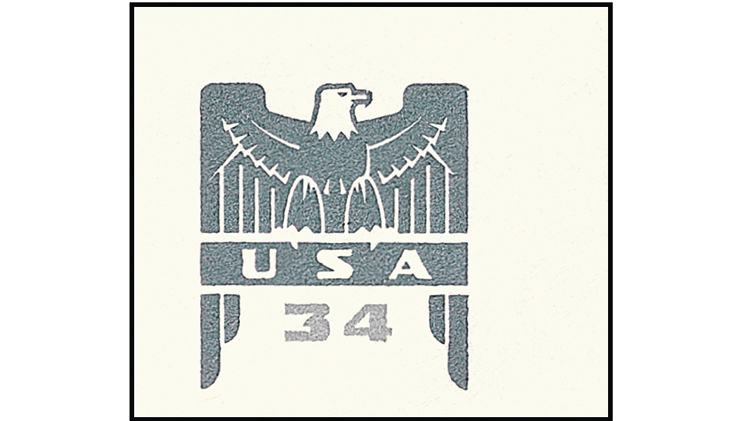 The 34¢ Federal Eagle stamped envelope design from 2001 was illustrated by Michael Doret. 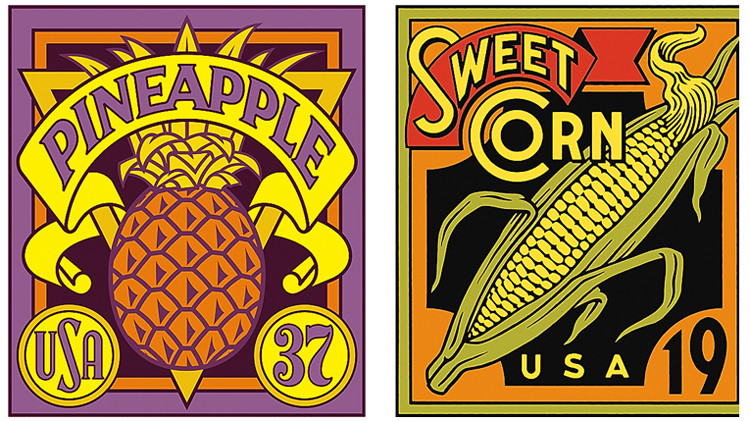 Two early designs developed by Michael Doret for the Summer Harvest stamp set. The pineapple illustration at left was set aside when the number of designs in the set was cut down to four. Elements of the early Sweet Corn stamp design are present on the st
Previous
Next

The stamps are being issued in a flat double-sided pane of 20 that the Postal Service identifies as a booklet.

A noon first-day ceremony will take place at the California State Fair, 1600 Exposition Blvd., in Sacramento.

Collectors intending to attend the ceremony will need to purchase a ticket to enter the fair. Ticket prices are $8 for youngsters age 12 and under, $10 for seniors age 62 and older, and $12 for general admission. Children age 4 and under are admitted free. Parking is $10.

To receive complimentary tickets, send an RSVP email by July 1 to Nationalevents@usps.gov.

The illustrations on the Summer Harvest stamps were created by Michael Doret, working with USPS art director Antonio Alcala.

With a solid color palette of red, black, green and yellow orange, each design shows the name of the produce subject in white lettering across the top, with the word “forever” in an arching banner along the bottom, and “USA” in the lower-right corner.

An early concept for these stamps was developed by former USPS art director Richard Sheaff.

Doret is a graphic artist and lettering designer whose work has appeared on album covers by the legendary rock group Kiss, magazine covers including Time and TV Guide, and as the logo for the New York Knicks professional basketball team.

On his Alphabet Soup blog, Doret explains that he was contacted by Sheaff back in 2002 to create designs for a set of stamps celebrating American fruits and vegetables.

The stamp set was to contain six designs, with avocado, grapes, pineapple, strawberries and other fresh crops among the candidates.

“We decided that as a point of departure I would reference vintage seed packets, catalogs and fruit crate labels,” Doret wrote.

On his blog, Doret shows a selection of the illustrated items he reviewed.

“I was not trying so much to do faithful renditions of seed packets or fruit crate labels,” he added, “but to create graphics that might be seen as contemporary versions of their earlier cousins.”

Doret’s designs in various states of completion remained unused for a decade before he was contacted again, this time by Alcala, for another U.S. stamp project.

The artist brought up the subject of the unused Summer Harvest designs, and work on that project resumed — but with significant changes to the original subjects and illustrations.

The full story, accompanied by Doret’s beautiful artwork and working sketches illustrating the design process, can be found on Doret’s blog.

His only other illustration for the Postal Service to date has been the 34¢ Federal Eagle stamped envelope issued Jan. 7, 2001 (Scott U646). The design for that product was originally intended for use on variable-rate coil stamps, but it was shelved when variable-rate stamps evolved in a new direction, and was revived when then-USPS stamp development manager Terrence McCaffrey came across the preliminary designs and proposed their use for a new stamped envelope.

Doret also created typography for two 32¢ stamps in 1995: the Florida Statehood stamp (Scott 2950) and the Texas Statehood stamp (2968), both of which were designed and illustrated by Doret’s wife, Laura Smith.

The Postal Service is offering its standard two varieties of uncut press sheets of the Summer Harvest forever stamps: either with or without the die cuts that normally separate individual stamps. The cost is $78.40 for either sheet containing eight panes (160 stamps).

First-day covers sold by the Postal Service are canceled with a pictorial design resembling a horizontal farm sign that reads “Summer Harvest,” either in black, or in multicolor on USPS envelopes with no printed cachet.

Collectors preparing their own FDCs can process their requests using the information in the technical details for the Summer Harvest forever stamps that are presented here:

Standard ordering instructions apply. Collectors requesting first-day cancels are encouraged to purchase their own stamps and affix them to envelopes. The first-day cover envelopes should be addressed for return (a removable label may be used), and mailed in a larger envelope addressed to Summer Harvest Stamps, Customer Relations Coordinator, 2000 Royal Oaks Drive, Sacramento, CA 95813-9998. Requests for first-day cancels must be postmarked by Sept. 9.

The Postal Service’s uncacheted first-day cover set of four for the Summer Harvest stamps is item No. 690016 at $3.72. USPS order numbers for stamps and FDCs also appear in Linn’s 2015 U.S. Stamp Program.