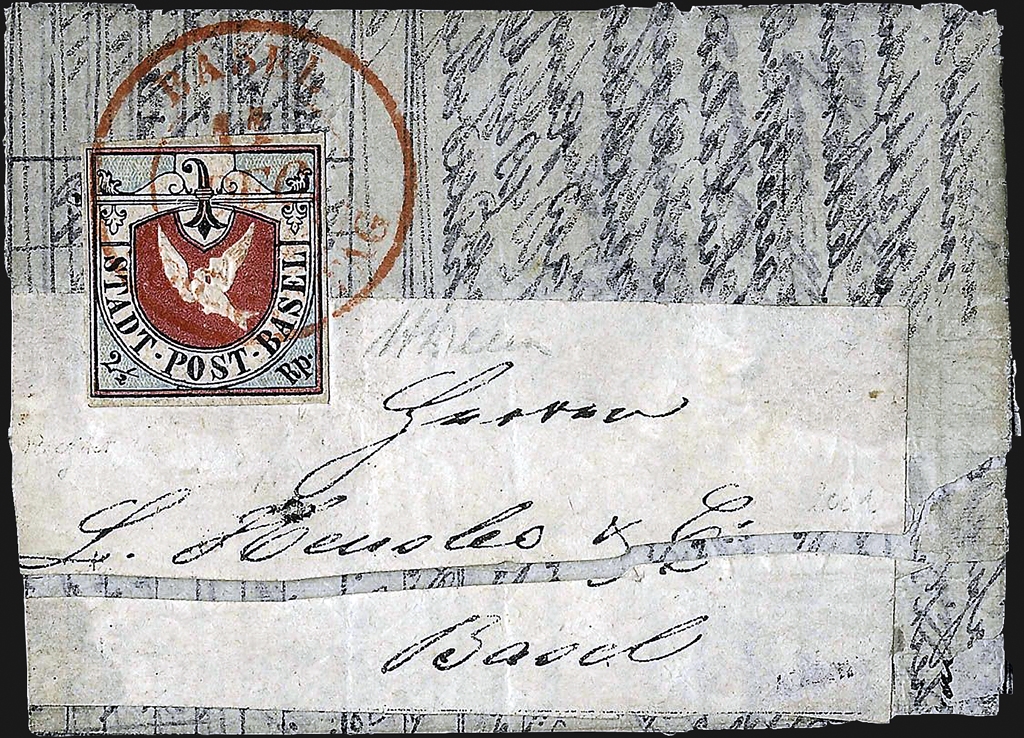 A folded letter bearing the 1845 Swiss Basel Dove stamp was the featured item at the May 19 Robert A. Siegel sale of the Richard C. Frajola collection of worldwide classic covers.

The Richard C. Frajola collection of worldwide classic covers from philately’s earliest years was sold by Robert A. Siegel Auction Galleries in New York on May 19. The sale was previewed in the May 18 issue of Linn’s.

As anticipated, the top lot was a lovely folded newsletter bearing a prime example of the famous Basel Dove, the 1845 Swiss local issue (Scott 3L1) exquisitely printed in three colors. Considered outstanding in all respects, the cover sold for $25,300 including the 15 percent buyer’s premium added by Siegel to all lots.

A locally addressed cover from the Australian colony of New South Wales bore a 1-penny Sydney View stamp of 1850 with a printing-plate anomaly known as the “no clouds” variety (Scott 2k). The cover, a pink circular enhanced by a fancy boxed “6 O’Clock” handstamp, was described as “the only nice one” in existence with that stamp. It sold for $14,950.

An 1844 Brazil cover franked with a 60-reis Bull’s Eye stamp (Scott 2) from the early state of the printing plate was notable for having the stamp on the front, rather than the back as is more common, and tied by a scarce straight-line town postmark that was a holdover from the pre-stamp period. It sold for $13,225.

An 1859 Buenos Aires 1-peso blue “barquito” on cover, described as “in much better quality than typically found,” sold for $3,105, while a Great Britain 2-penny stamped envelope of 1841, with a Maltese cross cancel and neat Exeter circular datestamp, fetched $1,380. The latter is said to be notably scarcer than the 2p Mulready envelope.