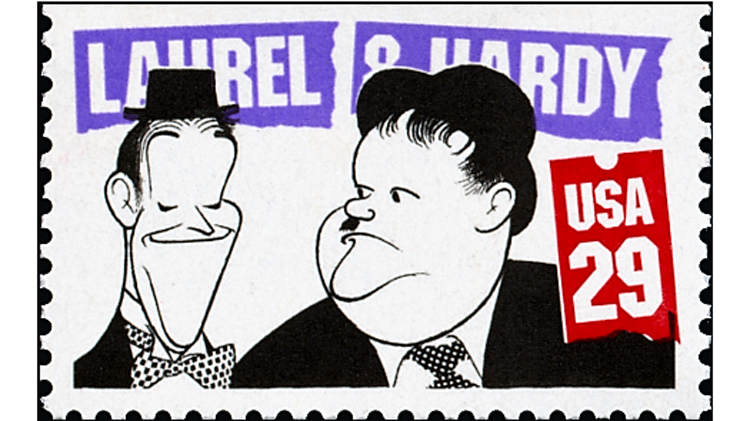 Comic actor, writer and film director Stan Laurel was born Stanley Arthur Jefferson in Ulverston, England, on June 16, 1890. He is featured at left on a 1991 29¢ stamp commemorating the comedy team Laurel and Hardy (Scott 2562).

Laurel’s partner for 30 years was actor Oliver Hardy, who was born in Georgia.

Laurel began as a bit player in a British comedy troupe that also included Charlie Chaplin, who was a year older than Laurel. The group traveled to the United States in 1910, and Laurel settled in Hollywood, where he found work in comedy films.

In 1921 he had a role in the silent film The Lucky Dog, which also featured Hardy. Their first film together led to a team up a few years later, and a successful series of movies produced by Hal Roach studios, MGM and 20th Century Fox.

Slipping Wives in 1927 was one of their first together, followed by The Battle of the Century that same year.

As a team they appeared in 107 films, including 23 full-length features. Laurel often wrote, directed and edited their films, while Hardy was less directly involved with the production.