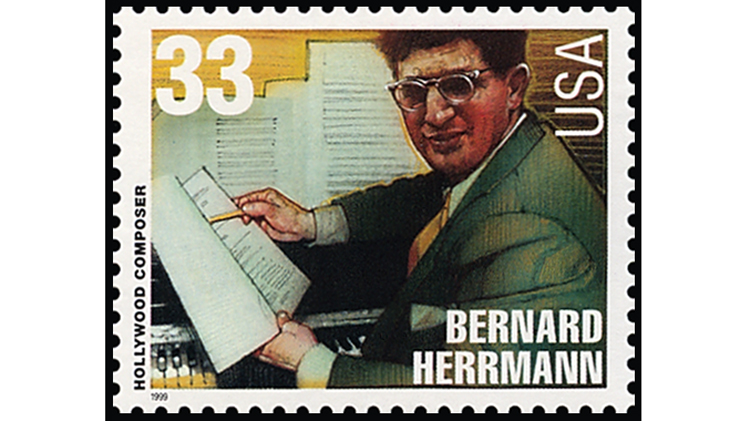 Composer Bernard Herrmann, born in New York City on June 29, 1911, was a favorite of film directors Orson Welles and Alfred Hitchcock, among others.

Herrmann studied at New York University and the Julliard School of Music. After working for CBS as a composer and conductor, Herrmann scored his first film, Welles’ Citizen Kane (1941).

The following year Herrmann was again hired by Welles for the film The Magnificent Ambersons, and in 1944 he scored Welles’ production of Jane Eyre, directed by Robert Stevenson.

Herrmann’s music was a compelling element in several Hitchcock films including Vertigo (1958), North By Northwest (1959), and the classic Psycho (1960).

Five of Herrmann’s scores were nominated for Oscars. His only win was for The Devil and Daniel Webster (1941), which competed against his nominated score for Citizen Kane.

Herrmann also composed music for television, including the famous themes for the series Perry Mason and The Twilight Zone.

A set of six 33¢ stamps issued Sept. 16, 1999, in the Legends of American Music commemorative series honored Hollywood composers, including one stamp for Bernard Herrmann (Scott 3341).