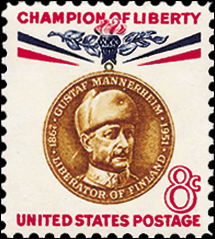 Baron Carl Gustaf Emil Mannerheim was born into a Finnish family of nobility at the Louhisaari Manor in Askainen, Finland, on June 4, 1867. The village is in the country's southwestern Varsinais-Suomi region.

Mannerheim is widely recognized as the father of modern independent Finland. When the stamps were issued, U.S. Postmaster General Arthur Summerfield was quoted as saying, "Marshal Mannerheim led the Finnish armed forces in his country's struggle for independence in 1918, during the Winter War of 1939-40, and again during the Continuation War of World War II. He was called on twice during his long and distinguished career, in 1918 and again in 1944, to head a new government and direct the rebuilding of his country."

Mannerheim was named the nation's president in 1944, but resigned just two years later, citing ill health. He died in 1951.

The Champions of Liberty series honored prominent individuals and leaders of nations worldwide, including Simon Bolivar, Ignacy Jan Paderewski and Mahatma Gandhi. In the first-day ceremony remarks for the 1960 Mannerheim stamps, Special Assistant to the Postmaster General L. Rohe Walter said, "Although these great benefactors of humanity lived in many different lands and times, their lives were always dedicated to the militant leadership in mankind’s eternal struggle for justice."