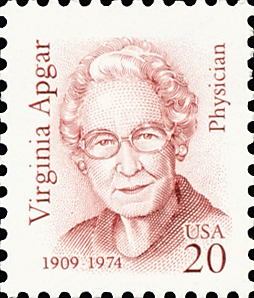 Dr. Virginia Apgar, who was born in Westfield, N.J., on June 7, 1909, developed the Apgar score, a method to quickly assess the physical condition of a newborn baby.

As an anesthesiologist with Columbia University, Apgar proposed her method before a joint meeting of the International Anesthesia Research Society and the International College of Anesthetists in 1952, and published it the following year.

Apgar graduated from Mount Holyoke College in 1929 and received her medical degree four years later from the Columbia University College of Physicians and Surgeons.

She was appointed clinical director of the division of anesthesiology at Presbyterian Hospital in 1938, and later was named a full professor at Columbia.

Her popular book Is My Baby All Right?, co-written with Joan Beck, was published in 1972.