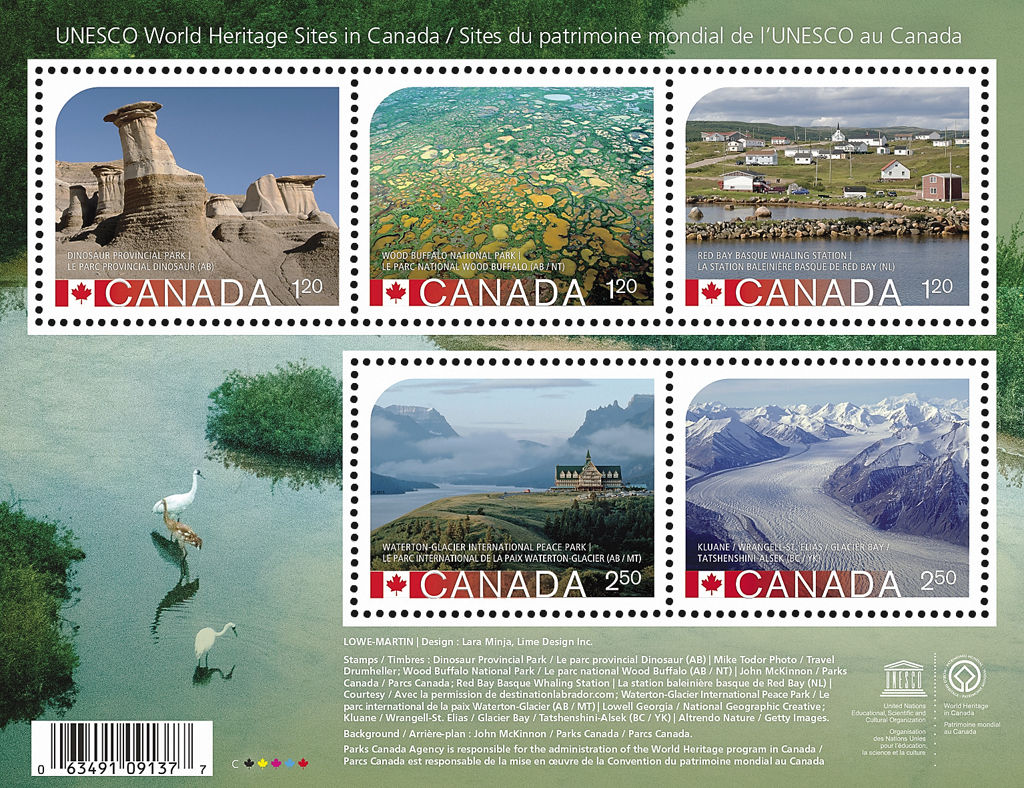 Unlike the die-cut self-adhesive booklet versions of Canada’s five new UNESCO World Heritage Sites stamps shown previously, the stamps included in the souvenir sheet are clearly perforated in an image provided by Canada Post. Only 140,000 of the souvenir 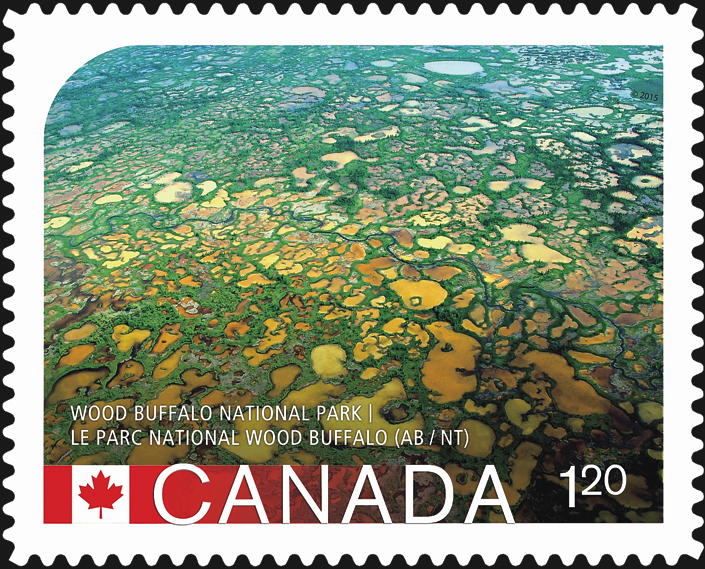 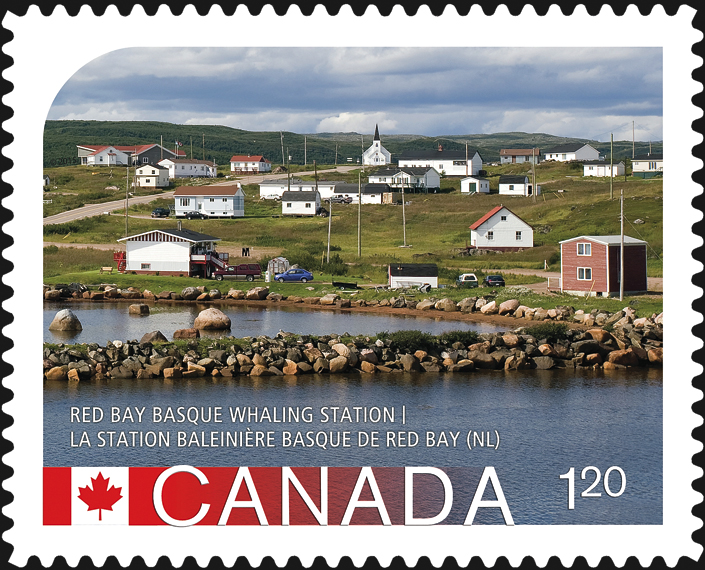 Also paying Canada’s $1.20 letter rate to the United States is this stamp showing the Red Bay Basque Whaling Station, located on the southeastern coast of Labrador since the 1530s. 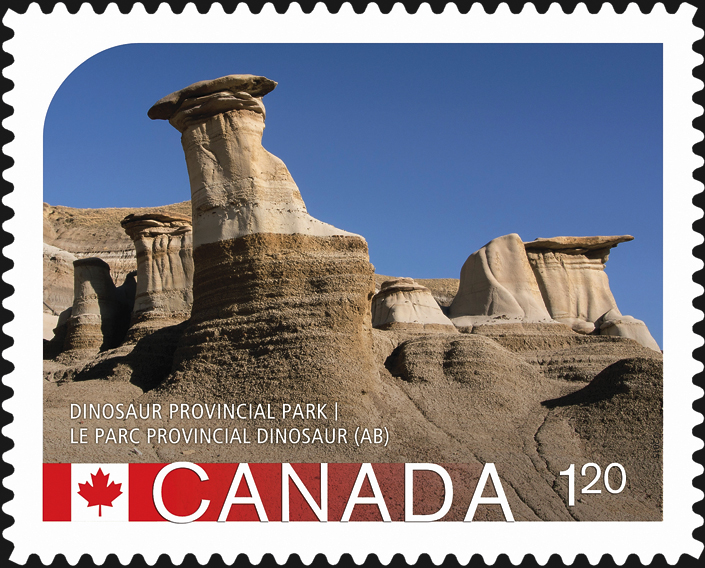 Hoodoos — weird-looking columns of rock naturally weathered by wind and water — are pictured on this $1.20 stamp depicting part of southeastern Alberta’s Dinosaur Provincial Park, where more than 40 species of thunder-lizards have been discovered. 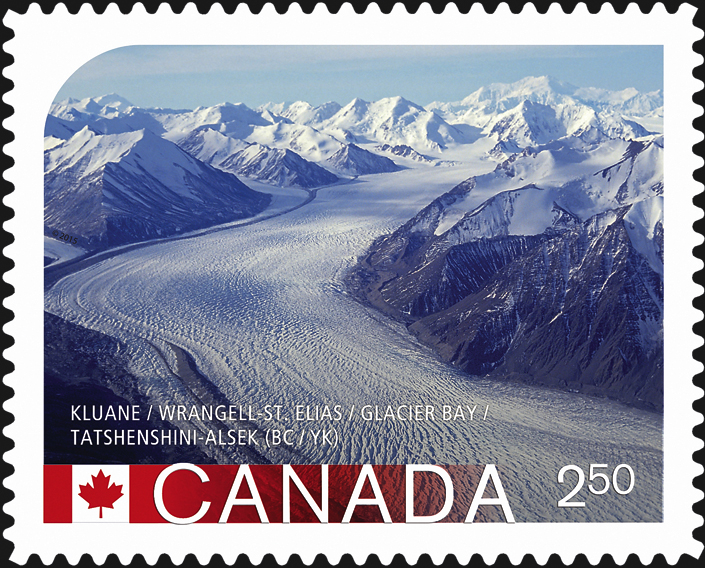 A second $2.50 stamp honors the Waterton-Glacier International Peace Park in northern Montana and southern Alberta, and depicts the Prince of Wales Hotel, built by a U.S. railway magnate on land leased from Canada. 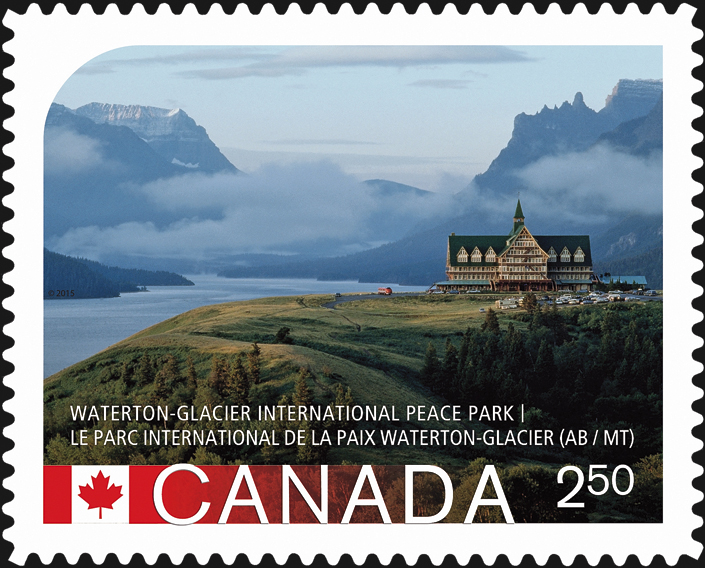 A second $2.50 stamp honors the Waterton-Glacier International Peace Park in northern Montana and southern Alberta, and depicts the Prince of Wales Hotel, built by a U.S. railway magnate on land leased from Canada.
Previous
Next

The stamps celebrate places listed by the United Nations Educational, Scientific and Cultural Organization as being of exceptional cultural or physical significance.

Canada Post says the UNESCO Heritage Site series will continue with a fourth issue of “permanent” (85¢) domestic-rate commemoratives later this year, “in response to many requests we’ve received over the years for stamps that depict the natural and cultural beauty of our country.”

A $2.50 international-rate stamp in the July 3 issue pictures a massive glacier in the first transborder site ever named by UNESCO, which straddles a rugged and remote region of Alaska, Yukon Territory and British Columbia.

Home to most of the tallest peaks in North America and the largest ice field outside of the polar caps, Kluane National Park and Reserve and Tatshenshini-Alsek Park are the Canadian components of a vast, unbroken ecological unit that covers 37,450 square miles — an area larger than Indiana — yet a region so challenging that the only human interaction with the land is “an historic Aboriginal presence.”

A second $2.50 stamp shows a scenic corner of the Waterton-Glacier International Peace Park, the first of its kind in the world to promote peace and friendship between nations.

The idea to unite Montana’s Glacier National Park and Alberta’s Waterton Lakes National Park began as early as 1911 when, according to Parks Canada, “Waterton’s first park official, John G. ‘Kootenai’ Brown, forged a friendship with Henry ‘Death on the Trail’ Reynolds, an American Ranger from Goat Haunt, MT … Both men felt that the upper Waterton valley, which is intersected by the Canada/US border, could not and should not be divided.”

In 1932, the parks combined as the Waterton-Glacier International Peace Park.

An international herd of elk migrates annually between a summer mountain habitat in Glacier and winter prairie ranges in Waterton. An aboriginal presence dates back at least 12,000 years, and in both parks remain places that hold deep significance for First Nations peoples.

In fact, Waterton-Glacier International Peace Park stands on the land of three nations: Canada, the United States and the Blackfoot Confederacy.

Panes of six, three each of these $2.50 stamps celebrating Canada-U.S. parks issued July 3,  should be of interest to Canadian and American collectors alike.

Ironically, because the stamps pay Canada’s international mail rate — more than twice the $1.20 rate for a letter from Canada to the United States — few are likely to ever be used on mail between the two nations.

One otherworldly design depicts the columns of naturally weathered rock known as hoodoos of Dinosaur Provincial Park, in the badlands of southeastern Alberta.

Since the 1880s, the park has seen the discovery of 300 fossils of more than 40 dinosaur species dating as far back as 75 million years.

The retreat of the last ice age about 13,000 years ago created the Red Deer River Valley, along with the hoodoos, isolated mesas and low-lying coulees of the badlands. It also left the Earth’s greatest concentration of rare Late Cretaceous fossils, concentrated in a 17-mile stretch along the river — remains now showcased in museums around the world.

Canada’s largest national park, Wood Buffalo National Park, is the embodiment of northern Canada. Its 17,300 square miles encompass boreal forest and plains and some of the largest undisturbed grass and sedge meadows left in North America.

These meadows sustain the world’s largest free-roaming herd of bison, the nesting habitat of the world’s last remaining wild migratory flock of whooping cranes, and some nesting sites of the peregrine falcon.

In 2013, UNESCO chose Red Bay Basque Whaling Station as the newest site on its World Heritage List. In the 16th century, whalers from France and Spain came to the coast of Labrador near the northern tip of Newfoundland to hunt the right and bowhead whales then plentiful in those waters, which supported a thriving whale oil industry.

The horizontally formatted stamps measure 54 millimeters by 85mm, have PVA gum, and were printed in four-color offset lithography by Lowe Martin.

Two examples each of three different $1.20 stamps paying the basic Canadian letter rate to the United States appear in a $7.20 booklet of six, Canada Post item 413982111.

In the image of the souvenir sheet supplied by Canada Post shown nearby, these stamps appear to be perforated, presumably with moisture-activated gum.

The FDCs are canceled at Red Bay, Newfoundland, site of the Red Bay Basque Whaling Station, which dates back to the 1530s.

Canada Post also is offering international-rate picture postal cards of all five of the stamp designs for $2.50 each, or they may be purchased at $12.50 for a set of five as Canada Post item 262437.

Canada Post products are available at its online store. Stamps and FDCs will be available by mail order from the National Philatelic Centre, Canada Post Corp., 75 St. Ninian St., Antigonish, NS B2G 2R8, Canada; or by telephone from the United States and Canada at 800-565-4362, and from other countries at 902-863-6550.