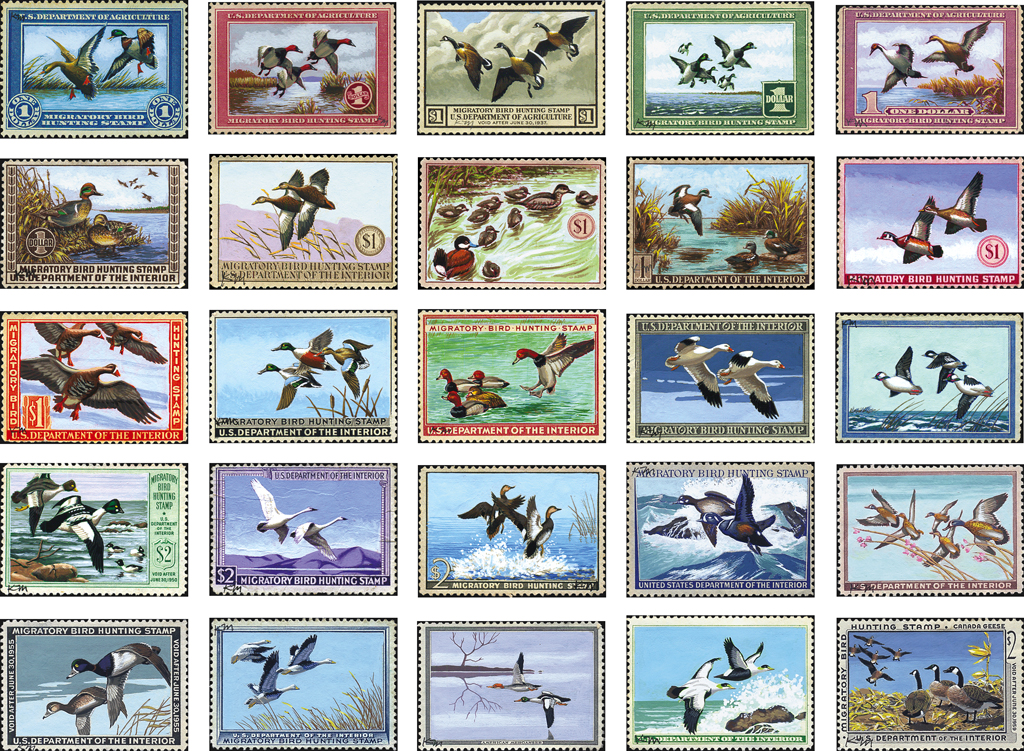 Ken Michaelsen,the artist for the 1978 California duck stamp, colorized the first 25 federal duck stamps at the request of a collector. 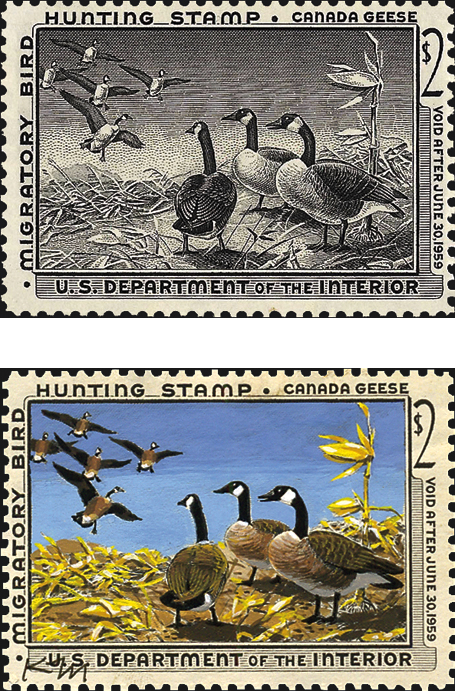 The first 25 federal duck stamps were printed in a single color. The last of these, from 1958, is shown on the left with a recently colorized version on the right.
Previous
Next

Do you recall the first time you saw the film The Wizard of Oz? That moment when Dorothy opened the door of the cottage into Munchkin Land in all its Technicolor glory?

A similar event has occurred in United States federal duck stamps, thanks to the creative thinking of a Wisconsin collector.

Wishing to add a little something extra to his collection, what if, he wondered, a set of the first 25 federal duck stamps (Scott RW1-RW25) could be enhanced from their mono-color printing?

The collector contacted us (Bob and Rita Dumaine of Sam Houston Duck Co.) to learn if anything like this had been done before. We referenced the story of the 1978 California state duck stamp  by Ken Michaelsen, which was not printed in full color as intended.

Over the years, Michaelsen has taken some of these stamps and added color to them. For more details, see Bob Dumaine’s Duck Stamps column in Linn’s Stamp News, April 2, 2001.

After the collector saw the before-and-after photographs of the 1978 California duck stamp, he enthusiastically inquired if Michaelsen would attempt the same on the set of monochrome federal duck stamps.

The artist agreed to give it a try. The process was laborious and took about two months to complete, but the end result was worth the wait.

The collector received his package in the mail, and knowing what was inside, he opened it with trembling fingers. Would it be terrific or a disaster?

As he gazed at the stamps for the first time, he was awestruck by their beauty.

Jim Hautman, a four-time federal duck stamp contest winner, commented on the project: “Interesting idea and I enjoyed looking through them. It makes you realize how many different ways there are to do it. Ken (Michaelsen) did nice job. It would be fun to see multiple versions by different artists, too (no, I’m not volunteering). I’m sure the original artist would say, ‘I wouldn’t have done it that way,’ but maybe that’s what makes it an interesting experiment.”

Ron Jenkins, who created the artwork for the 1965 federal duck stamp, is well-known for his stamp remarques, especially his ability to add additional ducks to the scene.

In an article in the February 2001 issue of Scott Stamp Monthly, Bob Dumaine provides the following definition of a remarque (pronounced re-mark) from Wildlife Art News: “A small original drawing made by an artist in the margin of a print. Originally, remarques were used to identify certain stages in the plate preparation process, but now represent a means for the artist to personalize prints.”

Of the colorized ducks, Jenkins commented: “Nice idea. What is really good is Ken’s work (his colors are very nice) and precision in staying within the design. My wife used to say, ‘You artists never could stay inside the lines,’ but in this case it’s not warranted. Really nice work … and the colors seem to fit. They’re just right.”

While it might not be for everyone (remember the anger directed at Ted Turner when he colorized old films), the man who dreamed up the idea is thrilled with his one-of-a-kind duck stamp collection.