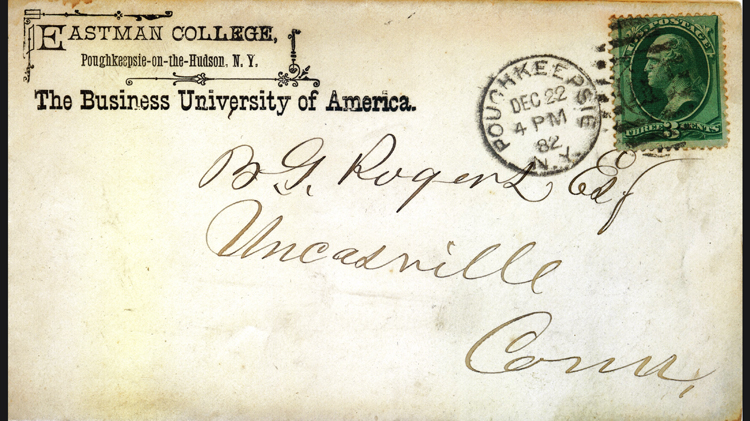 A rather plain corner card is shown on this 1882 cover from the Eastman Business College. The cover is franked with a 3¢ green George Washington stamp. 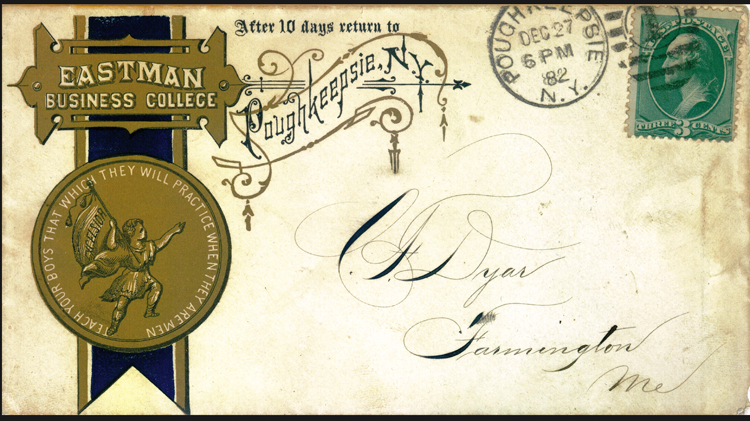 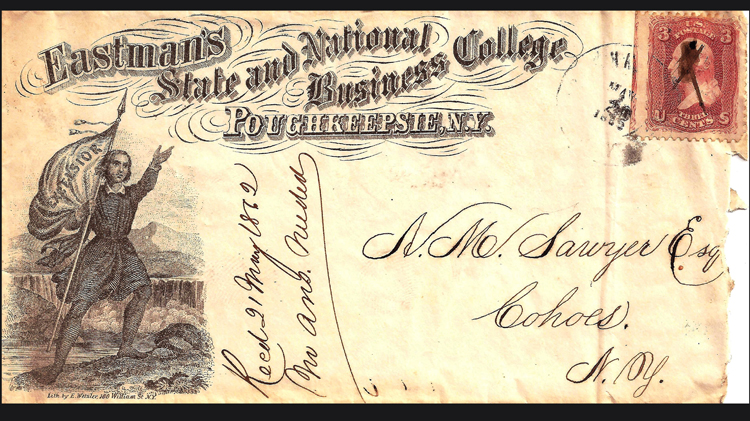 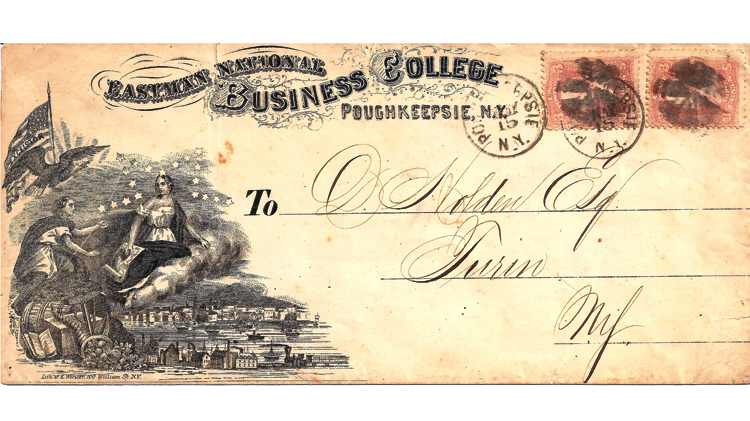 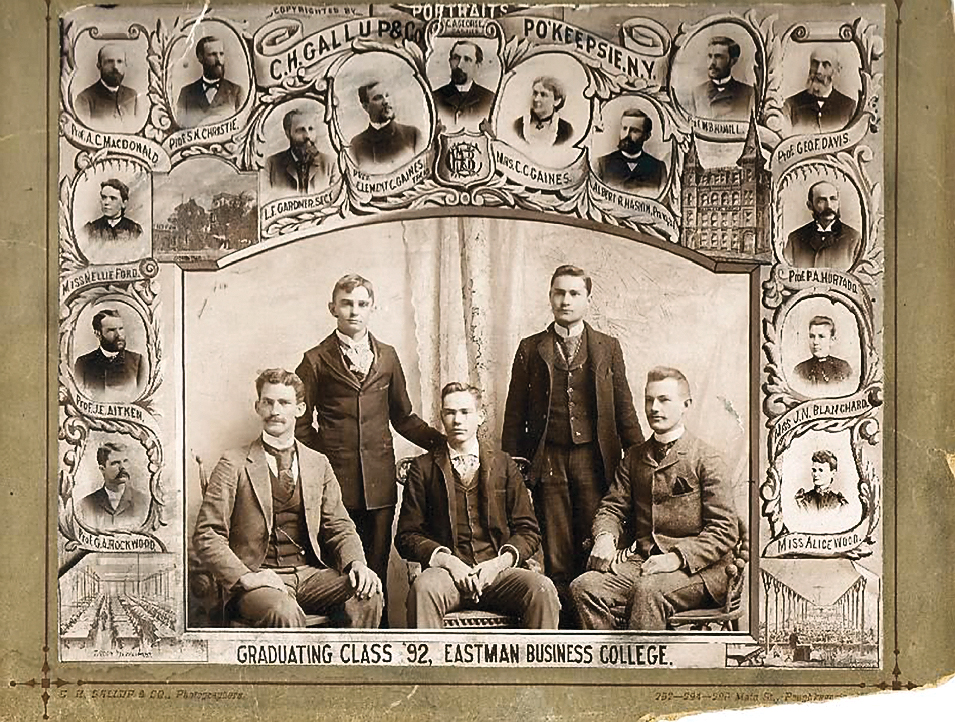 The 1892 graduating class of the Eastman Business College. 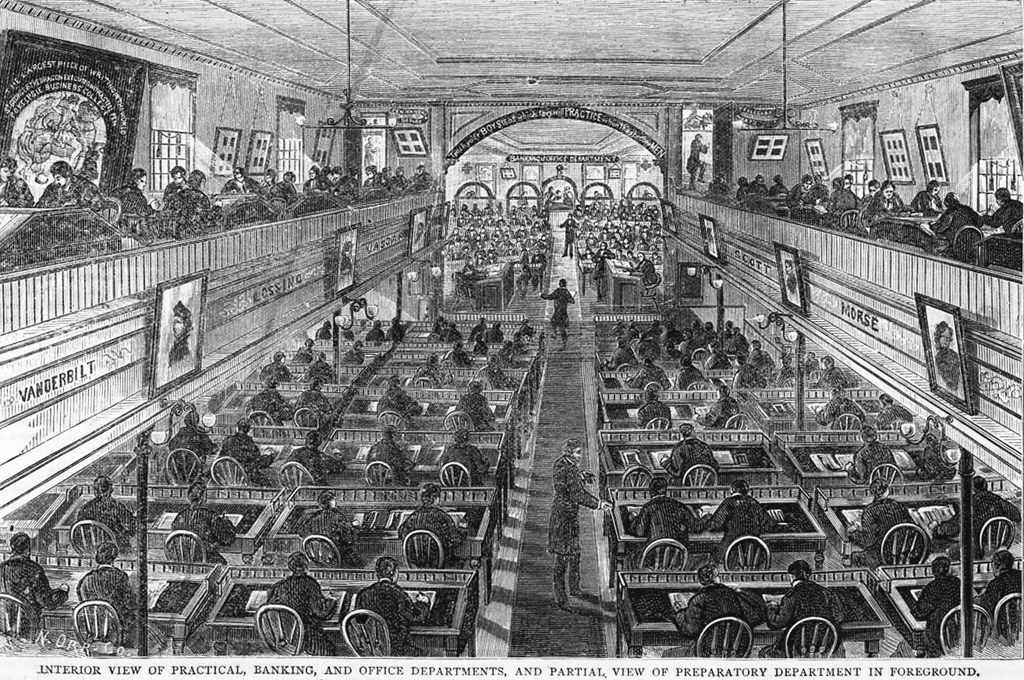 View of the practical, banking and office departments of the business college. 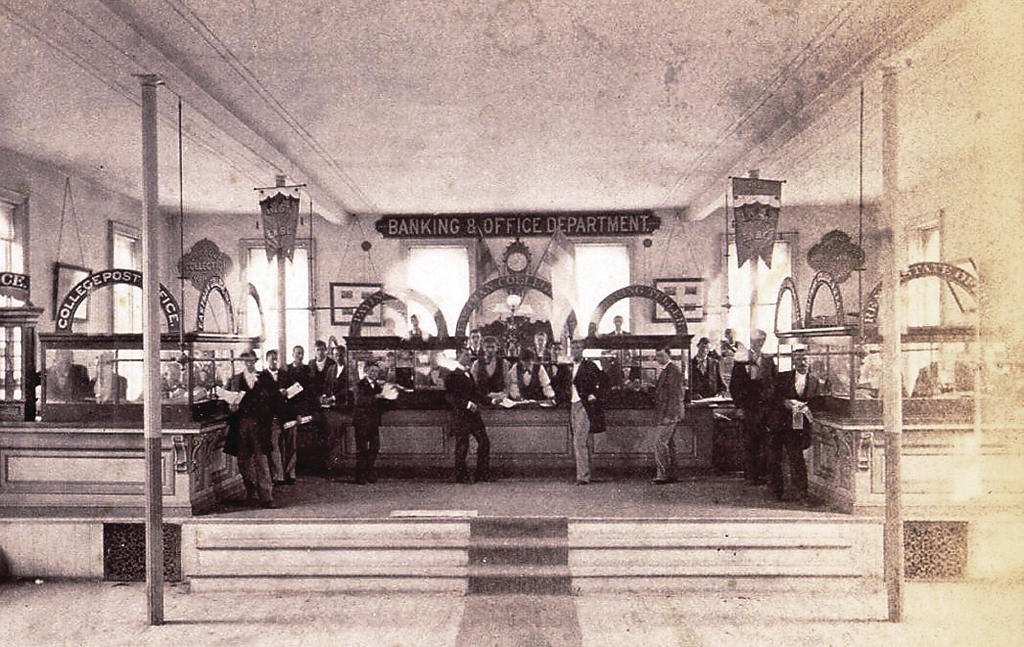 The banking and office department with the college post office at left. 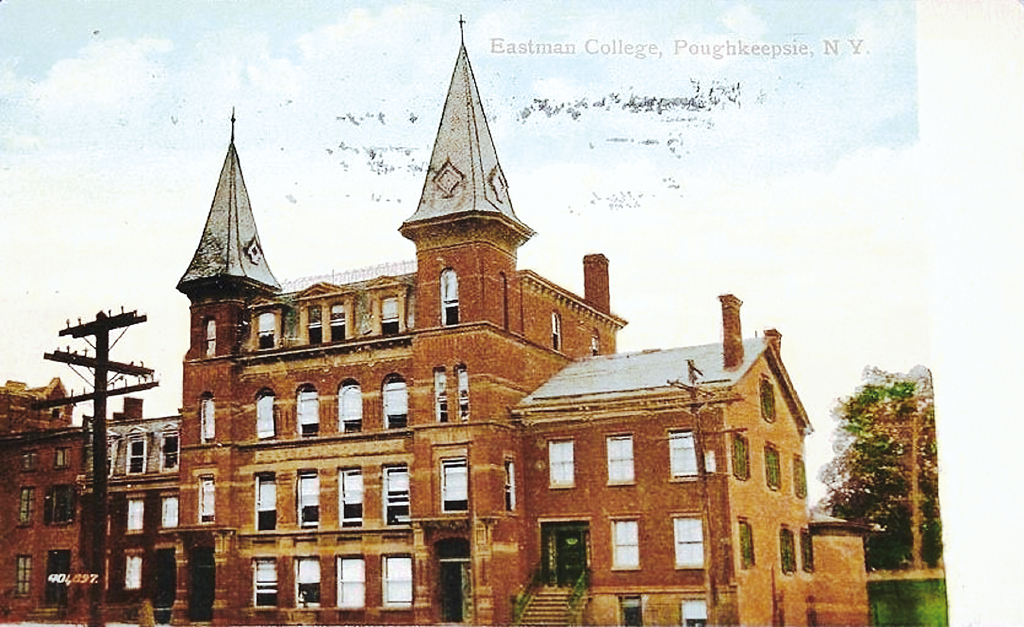 The main building of the Eastman Business College on Washington Street in Poughkeepsie, N.Y. The school was founded Nov. 3, 1859. 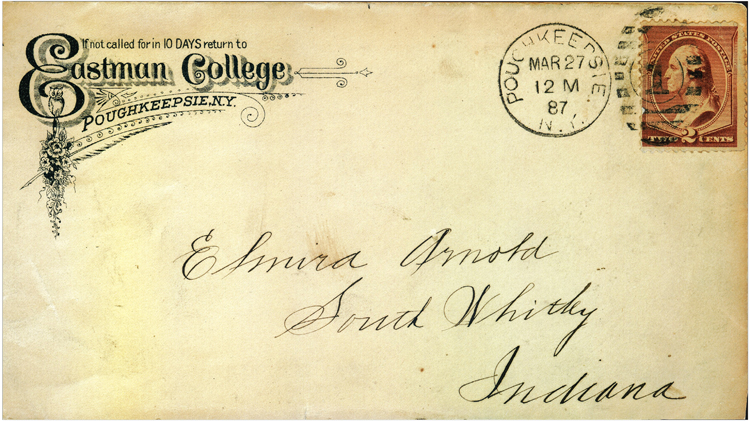 This 1887 Eastman Business College cover addressed to South Whitley, Ind., features a corner card that is slightly more ornate, with decorative scrolls, an owl, a bouquet of flowers and a quill pen. 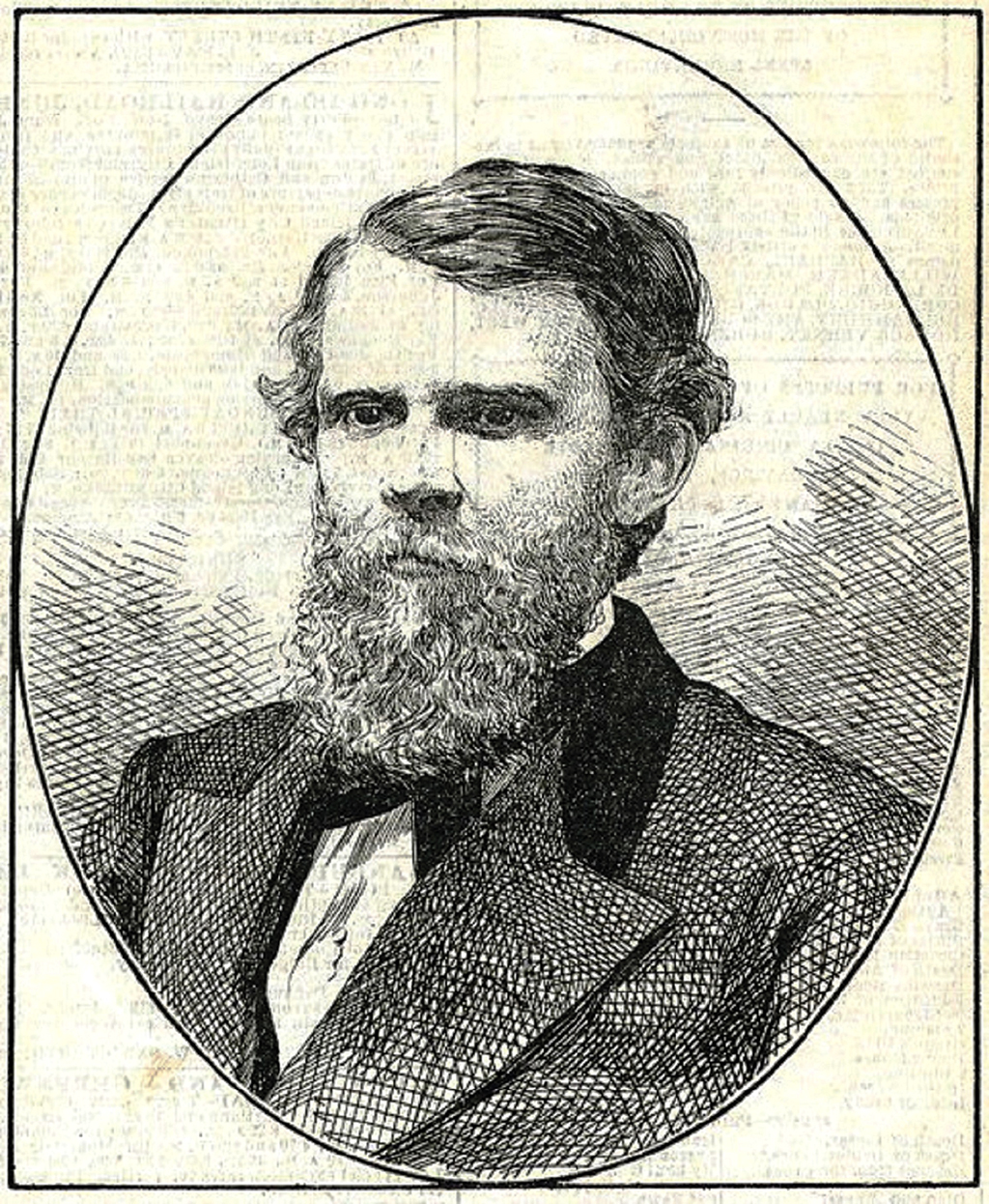 It wouldn’t be too difficult to make the case that 19th-century advertising covers are among the most eye-catching items available that you can add to your collection.

Advertising covers were born as a natural extension of circular advertising mail during an era when ornate and colorful printing methods were becoming de rigueur.

Businesses large and small added all sorts of what surely can be considered miniature works of art to their envelopes as a means of getting the word out.

As collectors, we especially seek out ad covers when they emanate from a single entity, partly in the name of completeness but particularly as a means of tracing the evolution of the envelope ad art our chosen source used. Often times we select a local or nearby source, akin to collecting our hometown postal history.

Let’s explore one such entity from my locality, the Eastman Business College of Poughkeepsie, N.Y.

Some background: in the mid-1800s, as the Industrial Revolution was transitioning to the Technological Revolution, the demand for office workers was increasing exponentially. Businesses were expanding, and to be able to continue doing so, they needed a steady supply of well-trained office staff who could step right in and go to work. Business schools started popping up all around the country to meet this demand.

Harvey Gridley Eastman (Oct. 16, 1832-July 13, 1878) started out as an instructor at his uncle’s Rochester, N.Y., business school, the Eastman Commercial College. Having learned the ropes, Harvey set out on his own, first opening a school in Oswego, N.Y., and then one in St. Louis, Mo. Both, for various reasons, failed to prosper. Eventually settling in Poughkeepsie, Eastman founded the Eastman Business College on Washington Street Nov. 3, 1859.

Beginning with just one recruit, the college quickly grew to 1,600 students, while employing 60 instructors and occupying five large buildings. Eastman was elected to the New York State Assembly and served two terms as the mayor of Poughkeepsie, which cemented the success of his college. It became one of the largest commercial schools in the country.

Items produced by Eastman college are a collector’s dream. One big reason for its success was that unlike many other schools from this era that relied strictly on classroom teaching, Eastman stressed hands-on training.

As a result, ephemera abounds with many business-related items available on the market including practice checks and receipts used by the students.

Cinderella stamp collectors can enjoy the dummy stamps produced by the college, while postcard collectors and photograph collectors can find many views of the school in both colored and black-and-white postcards and pictures.

But the ephemera of the greatest interest to most collectors are the advertising covers. The most ornate covers were produced by lithography in the Ernest Wetzler studio on William Street in New York City. Produced during the Civil War, they exhibit a patriotic New York flair, including the state motto “Excelsior.” The motto is Latin meaning “ever upward,” a motto most likely also used to rally the students to their studies.

Shown is a double-rated cover mailed to Turin, N.Y., bearing two 1861 3¢ rose George Washington stamps (Scott 65). One of the stamps is tied by two strikes of a Poughkeepsie, N.Y., postmark dated May 15. Part of the illustration on the cover shows a great view of boats on the Hudson River at Poughkeepsie, with a train drawn by a steam locomotive chugging past.

Another cover features an “Eastman’s State and National Business College” logo. This cover, mailed to Cohoes, N.Y., in 1862, bears a 3¢ George Washington stamp pen-canceled with a blurry “X.” This time the motto “Excelsior” appears on a banner borne by a young man. The waterfalls in the background are presumably Niagara Falls. Looking at this illustration, I can almost hear the rumble of the falls.

Art nouveau was the dominant style from about 1890 to 1910. One of the covers shown demonstrates how Eastman college adopted this style for its advertising covers. This 1882 cover, franked with a 3¢ green George Washington Bank Note stamp, was mailed to Farmington, Maine.

The advertising illustration sports a gold medallion and both the New York state motto and the Eastman college motto: “Teach Your Boys That Which They Will Practice When They Are Men.”

Another 1882 advertising cover with a much simpler corner card is franked with a single 3¢ green George Washington stamp. It was mailed to Uncasville, Conn.

Another cover demonstrates the national reach of the business college. This 1887 cover is addressed to South Whitley, Ind. In addition to decorative scrolls, the corner card features an owl, a bouquet of flowers and a quill pen.

After training perhaps tens of thousands of students, the Eastman Business College closed its doors for good in June 1931.