From 1935-41, Honolulu-to-mainland supplementary mail was unusual 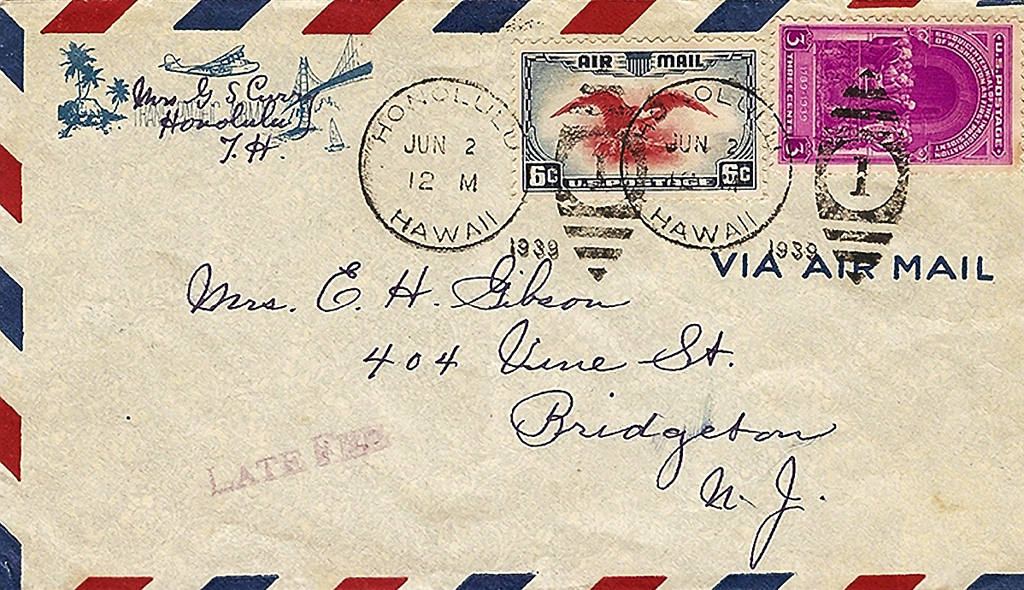 This June 2, 1939, airmail letter was mailed from Honolulu after the regular mails had closed, receiving the “Late Fee” supplementary mail marking but not the standard double-surface postage for the service. The 3¢ regular stamp (Scott 854) and 6¢ airmail

As the author pointed out in the book’s cover information: “United States Supplementary Mail began as a series of articles published in The United States Specialist from March 2007 through June 2008. The information presented in that series was almost entirely unknown in the philatelic world.”

Even now, many of us, including myself, are woefully ignorant of the supplementary mail process and continue to rely heavily on this great resource book.

The supplementary mail process in Piszkiewicz’s book is described as the means by which a person, from U.S. ports, for a fee of double the standard postage, could dispatch mail after the regular mails had closed. The phrase “late fee” is occasionally used instead of “supplementary mail” for this process.

The sole exception to this rule was Honolulu, 1935-41, where outgoing mail was accepted at shipside by outgoing ships in a practice dating to the days of the Kingdom of Hawaii in the mid-19th century.

Honolulu did not come into conformity with the double-postage requirement for late shipside mail until 1935.

On all of the post-1935 supplementary mail Honolulu covers, we find a “Late Fee” handstamp instead of a “Supplementary Mail” marking.

An interesting example of such an item, owned by Tom Breske, is illustrated here. This June 2, 1939, airmail letter was mailed from Honolulu after the regular mails had closed. Note the type LFH-2 “Late Fee” marking.

As is typical of these covers, it is franked for supplementary service from shipside in Honolulu with the 3¢ Washington Taking Oath of Office stamp (Scott 854), and for surface service to the U.S. mainland and transcontinental airmail service on the U.S. mainland with the 6¢ Eagle Holding Shield, Olive Branch and Arrows airmail stamp (C23).

As Piszkiewicz points out in his book, all known examples of supplementary mail Honolulu covers are franked in similar manner, confirming the correctness of this 1939 franking.

Tony Wawrukiewicz and Henry Beecher are the co-authors of two useful books on U.S. domestic and international postage rates since 1872. The third edition of the domestic book is available from the American Philatelic Society, while the international book may be ordered here.