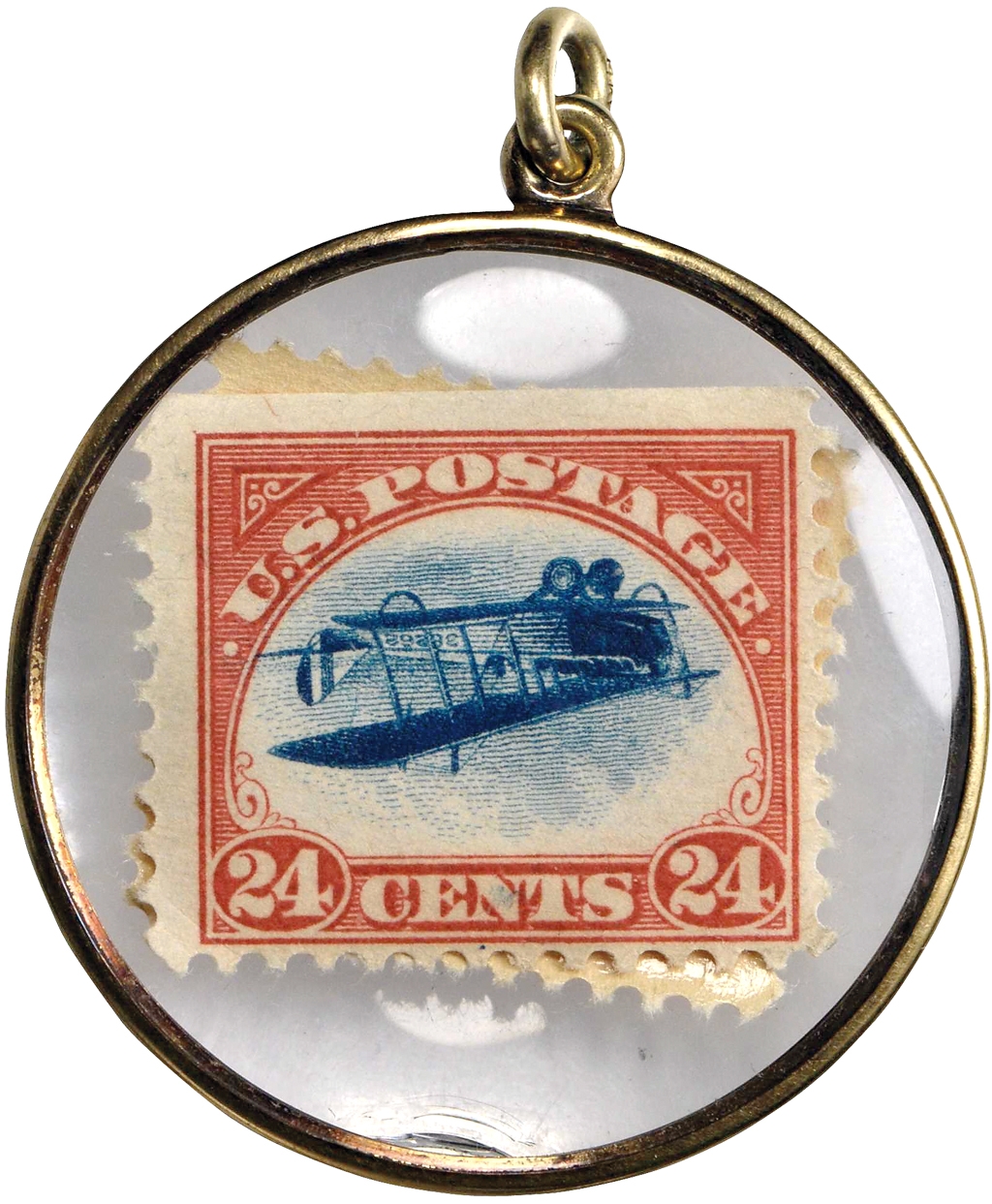 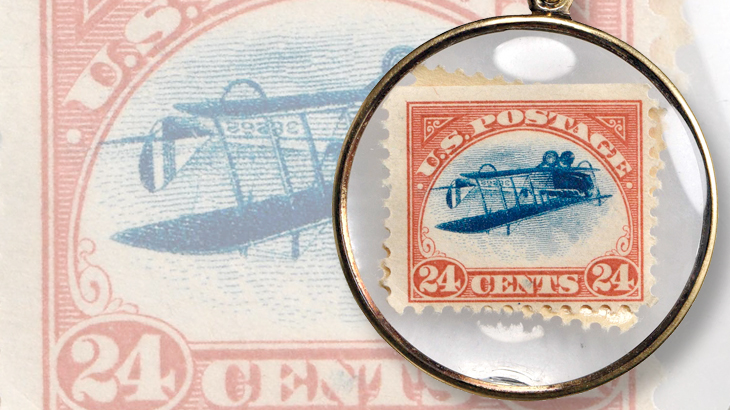 The famed Locket Copy of the Inverted Jenny, the United States 24¢ airmail stamp of 1918 with the biplane in the center printed upside down in error, was sold in New York on May 20 by Stack’s Bowers Galleries in association with Sotheby’s.

Although this was the fourth time the Locket Copy had appeared at auction, this marked the first time it was hammered down successfully (a 2014 report in Linn’s incorrectly stated that the stamp sold). The stamp had changed hands privately twice since 2003.

Perhaps not surprisingly, considering the auction was run by a coin firm, its buyer was a coin collector. The Virginia retiree who bought the stamp for $164,500, including the 17.5 percent buyer’s premium, declined to be named publicly but spoke enthusiastically with Linn’s after the sale.

“I never thought I’d own one,” he said, explaining that he had dabbled in stamp collecting as a child, but later found himself more attracted to coins, particularly early U.S. type coins and patterns.

A regular customer of Stack’s Bowers, he said he was drawn to the Locket Copy because of its close association with Col. Edward H.R. Green, the legendary collector who bought the full Inverted Jenny sheet of 100 from a dealer, Eugene Klein, shortly after the error was discovered.

Green is as legendary for his coin collecting as for his interest in stamps. He was the last man to own all five of the famous 1913 Liberty Head nickels, anomalous coins whose origin has never been fully explained.

The sale of the Locket Copy was previewed in the May 18 Linn’s. A full history of the stamp by George Amick, author of The Inverted Jenny: Money, Mystery, Mania, appeared in the May 5, 2014, issue of Linn’s.

The Locket Copy is position 9 from the original sheet of the Inverted Jenny (Scott C3a). It gets its nickname from having been encased in a glass locket, back-to-back with a normal stamp (C3).

When Klein broke up and sold the sheet at Green’s behest, he carefully numbered each stamp in pencil on the back, as an aid to future philatelists. Green retained a number of the inverts, and had one put in a locket for his wife, Mabel. She was not a collector, and she likely never wore the locket, according to Amick.

Nobody in the philatelic community saw the stamp from the time the sheet was dispersed until Mabel’s death in 1950. Even then, it was only shown briefly to a dealer who appraised it for the executors of Mabel’s estate, before vanishing back into a safe-deposit box in a New York bank.

The Locket Copy did not surface again until 1984, when Amick, through some dogged pre-Internet-era sleuthing, tracked down Mabel’s heir. Although he did not name her in his book, she was Dorothy Nicholson Stickles, a friend of the Greens and later a companion of Mabel’s. After she passed away, the Locket Copy came on the market for the first time.

Its newest owner said he thought the stamp surprisingly affordable, considering its unique story among Inverted Jennies and the fact that it is one of just a handful of the famous error to survive in fresh, never-hinged condition – minor corner creases notwithstanding. He said he has no plans yet to exhibit the locket, but is keeping it in New York, concerned about the effect humid Southern summers might have on the stamp’s gum.

And he said he might even resume stamp collecting, now that he doesn’t have to worry about obtaining that key airmail error.

Does the sale of the Locket Copy to a devoted numismatist suggest a new trend, in which philately’s biggest prizes are increasingly snapped up by outsiders?

It was recently revealed that two famous stamp items, the British Guiana 1¢ Magenta and the Inverted Jenny plate block, are now owned by Stuart Weitzman, the shoe magnate and philanthropist, who describes himself as a collector but not necessarily a stamp collector.

Time will tell whether this is indeed a trend and whether it is a good thing for the hobby, bringing much-needed fresh air and attention to the world of stamps.