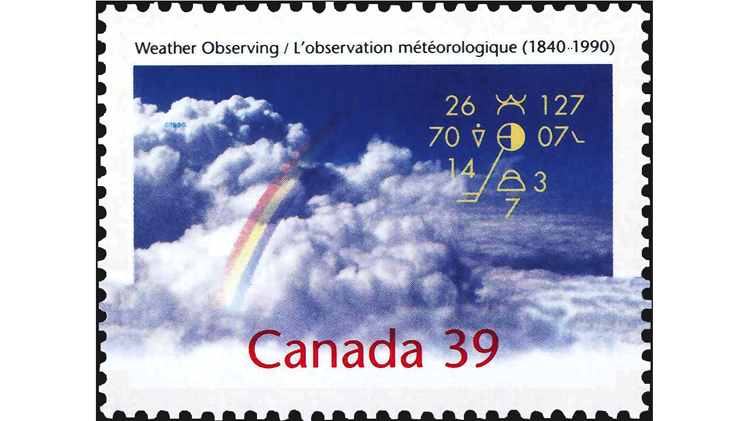 Released in 1968, this 5¢ Meteorology commemorative superimposes a weather map of highs and lows onto a map of Canada and depicts modern tools of the trade. 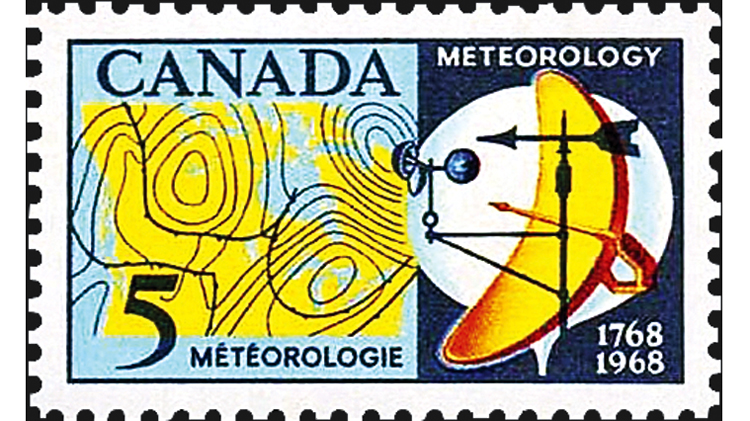 Issued 25 years ago on the 150th anniversary of the establishment of the Toronto Magnetic and Meteorological Observatory, Canada’s 1990 39¢ Weather Observing stamp shows a rainbow, a cloud, and a heavy flurry of weather symbols. 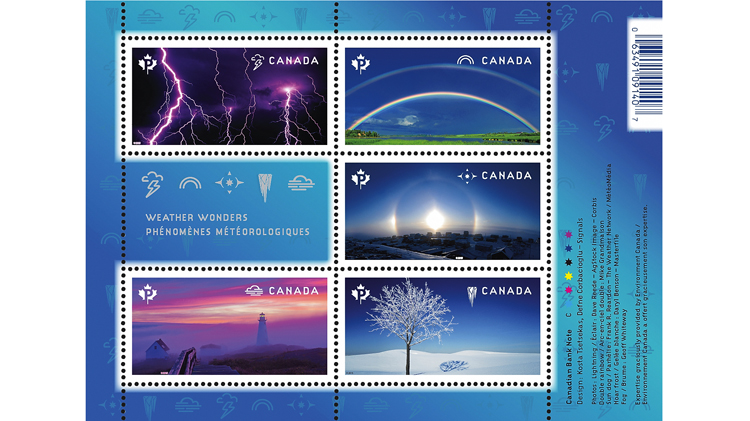 Issued June 18, the five stamps in Canada’s Weather Wonders souvenir sheet feature photographs of the weather from five corners of that vast nation. The stamps also will be available in booklets of 10 stamps each.
Previous
Next

On June 12, with a little help from Canada’s privately owned Weather Network, Canada Post unveiled five new stamps and a souvenir sheet showcasing one of that nation’s most popular topics in every season: the weather.

To be issued June 18, the stamps show Canadian weather phenomena in striking splendor. From brilliant flashes of lightning to the sudden beauty of a double rainbow, the stamps photographically depict the remarkable variety of Canadian weather in photographs from every corner of the second-largest nation on Earth.

Geoff Whiteway focused on hazy, early morning fog at Cape Spear Lighthouse National Historic Site in Newfoundland, where fog is a way of life for many islanders. With 124 foggy days each year, St. John’s, Newfoundland, is the foggiest provincial capital in Canada.

Some 1,250 miles northeast of there, at Iqaluit, on Baffin Island, Frank Reardon captured seldom-seen “sun dogs” — bright spots on either side of the sun from a halo created by ice crystals in the air. He posted his photo on the Weather Network, where Canada Post found it.

“I marvel at the beauty — and violence — of weather in Canada,” says Phillips, “which these stamps spectacularly depict.”

Kosta Tsetsekas and Defne Corbacioglu of the Vancouver-based Signals Design Group used these exceptional images to create a set of stamps tied together using themed icons as a nod to the long history of weather iconography — the small suns, clouds and raindrops seen in weather forecasts.

The 48-millimeter by 26mm stamps are available in booklets of 10, and were printed by Canadian Bank Note in six-color offset lithography with PVA gum. Canada Post printed 350,000 10-stamp booklets, or 700,000 of each stamp. The $8.50 booklet of 10 nondenominated permanent-rate stamps paying Canada’s domestic letter rate (currently 85¢) is Canada Post item 413985111.

The stamps in the booklet are self-adhesive and die-cut, and those in the souvenir sheet are perforated and water-activated.

The official first-day cover is franked with the souvenir sheet and measures 191mm by 113mm, and 11,000 will be printed. Sold for $5.50 each, they are Canada Post item 403985144. Both the cachet and the cancellation depict weather vanes.

The cancellation site is Toronto, chosen because it was the site of Canada’s first weather observatory, the Toronto Magnetic and Meteorological Observatory. The oldest scientific institution in Canada, it celebrates its 175th anniversary this year and is the occasion for the issuance of the stamps.

Shown nearby, that stamp depicts a rainbow superimposed on a cloud bank in the background, with an array of meteorological symbols and numbers prominently shown in yellow in the foreground at top right.

Neither the observatory nor these stamps were the first to express interest in the parade of the seasons in Canada.

In 1968, a 5¢ commemorative (Scott 479) was issued to mark a far earlier and more remote meteorological milestone. It honored the 200th anniversary of Canada’s earliest long-term weather observations in one location: at Fort Prince of Wales, on Hudson Bay across the Churchill River from Churchill, Manitoba, the “Polar Bear Capital of the World.”

From Sept. 10, 1768, to Aug. 27, 1769, scientist-mathematicians William Wales and Joseph Dymond kept detailed daily observations of temperature and air pressure at the fort.

They were among the earliest scientists to recognize that frequent, consistent record-keeping at one site over a long period would provide the most accurate and meaningful picture of annual weather trends.

Collectors interested in climate should visit the exceptional Weather and Climate Philately website maintained by Don Hillger, a research meteorologist with the National Oceanic and Atmospheric Administration at the Cooperative Institute for Research in the Atmosphere at Colorado State University in Fort Collins, Colo., and retired Canadian meteorologist Garry Toth.