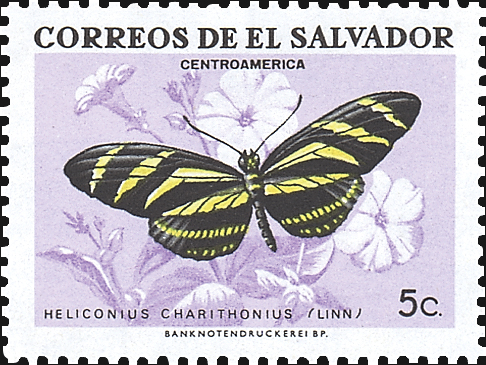 The El Salvador 1969 set of eight Butterfly postage stamps and airmail stamps (Scott 791-794 and C252-C255) is a good buy in mint never-hinged condition at the 2015 Scott Standard Postage Stamp Catalogue value of $78.25.
Previous
Next

El Salvador is the smallest and most densely populated country in Central America. Its classic stamps, including several Seebeck issues, are attractive and interesting, while its modern issues cover a broad range of popular topics.

El Salvador has a small but dedicated following among United States stamp collectors.

Stamp markets with demand from two or more collecting areas are often the most active, so it is no surprise that there is good demand for topical stamps from El Salvador.

In 1969, El Salvador issued a set of eight Butterfly postage stamps and airmail stamps (Scott 791-794 and C252-C255). The 2015 Scott Standard Postage Stamp Catalogue values the set in mint never-hinged condition at $78.25. There is good demand for this set, and it has been selling steadily at the Scott catalog value. It is a good buy at that price.

While the Official mail postal stationery entires are readily available and inexpensive in mint condition, used examples of some are so scarce and so rarely sold that it is difficult for the Scott catalog editors to establish values for them. Values given in the 2015 Scott Specialized Catalogue of United States Stamps and Covers range from $15 for the least expensive up to $200 for the most expensive, with all of the values given in italics.

Never widely available to the public in used condition, those issued after 1990 are particularly uncommon, as fewer and fewer government agencies used Official mail stamps and postal stationery.

The situation is further complicated by the fact that a percentage of those that were used passed through the mail without receiving cancellations or other evidence of being mailed. Examples with clear and legible postmarks can bring a nice premium.

Examples uprated with additional postage in connection with a rate change generally sell for less, but those showing additional franking for special services such as registered mail or to an overseas address would be really unusual and therefore more desirable.

As for price, like much very scarce modern postal history you could find them for almost nothing or pay a lot, depending on how you encounter them. — H.G & R.M.