Taiwan issued stamps each day of the Taipei exhibition, April 24-28 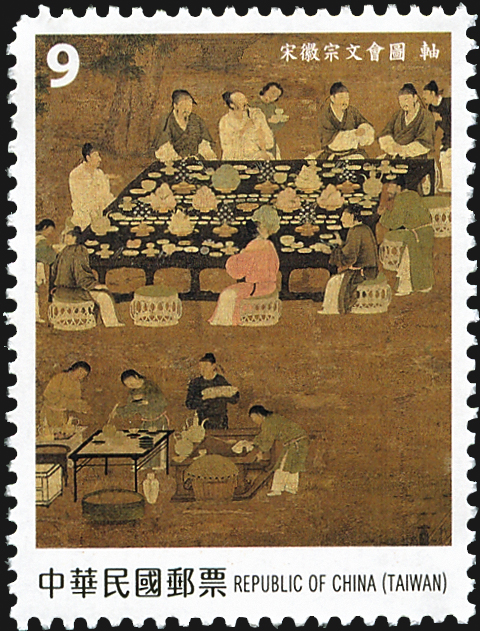 Details of Literary Gathering, a hanging scroll from the Emperor Huizong painting academy, are reproduced on this recent stamp from Taiwan. 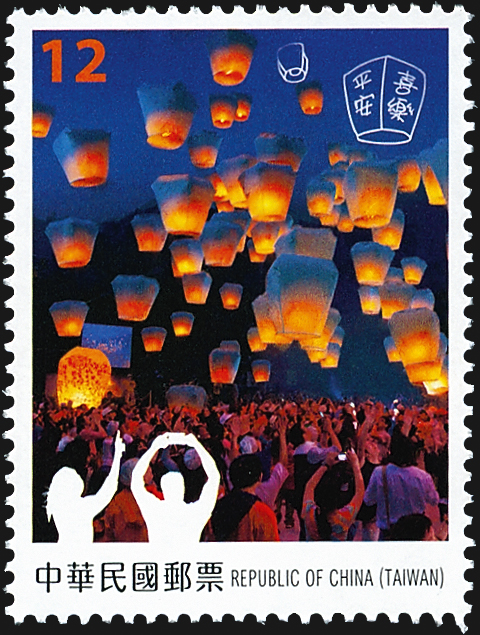 The lantern release at the Pingxi Sky Lantern Festival is pictured on this stamp promoting tourism in Taiwan. 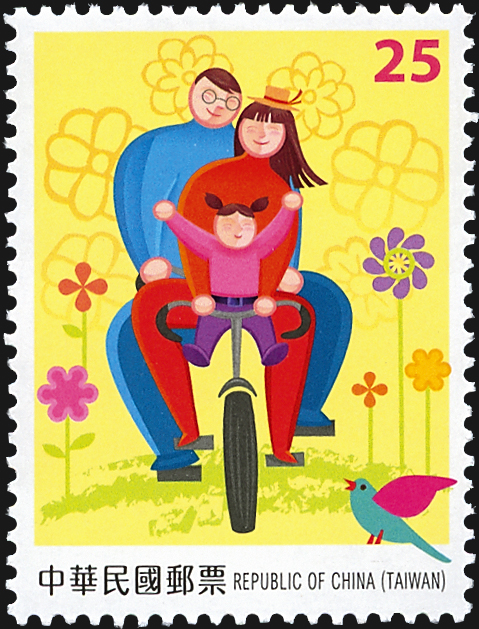 A stamp celebrating Family Day at the exhibition shows a family on a bike ride, surrounded by flowers. 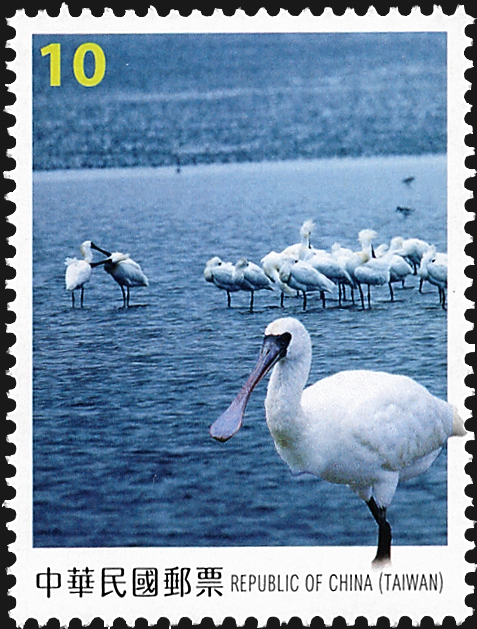 This stamp showing black-faced spoonbills in the Zengwan River estuary wetlands was issued April 25, Ecology Day at the exhibition. 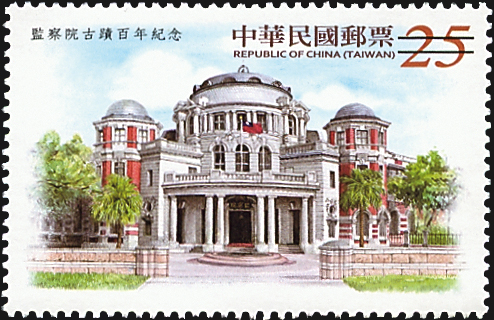 This stamp, also issued April 24 by Taiwan, commemorates the 100th anniversary of the Control Yuan Building. 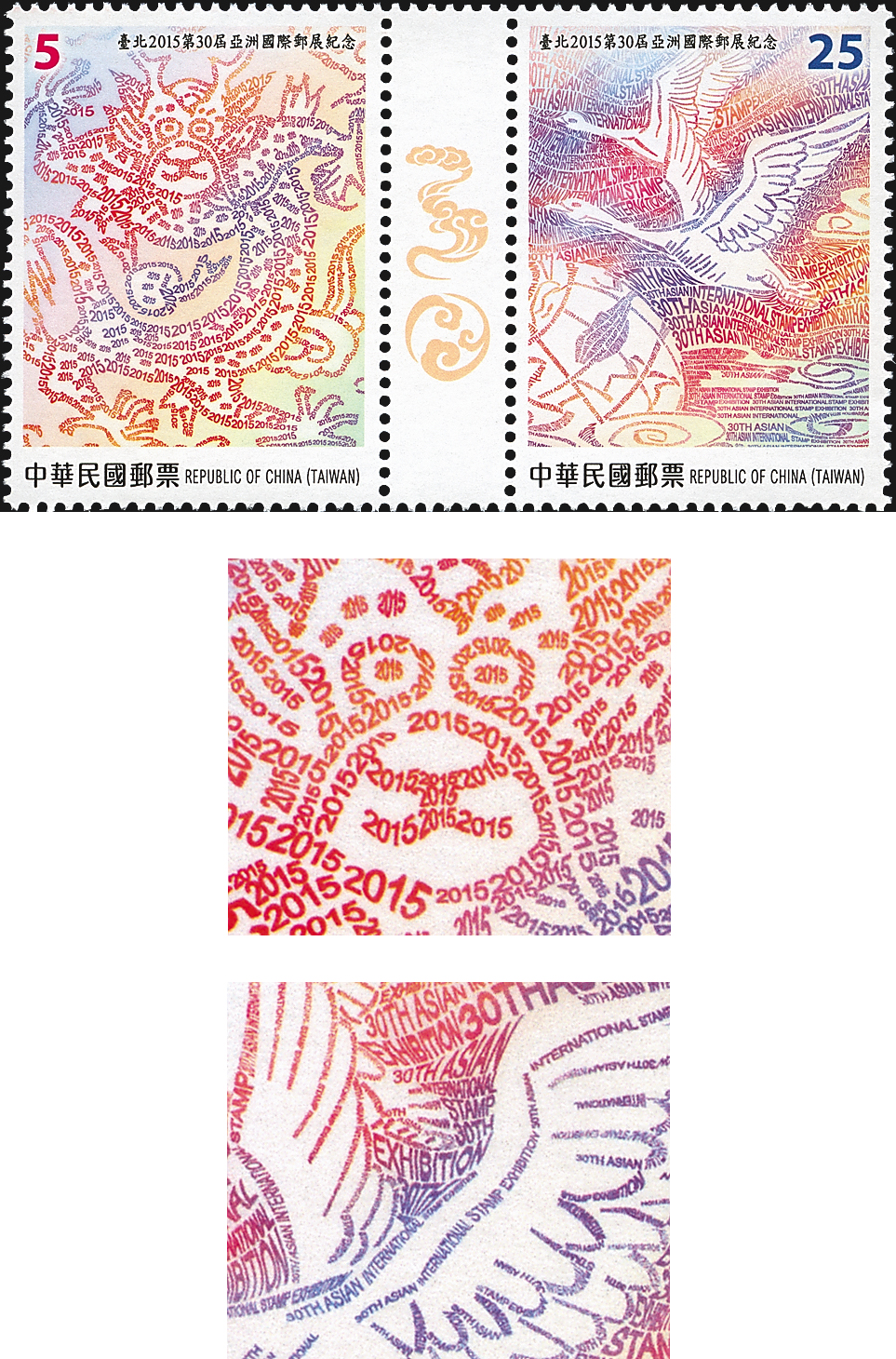 Repeated numbers and words were used to create the designs of two stamps issued by Taiwan on April 24, the first day of the Taipei 2015 30th Asian international stamp exhibition. To show detail, a section of each design is enlarged.
Previous
Next

The images featured on two new stamps from Taiwan were created using numbers and words. Both stamps were issued April 24, the first day of the Taipei 2015 30th Asian international stamp exhibition.

The year “2015” repeated in varying sizes and shades of red and purple forms the outline of the symbolic dragon and cloud pictured on the NT$5 stamp. Chunghwa Post compares the design to China’s first stamps of 1878, nicknamed the Large Dragons.

The NT$25 stamp also is reminiscent of the design of another Chinese stamp issue, the 1949 Flying Geese Over Globe. On the new design, the geese and globe were created through repeated uses of the words “30th Asian International Stamp Exhibition” in English.

Delta Design Corp. designed the stamps. Southern Colour Print of New Zealand printed them by offset in panes of 16 and souvenir sheets of four.

The pane of 16 includes eight pairs of the stamps with the two designs separated by a label showing a cloud pattern forming “30” for the 30th Asian international stamp exhibition.

The souvenir sheet includes four stamps with the two designs se-tenant. The center perforation between each pair is in the shape of conjoined diamonds.

The geese design is repeated in the selvage of the souvenir sheet.

A computer-vended postage label also was available at various locations in Taiwan on the first day of the exhibition. The design of this postage label includes the exhibition’s logo and images of Taiwan trout. This rare fish species is protected as a national treasure.

Bird species are featured on a pair of stamps issued April 25, the second day of the exhibition, Ecology Day.

The NT$10 denomination shows a scene of black-faced spoonbills (Platalea minor) at the Zengwen River estuary wetlands. The spoonbills are winter visitors to the wetlands. The NT$25 denomination pictures a black-winged stilt against a backdrop of mangroves at the Sicao wetlands in the Taijian Inland Sea.

Cartor Security Printers of France printed the two stamps by offset in panes of 16, with two vertical se-tenant pairs of the top of the pane and a block of 12 at the bottom with nine labels separating the two stamp designs.

April 26 was Family Day at the show, and the two se-tenant stamps issued that day depict families playing together.

On the NT$5 stamp, a mother, father and son are assembling large building blocks. Another family of three, this time with a daughter, are enjoying a bike ride on the NT$25 stamp. Flowers and a bird are part of the scene of the latter design.

China Color Printing Co. printed this issue, called Family Comes First, in a souvenir sheet of four and a pane of 16.

For Tourism Day on April 27, stamps showing scenes of a lantern festival and a coral formation were issued.

The NT$12 stamp depicts a crowd watching the Pingxi Sky Lantern Festival. Several people in the crowd are taking photographs as thousands of lit lanterns ascend into the night sky. Also, silhouettes of two symbolic tourists are included in the lower left of the design, and one of them also is photographing the event.

Pictured on the NT$25 denomination is Vase Rock, a coral formation resembling a vase filled with flowers. The formation is located off a beach on Xiaoliuqiu, Taiwan’s only large coral island. One of the two symbolic tourists included on this design is looking at Vase Rock with binoculars.

The two stamps are in a pane of 16 with the different designs separated by small labels. Cartor printed the stamps.

The first, called Literary Gathering, is a hanging scroll  from the painting academy under the direction of Emperor Huizong (1082-1135). The second, Elegant Gathering in the Western Garden, was painted by Zhao Mengfu (1243-1322). The stamps are denominated NT$9 and NT$25, respectively.

Cardon Enterprise Co. printed them by offset in a souvenir sheet of two and in a pane of 16 with two blocks of eight.