A last-day-of-sale ceremony program for the Comic Strip Classics stamps. The ceremony was held in 1997 at an ASDA stamp show. 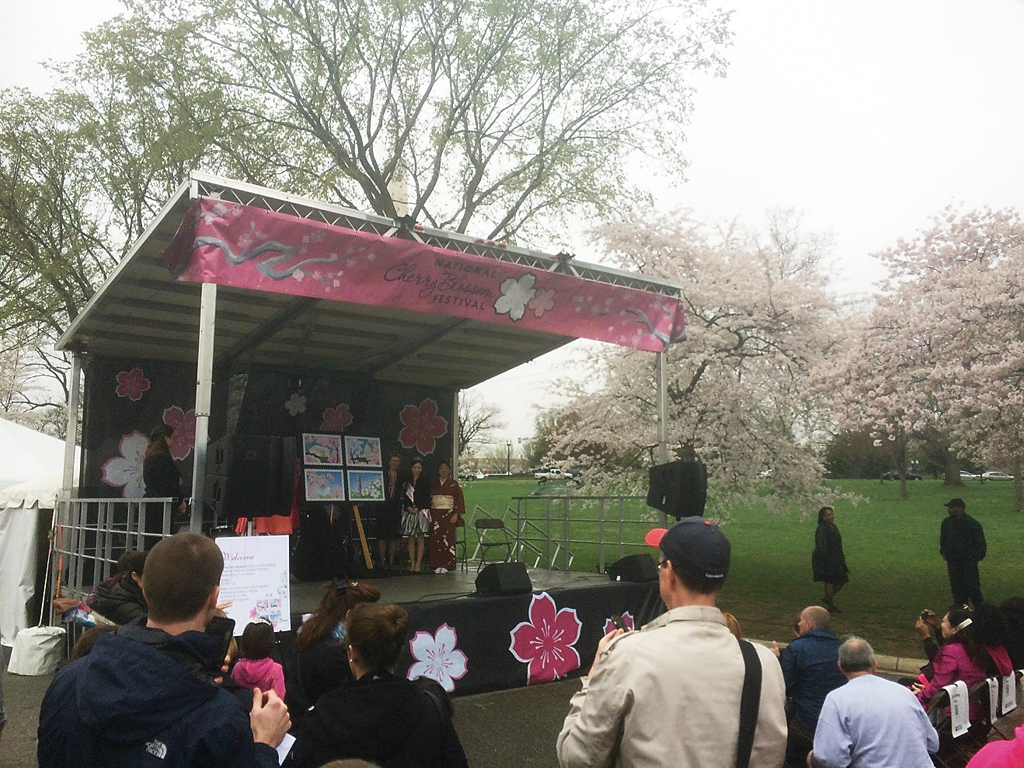 At the first-day ceremony for the Gift of Friendship joint-issue with Japan, held in Washington, D.C., both the U.S. and Japan stamps were available.

A combination first-day cover for the Cherry Blossoms Centennial stamp issued March 24, 2012. The envelope with silk cachet was only available at the first-day ceremony. However, the stamps of Japan were not available. 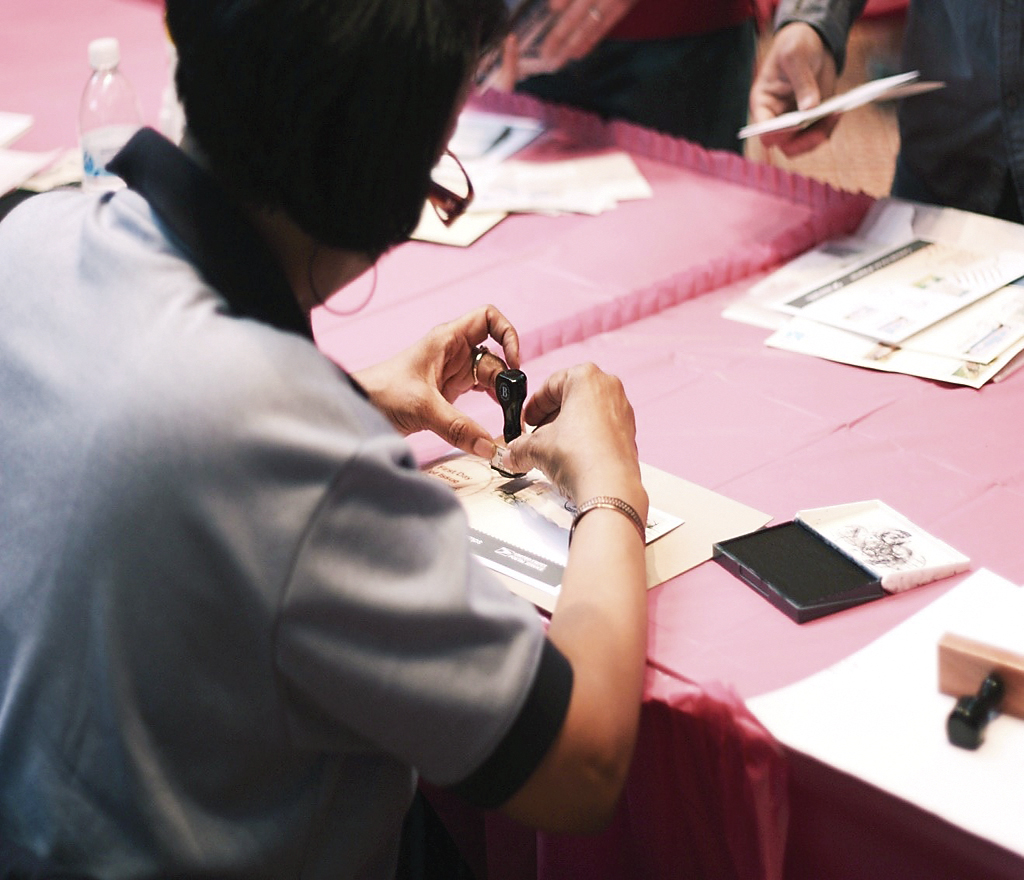 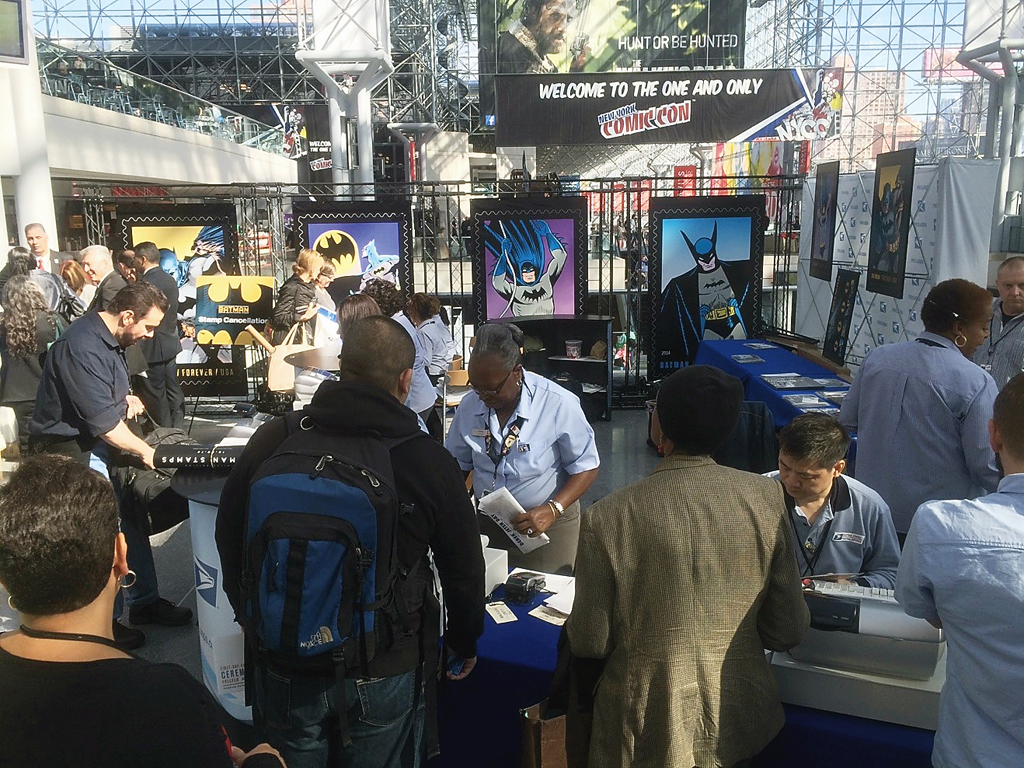 The Postal Service sales booth at the Oct. 9, 2014, first-day ceremony for the Batman stamps. The ceremony was held in New York in conjunction with Comic Con. 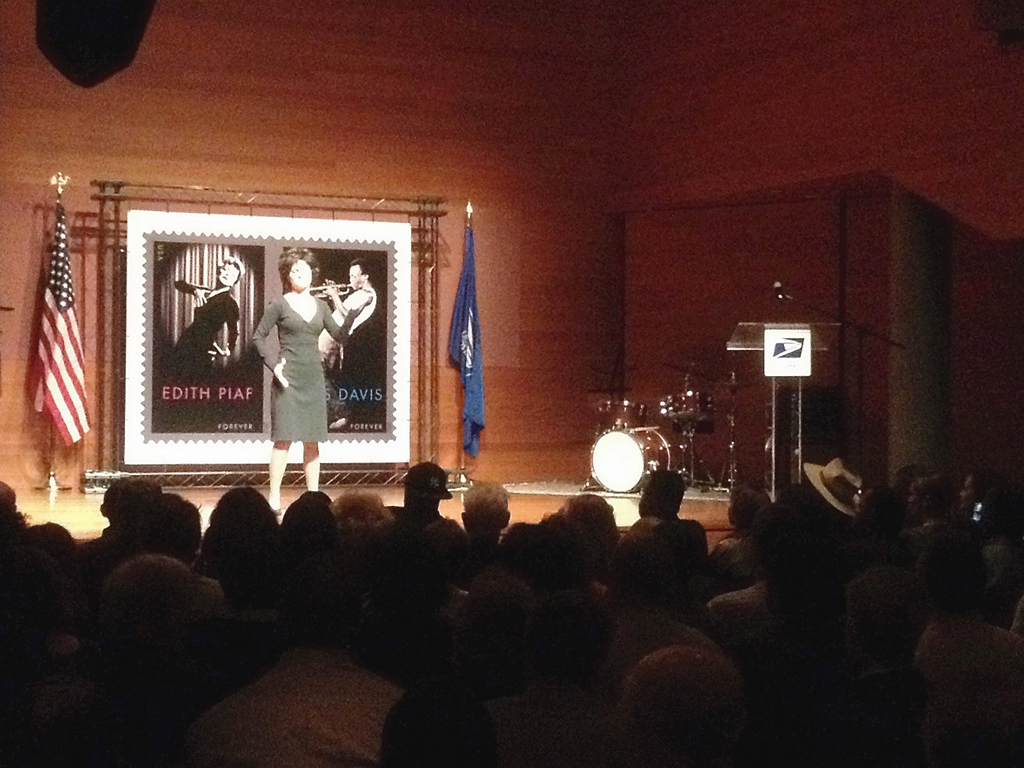 The first-day ceremony for the Edith Piaf and Miles Davis stamps featured live performances by a professional singer and jazz musicians. 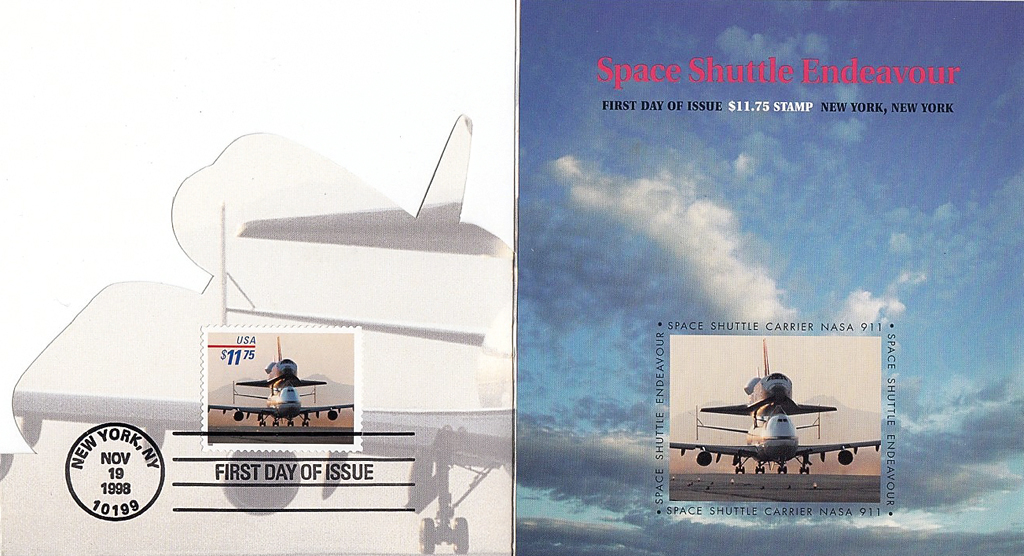 A first-day ceremony program for the $11.75 Piggyback Space Shuttle Express Mail stamp. The Postal Service only rarely affixes the stamp to the program for such high-face-value issues. 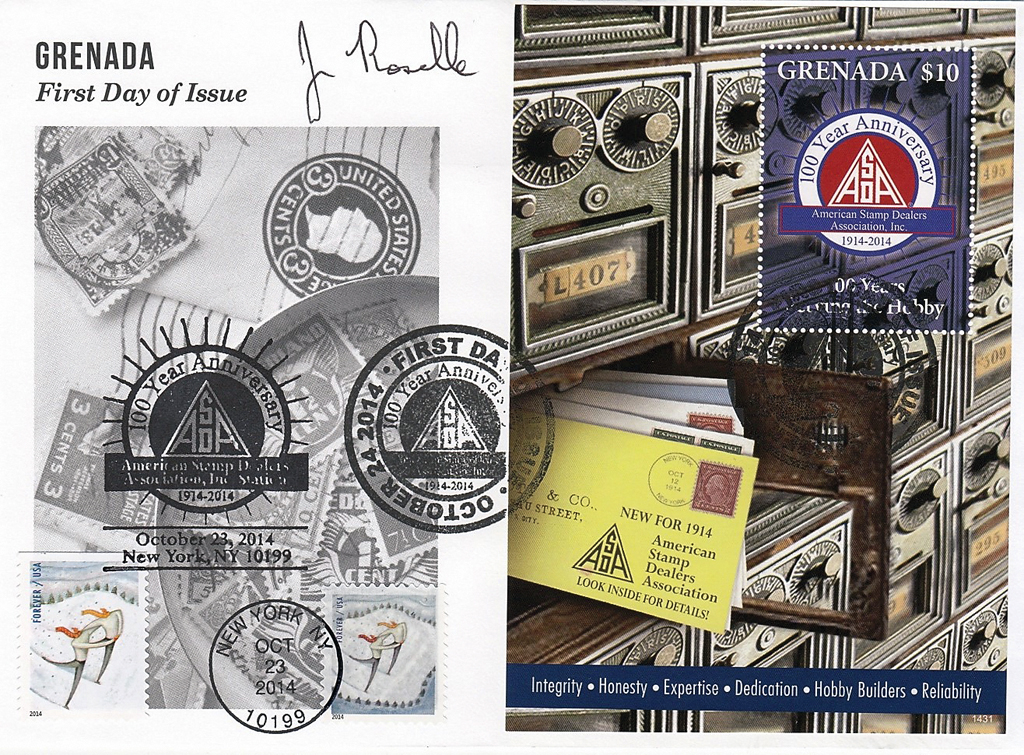 A program from the island nation of Grenada for a first-day ceremony held at a stamp show in New York City. The stamp marks the American Stamp Dealers Association’s centennial. The program also bears a U.S. stamp issued the day before.

The first-day ceremony program for the Water Lilies stamped envelopes issued in April 2015 at a stamp show. 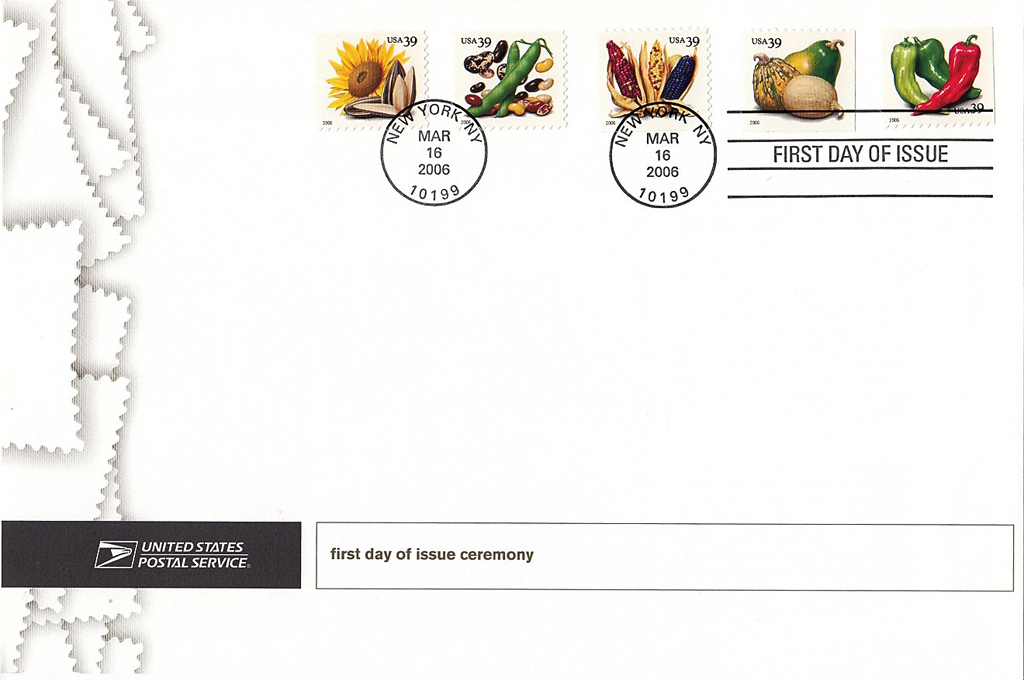 The first-day ceremony program for the five 2006 39¢ Crops of the Americas stamps atypically bears all five stamps. For multiple-design issues, usually only one stamp is affixed to the ceremony program.
Previous
Next

First-day ceremonies are wonderful promotional events organized by the United States Postal Service for most commemorative and some definitive (regular-issue) stamps.

During the past two decades, I have attended dozens of first-day ceremonies all over the country. Most were for stamps issued for subjects that interest me.

Although the ceremonies are date and location specific, they fit in my “Stamp Quest for Travelers” theme. Attending often involves some kind of travel to fulfill the enthusiast’s quest.

I want to share my experiences and provide a guide of what to prepare for and expect while attending a ceremony.

Postal Service event coordinators and staff usually hand out first-day ceremony programs to attendees prior to the ceremony. These collectible ephemera are distributed free of charge to attendees.

For those who don’t attend, they can be purchased online from Stamp Fulfillment Services.

They are usually in the form of an envelope with a generic design for all stamps issued during the year. Each envelope will have one of the stamps being issued affixed.

If it is an issue with multiple designs, usually only one stamp, chosen at random, will be on the envelope.

Some programs have the entire set affixed. For example, the program shown nearby bears a set of five 39¢ Crops of the Americas stamps (Scott 4003-4007).

The stamp or stamps are tied with a first-day-of-issue postmark for the city where the event takes place. Inside the envelope, there is a program card that lists the events planned and the names of those who will speak at the ceremony.

These collectible souvenirs given out free are a great incentive for people to attend the ceremony.

In 1998, I received the program card for the $11.75 Piggyback Space Shuttle Express Mail stamp (Scott 3262) with the stamp affixed.

It is unusual for the Postal Service to affix such high-face-value stamps to the programs. At the ceremony, the speaker urged attendees not to soak the stamps off but to keep the souvenir intact.

For example, the singer and jazz performers at the Miles Davis and Edith Piaf stamps (Scott 4692-4693) ceremony were so terrific that I could hardly believe the event was free and open to the public. Sometimes attendance is limited, and a reservation is required to attend.

After the ceremony, the Postal Service often arranges with the speakers and performers to sign autographs for attendees. Most people line up to have their programs and first-day covers signed.

Artist Jim Lee, who illustrates the present-day Batman comics, signed autographs after the ceremony. Because of the long lines, the Postal Service restricted the autographs to one item per attendee. Most who attended were able to get an autograph.

One of the most obvious attractions of first-day ceremonies is the ability to buy the new stamps at the ceremony. The Postal Service usually sets up booths or tables featuring sales and a cancellation station.

Unlike Postal Service booths at typical stamp shows, the booths at first-day ceremonies only sell the new issue being celebrated, FDCs, and souvenirs associated with the new issue.

For example, at the Cherry Blossom Centennial (Scott 4651-4652) ceremony in Washington, D.C., there was a special envelope with a silk cachet. This envelope was not available online from the USPS or from the USA Philatelic catalog.

I brought mint older U.S. stamps with related themes to the ceremony and was able to service combination silk FDCs, which would not have been possible had I not attended the ceremony in person.

The only disappointment at the Cherry Blossom Centennial ceremony was that the joint-issue Japan stamps with similar designs were not available at the ceremony. As a joint-issue collector, I had hoped to service an FDC with both the U.S. and Japan stamps.

I have been collecting joint-issue stamps for many years, and I am especially fond of FDCs with both countries’ stamps and corresponding postmarks.

Though I learned from Linn’s coverage that the Postal Service would have the Japan stamps available, I was not sure if they were readily available at the ceremony.

I was excited that the Postal Service not only had the Japan stamps for sale, but also that the Japan cancellation was available at the booth. I was able to service covers using illustrated envelopes that I prepared in advance.

This was the second joint issue with coordinated issue dates and designs that I attended in recent years. The previous joint-issue ceremony was for the Miles Davis and Edith Piaf joint issue with France, held in New York City.

At both ceremonies, I brought my own cacheted envelopes and serviced them with the stamps and cancels of both countries.

While waiting in line at first-day ceremonies, I have often been asked by other attendees and passersby what they are supposed to do with the stamps and cancels.

As long as the affixed stamps at least meet the current first-class rate, the Postal Service is most happy to cancel the item wherever the stamp is applied.

The policy, as I understand it, is one cancellation per stamp maximum. What arrangement of stamps should be affixed to which cover is entirely up to the collector.

I am always happy to share with others how I plan to service and collect my covers. While sharing, I have even made a friend or two.

For instance, Holiday stamps are often issued during the American Stamp Dealers Association show each October in New York City.

I imagine that several first-day ceremonies will be scheduled during the World Stamp Show — NY2016 exhibition to be held in New York City May 28-June 4, 2016.

Other types of ceremonies are sometimes held. In 1997, I attended a last-day-of-sale ceremony for the Comic Strip Classics stamps (Scott 3000) held at the ASDA’s Mega-Event stamp show in New York City. The souvenir program from that event is a cherished part of my collection.

The ceremony program was not the typical stamped cover, but a printed program without a stamp or cancellation.

Grenada’s postal administration did not have any representative at the ceremony. The ceremony was administered by Grenada’s stamp design and distribution agent, Inter-Governmental Philatelic Corporation.

Attendees received FDCs for the issue. I affixed a U.S. Winter Fun stamp issued the day prior and had it canceled with the similar pictorial postmark, also signed by the designer.

Here are my suggestions for attending first-day ceremonies.

Check the Postal Service event announcement online and Linn’s for details of when and where the ceremony will be and any special requirements for attendance.

Arrive at the site on time or slightly ahead of time to get a good seat and obtain a ceremony program.

Enjoy the event and then get in line to obtain autographs, if available.

Purchase stamps, FDCs and souvenirs in accordance with your budget and collecting preferences.

Prepare and service your own cacheted envelopes, if desired.