The best-known Canadian photographer of the 20th century, Yousuf Karsh was honored with the self-portrait at left (Scott 2270), one of three designs celebrating his work in a 2008 Art Canada issue. Based on one of Karsh’s great portraits is a pho 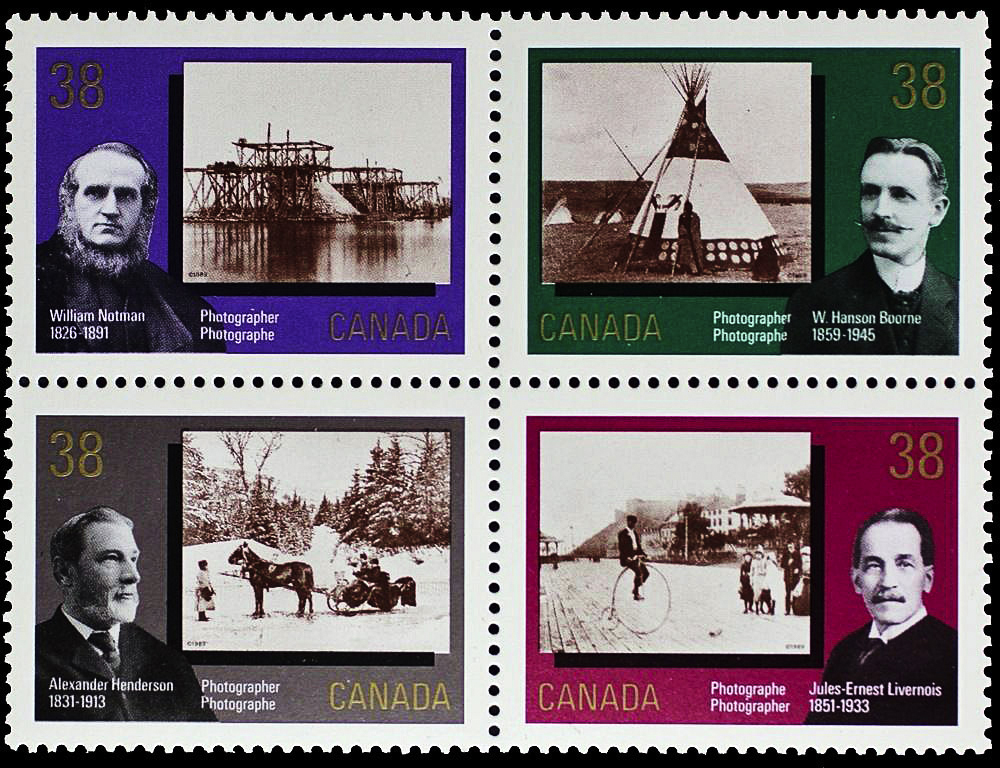 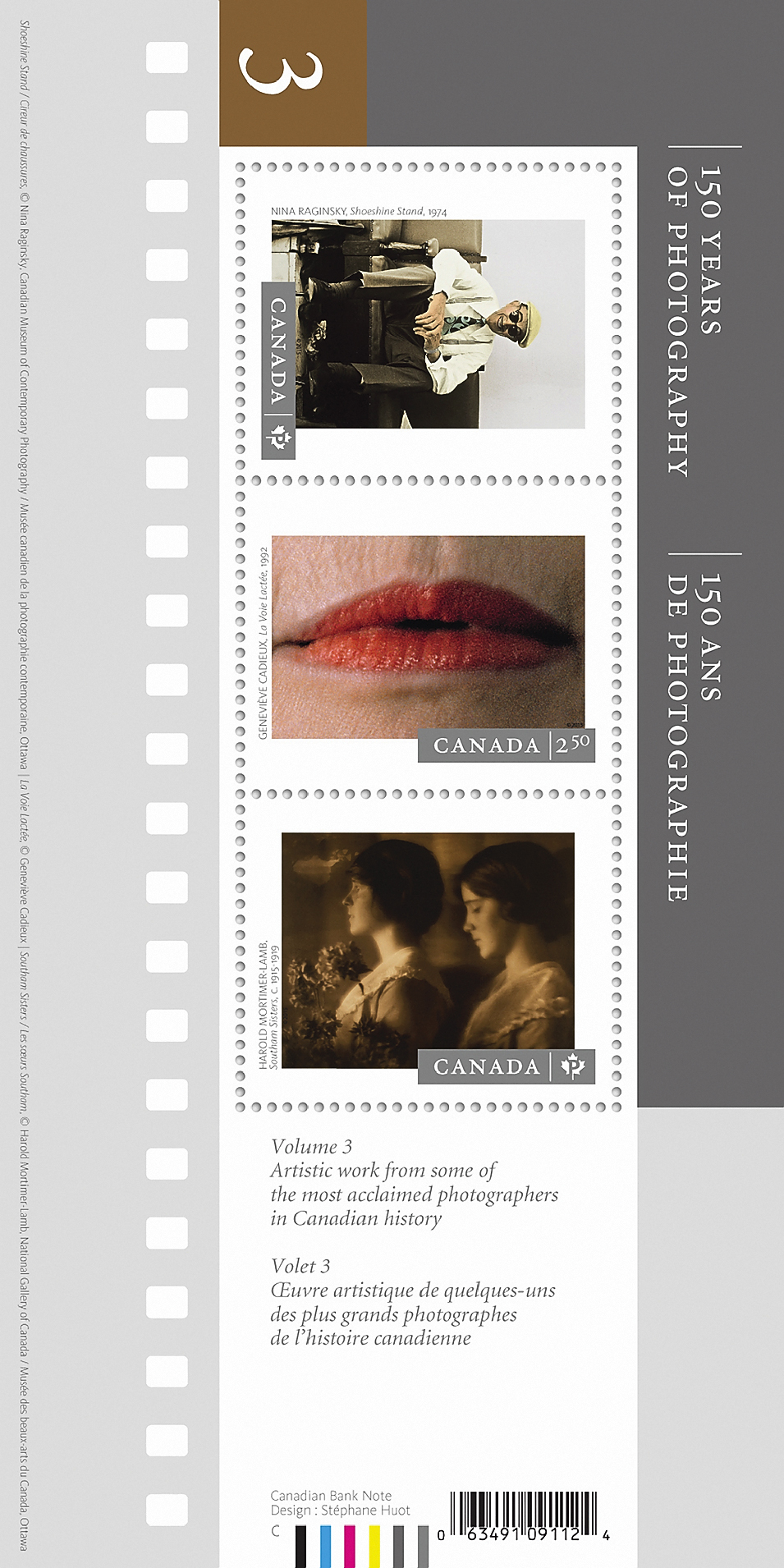 This souvenir sheet of three Canadian Photography stamps features two permanent stamps and a $2.50 stamp showing a color photograph of a woman’s lips by Genevieve Cadieux. 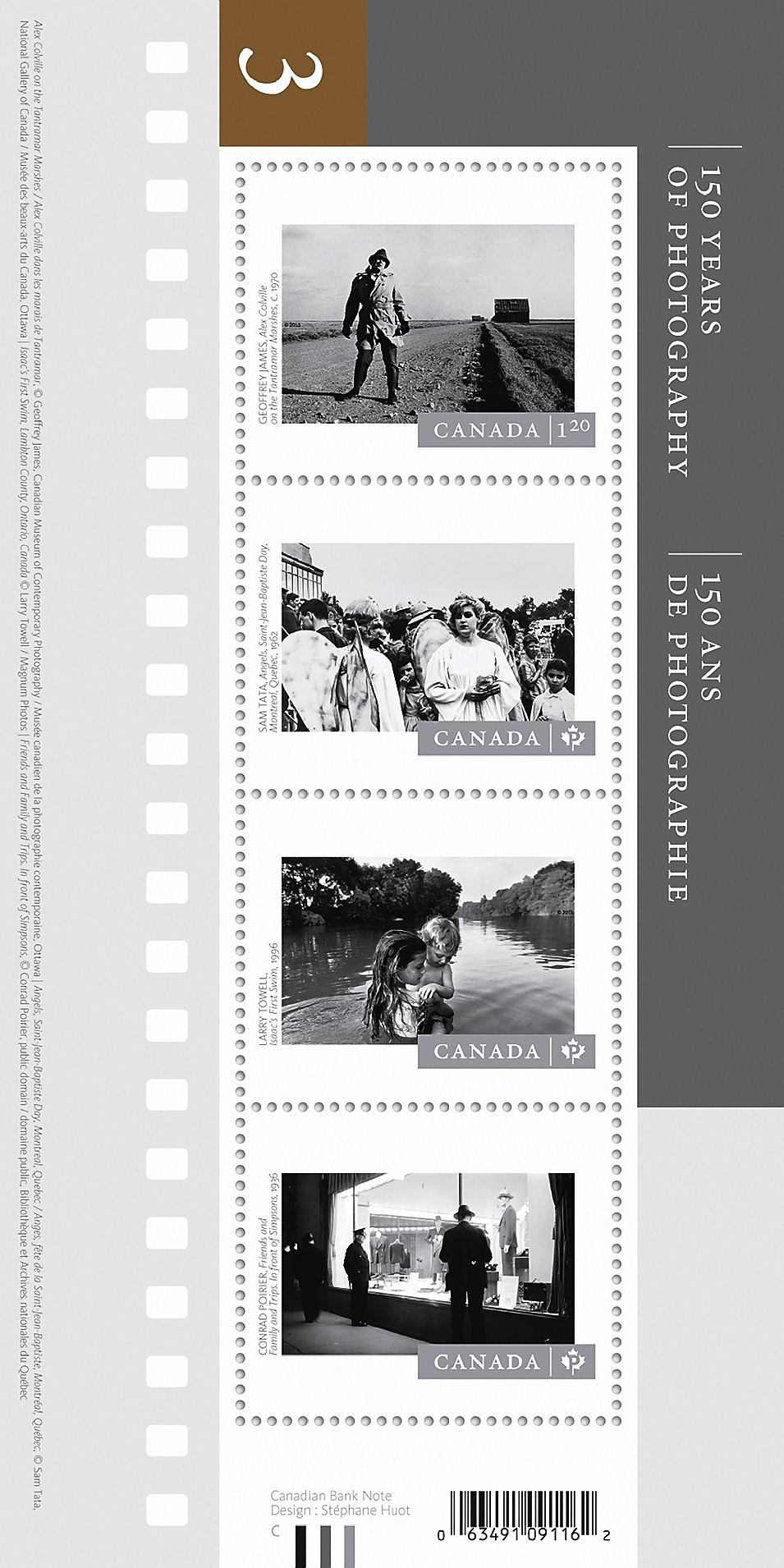 The five self-adhesive permanent stamps are sold in booklets of 10 with two of each design.

These five 36-millimeter- by 30mm stamps are being issued in a self-adhesive booklet of 10, a symmetrical arrangement of two stamps in each of the five designs with serpentine die cuts between them.

The permanent-rate 2015 Canadian Photography stamps reproduce the following photographs: Shoeshine Stand, shot by Nina Raginsky in Vancouver, B.C., in 1974 when she was working as a street-portrait photographer; Angels, Saint-Jean-Baptiste Day, taken by Sam Tata in Montreal in 1962; Friends and Family and Trips, In front of Simpsons, by Conrad Poirier, taken in 1936 in Montreal;  Southam Sisters, Montreal by Harold Mortimer-Lamb, photographed circa 1915-19; and Larry Towell image of Isaac’s First Swim, Lambton County, Ontario, Canada 1996.

The $1.20 and $2.50 stamps will be sold in separate self-adhesive booklets of six identical designs.

The $1.20 stamp shows a photograph of renowned Canadian painter Alex Colville on the Tantramar Marshes near Sackville, New Brunswick, taken by Geoffrey James, circa 1970.

The $2.50 stamp reproduces the color image of a woman’s lips titled La Voie Lactee (“The Milky Way”) by Genevieve Cadieux, whose work “explores topics of identity, gender and the human body.”

Two souvenir sheets with moisture-activated adhesive will be issued.

Each card has a precancel that resembles the shuttered aperture of a camera.

According to Canada Post, all stamps were printed by offset lithography by Canadian Bank Note, and have PVA gum.

Canada Post will offer 11,000 official first-day covers for each of the two souvenir sheets with shuttered aperture postmarks of Montreal, Quebec, a city associated with the careers of many of this year’s honorees. Priced at $9.95, the FDCs are item number 403978144.

Canada Post products are available at from its online shop.

The 2015 Canadian Photography stamps are the middle installment in a short series that began in 2013 with seven stamps (Scott 2626-2634).

In all, 35 prominent Canadian photographers, or seven per year,  will be honored. All items in the series to date have been designed by Stephane Huot of Montreal.

According to Canada Post, “The images in the series were chosen by leading curators and gallery owners to showcase the best Canadian photography from the past 150 years.”

Collectors with a longer perspective know that the first such issue was a 1989 se-tenant block of four 38¢ stamps (Scott 1240a), commemorating 150 years of Canadian photography.

A self-portrait of Karsh appears on the 52¢ letter-rate value in that 2008 issue (Scott 2270). It is shown nearby, alongside an essay and the issued 1¢ denomination for the first set of Canadian definitives to honor Queen Elizabeth II, based on one of Karsh’s memorable photographs and issued in 1953 (Scott 325-329, 331-333).

Today — 62 years later — Karsh’s iconic images live on in Canadian stamps. The design on the 2015 $2.50 Nelson Mandela sheet was adapted from “a photograph taken by Yousuf Karsh on Mandela’s first visit to Canada in 1990, just four months after [Mandela’s] release from prison.”