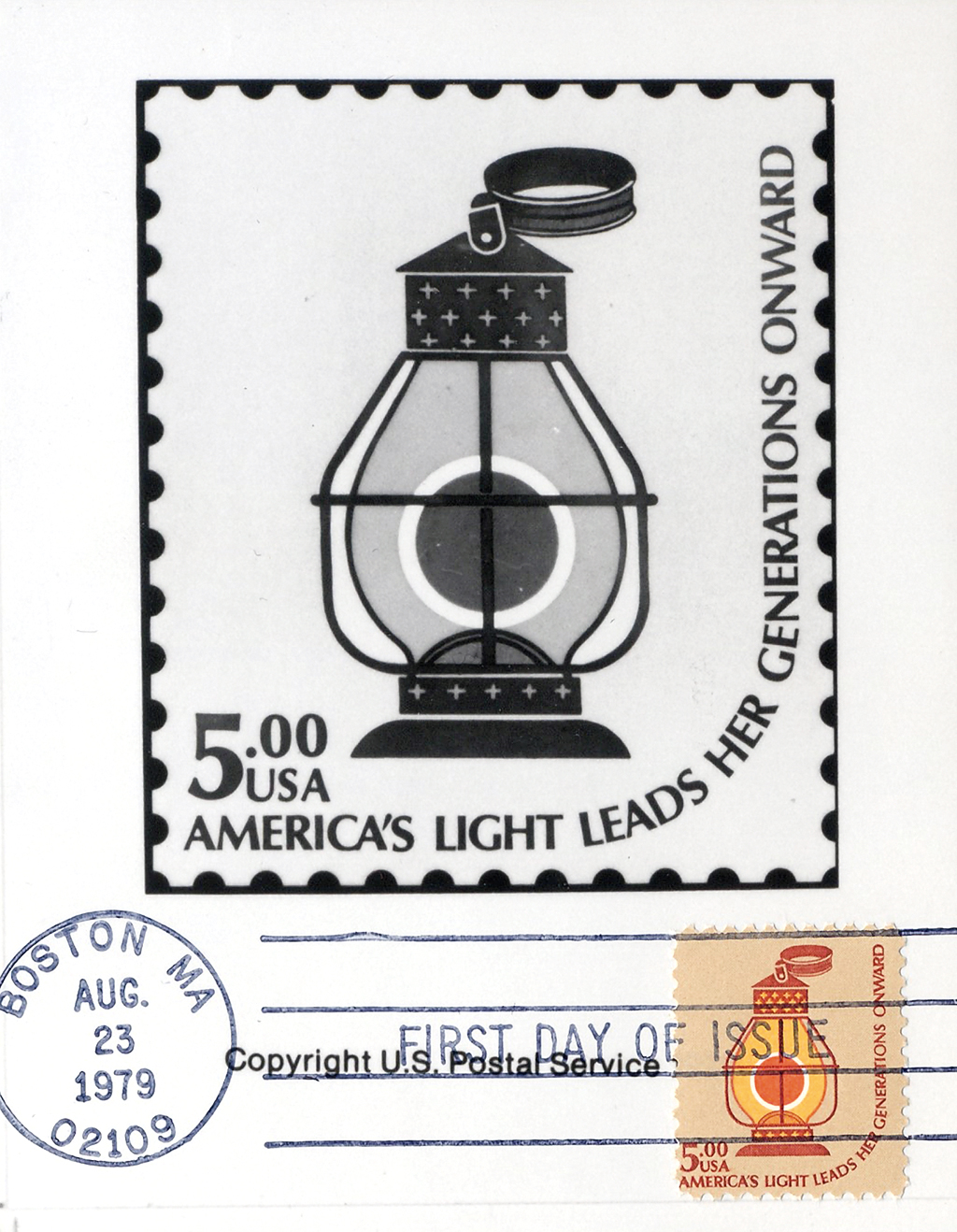 The author created a first-day souvenir for the 1979 $5 Railroad Conductor’s Lantern issue by adding the new stamp and cancel to a USPS publicity photo.

Let’s answer a number of questions that have come up recently, both in response to columns and elsewhere.

Last month’s column said that Nancy and Doug Clark’s “Jamestown Settlement — 400th Anniversary” exhibit is believed to be the first FDC exhibit to win an award at an international stamp show.

Reader Charles J.G. Verge replied, “I entered my ‘The FDCs of the American Dental Association 1959 Centennial’ at China 2009, removing ‘The FDCs of’ from the title so it would be selected.”

Glenn Estus wrote that he had received a “Large Silver (78 points) and Special Prize for my exhibit on the 1932 Lake Placid Winter Olympics stamp” at Olymphilex 2004, held in Atlanta during the Olympic Games there. (Nancy Clark, who was the United States commissioner for that show, notes that Olymphilex 2004 “was not granted full status for political reasons.”)

All involved in the e-mail discussion about FDC exhibiting, however, agree that the tide is turning, and look forward to the reception that such exhibits will receive at World Stamp Show-NY 2016 as an experimental exhibit group.

A reader named Walter asked via e-mail about the time it takes to get FDCs back from servicing.

At certain times when there are several popular new issues close together, a month or more for turnaround is not unusual.

We just passed one of those periods (Love, Lunar New Year, Black Heritage and Wedding) and are about to hit another (Maya Angelou, Civil War and the Gifts of Friendship joint issue within four days). Another backed-up time is when all the Christmas issues come out, and rate changes also create a logjam.

Servicing requests for fewer than 50 covers (10 if requested by Priority Mail or Priority Mail Express) should be sent to the official first-day city. That post office is supposed to group these requests together and forward them to USPS Cancellation Services in Kansas City. This step could add two days or more to the processing time.

For dealer/servicer orders of 50 or more FDCs, Cancellation Services gives first priority to requests that come in via Priority Mail Express (generally, those of large dealers); then those shipped via Priority Mail; and last, those by regular mail.

If you are wondering why there is the extra step of sending small orders to the first-day city post office and not directly to Kansas City, the reason is because the first-day post office sorts and groups the small-order requests.

Last May and June, for example, Cancellation Services knew that all packages of FDCs from the Sarasota post office were for the Vintage Circus Posters stamps.

So why not have collectors put the name of the issue on their outside envelopes? This action actually is requested now, as part of the servicing address given for each issue, but not all customers do it.

Another question received recently asked what are or were the small black-and-white glossy photographs and color transparencies of stamp designs, often with the legend “Copyright U.S. Postal Service.” These were official USPS publicity photos distributed to the philatelic mailing list for the use of publications writing about upcoming new issues.

The standard for commercial black-and-white publicity photos in the mid-20th century was 4 inches by 5 inches; the USPS sometimes used slightly different sizes.

I serviced some of these photos with their respective stamps and postmarks, including the $5 Railroad Conductor’s Lantern stamp (Scott 1612) issued Aug. 23, 1979.

A final question for this column regarded the backdating of local post office cancels. There is a 60-day grace period for “First Day of Issue” cancels (120 days for registered dealer/servicers) and servicers have 30 days to submit requests for non-first-day pictorial postmarks.

However, clerks are prohibited from setting back the date on the everyday canceling devices, so there is no grace period for these.

Does that mean it never happens? Of course not, but it is rare.