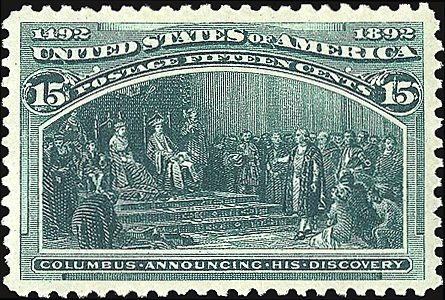 The circumstances of history have resulted in a small number of foreign rulers appearing on United States stamps. King Ferdinand II was one of the first, owing to his sponsorship, with his wife Queen Isabella, of the 1492 voyage of Christopher Columbus to the New World.

The marriage led to a union of kingdoms and the eventual creation of Spain. Following the conquest of Granada, the two monarchs supported Columbus in his efforts to find a new westward ocean route to Asia.

The U.S. Post Office Department issued a set of 16 stamps in 1893 to celebrate the World's Columbian Exposition taking place in Chicago, Ill., and to mark the 400th anniversary of Columbus reaching America.

Ferdinand and Isabella are featured on stamps from this series, including the 15¢ dark green (Scott 238), which is inscribed "Columbus Announcing His Discovery" along the bottom of the stamp design.

The engraved vignette, executed by Charles Skinner, is based on a painting by Ricardo Balaca y Orejas Canseco that shows the two monarchs upon their thrones at left as Columbus, standing at right, reports his discoveries. The frame and lettering were engraved by Douglas S. Ronaldson.