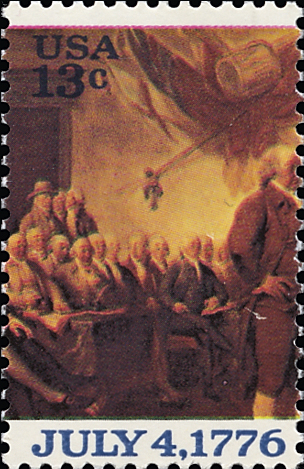 Robert Treat Paine, a signer of the U.S. Declaration of Independence, was born March 11, 1731.

The 1976 13¢ Declaration of Independence issue shows John Trumbull's painting of the signing across four se-tenant stamps. In the second stamp, Robert Treat Paine is seated between Elbridge Gerry and Abraham Clark.

Robert Treat Paine, born March 11, 1731, was a representative from Massachusetts to the Continental Congress and a signer of the Declaration of Independence.

Although his father's name was Thomas Paine, he was not related to the political activist Thomas Paine who wrote Common Sense and The Age of Reason, and who appeared on 40¢ stamp in 1968. The two men were contemporaries, but not always sharing the same point of view.

Robert Treat Paine was born in Boston and graduated from Harvard College. He worked as a teacher and merchant before continuing his studies in law. He eventually served as a justice of the peace and participated in the prosecution of Capt. Thomas Preston and British soldiers in the aftermath of the 1770 Boston Massacre.

Paine was a delegate to the Provincial Congress in 1774 and 1775 before serving in the Continental Congress, where he signed the Declaration of Independence in 1776.

In later years Paine was a delegate to the Constitutional Convention and a judge of the Massachusetts Supreme Court. He died in 1814 at age 83.

John Trumbull's 1818 oil painting Declaration of Independence shows the scene when the first draft of the document was presented to the Second Continental Congress. The painting first appeared on a 24¢ stamp in 1869 (Scott 120), and has been featured on other stamps since.

In 1976 the painting was depicted across four 13¢ stamps in a configuration known as a quadripartition. Robert Treat Paine is seated in the group shown on the second stamp in that 1976 issue (Scott 1692). Behind his head is the left sleeve of the dark coat worn by delegate George Clymer of Pennsylvania.