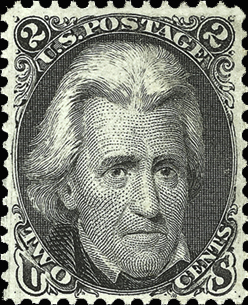 The seventh president of the United States, Andrew Jackson, was born March 15, 1767. Where he was born has been disputed, but it was in the vicinity of Lancaster County, on the border now separating South Carolina and North Carolina. At 13 he acted as a messenger for the Continental Army and, despite his incomplete schooling, he became a lawyer in 1788. He later served as a judge and was a plantation owner, and became Tennessee's representative in Congress and the Senate.

After leading an army of mostly inexperienced volunteers to victory at the Battle of New Orleans in the War of 1812, Jackson gained national fame and enjoyed populist appeal. He ran for president in 1824, but John Quincy Adams was named the winner of that election. Four years later, Jackson soundly defeated Adams to become president.

During his presidency, Jackson focused on repairing the economy, ending corruption and preventing South Carolina from seceding over a tariff dispute. But he also implemented the Indian Removal Act, which led to the Trail of Tears and the death of many Native Americans forced to relocate.

Jackson served two terms before retiring to his mansion, The Hermitage in Nashville, where he died in 1845.

A 2¢ black stamp honoring Jackson was issued in 1863 and is known to many collectors by its nickname, the Black Jack (Scott 73). The stamp, designed by James Macdonough, includes a large portrait of the president engraved by Joseph P. Ourdan.

Jackson has appeared on many U.S. stamps over the years, including a diamond-shaped $5 stamp from 1994 that shows him side-by-side with George Washington (Scott 2592).