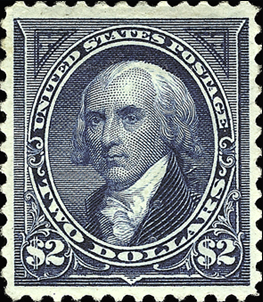 America's fourth president, James Madison, was born March 16, 1751, in the Virginia Colony, at Port Conway. He attended the College of New Jersey (now known as Princeton) and served in the Continental Congress.

Madison is generally identified as the father of the Constitution and the Bill of Rights. In 1788, with Alexander Hamilton and John Jay, he wrote The Federalist Papers, a collection of essays that promoted the adoption of the Constitution.

He was appointed Secretary of State by Thomas Jefferson, and succeeded Jefferson as president in 1809.

Growing conflicts with the British led to the War of 1812, and when British troops advanced on Washington, the diminutive president led the militia while his wife, Dolley, collected valuable artifacts from the White House, including Gilbert Stuart's portrait of George Washington, before the British set fire to the president's home.

The first U.S. stamp to picture Madison is the $2 blue stamp (Scott 262) from the 1894 issue, the first series printed by the U.S. Bureau of Engraving and Printing. The portrait was engraved by G.F.C. Smillie.