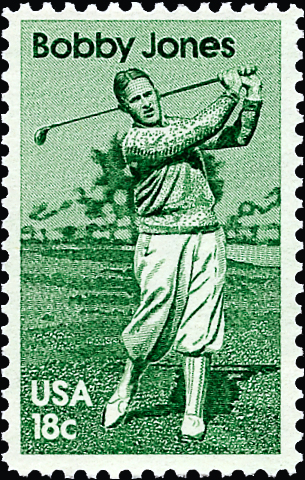 Jones demonstrated his golfing skill at an early age, competing in tournaments while still a teenager. He won the United States Open championship at the age of 21, and would go on to win it three more times.

Jones was never a professional golfer: he competed as an amateur until he retired from competitive golf at age 28, shortly after completing the grand slam. He was a lawyer by profession, though he had studied engineering before earning his law degree.

After his retirement from the game, Jones made a number of instructional films for golfers, and helped to design the Augusta National Golf Course in Georgia, which hosts the annual Masters tournament.

The design for the 18¢ Bobby Jones commemorative stamp was unveiled April 12, 1980, during the Masters tournament at Augusta. The unveiling coincided with the 50th anniversary of Jones' "magnificent accomplishment of winning the Grand Slam of Golf in 1930," according to the Postal Service.