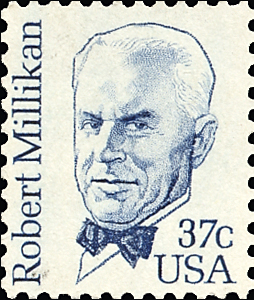 Robert Andrews Millikan, born (1868-03-22)March 22, 1868 in Morrison, Ill., received the Nobel Prize in physics for his work on the elementary charge of electricity, and his advances on the photoelectric effect initially theorized by Albert Einstein.

Millikan studied at Oberlin College in Ohio and earned his Ph.D. in physics from Columbia University. He spent a number of years teaching and conducting research at the University of Chicago, where he had also studied as a graduate student.

He was elected to the National Academy of Sciences in 1915, and served as president of the American Physical Society.

Millikan was appointed director of the Norman Bridge Laboratory at the California Institute of Technology in 1921.

He was awarded the Nobel Prize two years later, and presented a lecture on "The electron and the light-quant from the experimental point of view."

The 37¢ blue definitive stamp honoring Millikan (Scott 1866) was issued Jan. 26, 1982, at the California Institute of Technology in Pasadena, Calif.