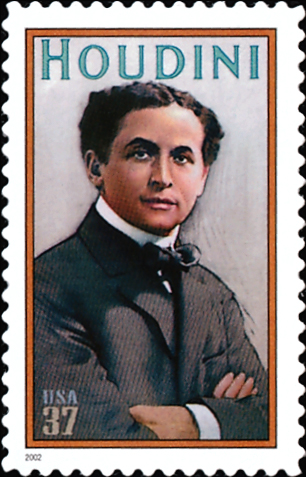 The name Harry Houdini has long been synonymous with magic and escape artistry, but Houdini was actually born Erich or Erik Weisz in Budapest, Hungary, on March 24, 1874. The Weisz family moved to Wisconsin when Houdini was just four years old, and he would move again to New York City while still in his teens.

His interest in magic and performing led him to develop an act with a childhood friend, and in 1893 they performed at the World Columbian Exposition in Chicago.

With his young wife as his assistant, Houdini found success on the vaudeville circuit in 1900, and he would expand his reputation while touring with his act in Europe.

Houdini was a supreme showman who became famous worldwide with amazing public exhibitions where he freed himself from shackles and handcuffs. His evolving act included escaping from a giant milk can filled with water; a later trick was known as the upside down water torture cell.

While entertaining audiences as an illusionist, Houdini also sought to debunk those who preyed on others with false claims of spiritual gifts.

Houdini was commemorated on a 37¢ stamp issued July 3, 2002, during the 100th anniversary of the Society of American Magicians in New York City. The stamp was printed with a hidden effect known as "scrambled indicia" that reveals an image of chains binding Houdini when the stamp design is viewed with a special acrylic decoder lens that was marketed by the United States Postal Service.