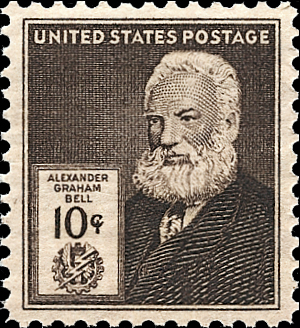 Born in Edinburgh, Scotland, on March 3, 1847, Alexander Graham Bell moved to Canada in 1870, and to Boston the following year, securing a teaching position there at a school for the deaf.

An intelligent and inquisitive young man, his interest in aiding those who could not hear led him to research in areas such as telegraphy, and efforts to develop an instrument that would transmit human speech.

His work with Thomas Watson resulted in the transmission of a voice message on March 10, 1876, as Watson heard Bell declare, "Mr. Watson, come here. I want you!" over a wire from another room.

Graham demonstrated his invention just a few months later at the Centennial Exhibition in Philadelphia, and within two years a telephone was installed in the White House for president Rutherford B. Hayes.

Bell would continue his research in other areas, including improvements on the phonograph and advances in manned aircraft flight.

He became a naturalized citizen of the United States in 1882, though he spent much of his later life with his family in Nova Scotia, at a large house and laboratory he built there.

Alexander Graham Bell was celebrated on a 10¢ stamp in the 1940 Famous Americans series (Scott 893). His name later appeared on a 13¢ commemorative issued in 1976 to mark the centenary of his first call to Mr. Watson, and his telephone patent application (1683).