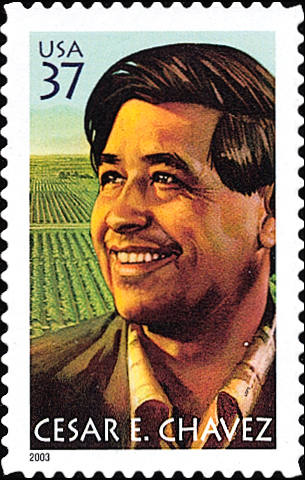 American civil rights activist and labor leader Cesar E. Chavez was born March 31, 1927, near Yuma, Ariz. After losing their home during the Great Depression, the Chavez family became migrant farm workers in the fields of California.

Chavez joined the U.S. Navy at age 19, and married Helen Fabela in 1948. With the Community Service Organization in the 1950s, he began organizing farm laborers to help improve their working and living conditions. He later founded United Farm Workers with Dolores Huerta to focus on the plight of the field workers.

Inspired by his admiration for Mohandas Gandhi and Martin Luther King Jr., Chavez used nonviolent methods, including peaceful boycotts and his own public fasts, to achieve his goals of fair treatment for agricultural workers.

Cesar Chavez died in 1993. The next year he was awarded the Presidential Medal of Freedom, the nation's highest civilian honor; it was presented to his widow, Helen Chavez, on Aug. 8, 1994, by President Bill Clinton.

The United States Postal Service issued a 37¢ commemorative stamp honoring Cesar Chavez on April 23, 2003 (Scott 3781). The stamp design shows a portrait of Chavez with grape fields in the background. The image, painted by Robert Rodriguez, is based on a 1976 photograph by Bob Fitch.