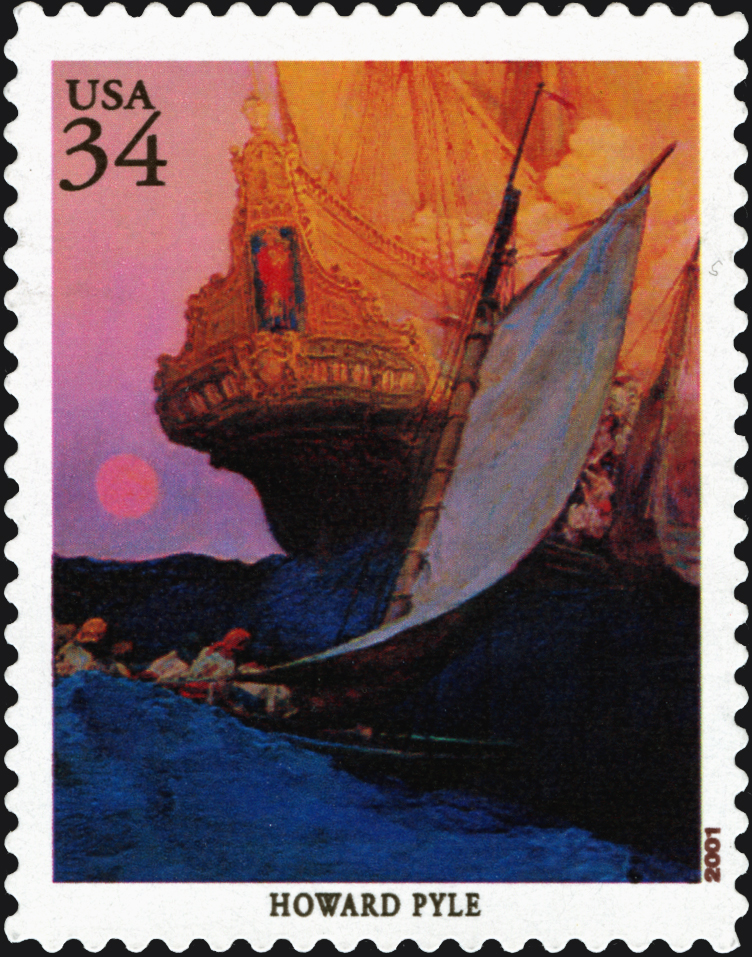 Howard Pyle, born March 5, 1853, often illustrated his own writings. He is commemorated on a 34¢ stamp in the 2001 American Illustrators set.

Text on the back of the stamp pane reads, in part, "Howard Pyle (1853-1911) earned his reputation as the 'father of American illustration' by training a generation of influential artists at his highly selective school. Often illustrating his own stories, Pyle inspired readers with vivid depctions of history and legend."

The stamp shows Pyle's painting An Attack on a Galleon, from his 1905 story "The Fate of a Treasure-Town," published in Harper's Monthly Magazine.

Pyle studied art with F.A. van der Wielen in Philadelphia, Pa., and at the Art Students League in New York City. He started with line illustrations that have been compared in their style to the work of Albrecht Durer, but his later work consisted mostly of full color paintings.

His illustrations often accompanied his stories and books, including The Merry Adventures of Robin Hood in 1883, Otto of the Silver Hand in 1888, and a four-volume series about the adventures of King Arthur published between 1903 and 1910.

"An avid writer as well as an artist, Pyle was a family man and a beloved teacher, responsible for initiating what came to be known as the Brandywine School of Art," wrote Danielle Rice, executive director of the Delaware Art Museum, in an article for Town Square Delaware.

Among those taught by Pyle were N.C. Wyeth, Jessie Wilcox Smith and Maxfield Parrish, who are each represented by their own stamps in the American Illustrators set.