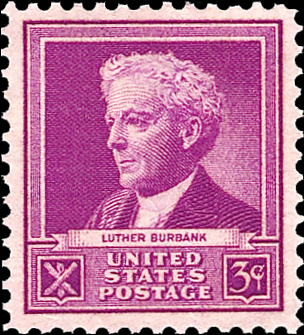 The 3¢ bright red violet stamp honoring Luther Burbank (who was born March 7, 1849) was issued April 17, 1940, as part of the extensive Famous Americans commemorative series (Scott 876). His stamp is from of the American Scientists subset of the series, where he keeps company with John James Audubon, Crawford W. Long, Walter Reed and Jane Addams.

The Burbank stamp debuted in Santa Rosa, Calif., where the botanist and horticulturist spent the last 50 years of his life. A small design in the lower left corner of the stamp symbolically represents Burbank's many successful experiments with plants.

Burbank's earliest experiments took place in Massachusetts, his home state, where he developed the Burbank potato variety, which led to the common russet Burbank potato. His intention was to cultivate a disease-resistant potato in response to the extensive potato blight that devastated Ireland in the 1840s.

He received $150 for the rights to the new potato and used the money to travel to Santa Rosa, establishing his greenhouse and gardens there.

Through careful study and observation, Burbank was able to successfully combine the best qualities of plants to develop more than 800 new varieties including fruit trees, vegetables, grains and forage plants. He published an annual catalog titled New Creations in Fruits and Flowers, and authored several books that inspired public interest in plant breeding, and in the man who led the field. He found increasing fame and new friendships with famous innovators such as Thomas Edison and Henry Ford.