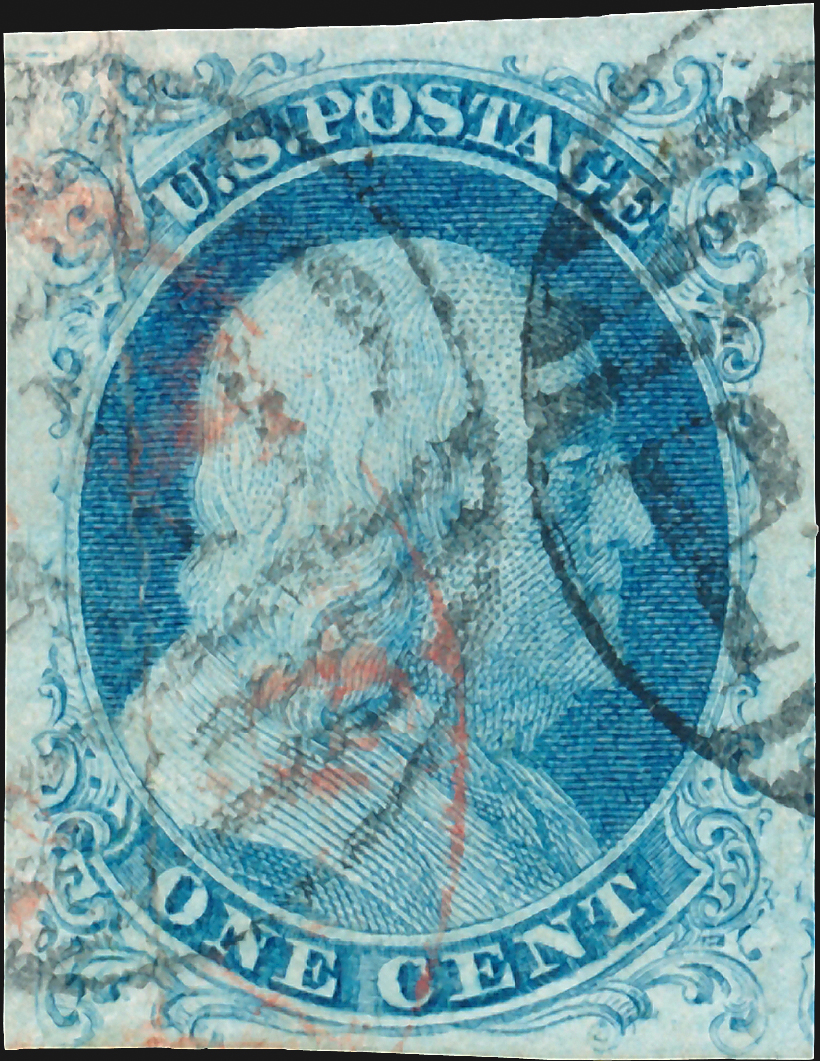 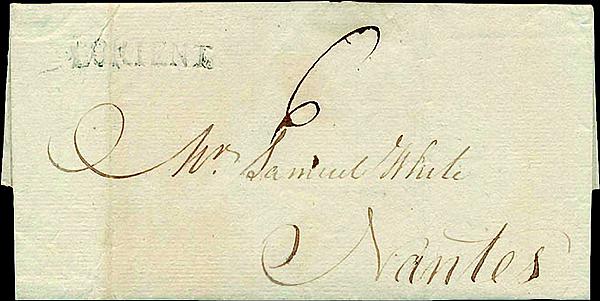 This 1782 folded letter from Capt. John Barry was mailed during his command of the frigate Alliance. It was part of the Richard Graham collection of United States naval covers auctioned during the Schuyler Rumsey winter sale in December.

Schuyler J. Rumsey Philatelic Auctions held its winter sale in San Francisco on Dec. 8-13, 2014. The sale was originally slated to conclude Dec. 11, but a weather-related power outage forced a two-day postponement of the final session.

The Robert J. Karrer collection of Charleston postal history was also offered separately Dec. 12. Both sales were previewed in the Dec. 8, 2014, issue of Linn’s.

Among the stamps and postal history offered in the sale was the Richard Graham collection of naval covers.

One of the earliest naval covers in existence, a 1782 folded letter signed by Capt. John Barry, the first captain commanding a United States warship, and sent to his friend Samuel White in Nantes, France, was featured on page 1 of Linn’s Dec. 8 issue.

In his letter, Barry describes looking forward to going on a vacation cruise for a while, “as I have no hay to make.”

The cover doubled its presale estimate to sell for $7,763, including the 15 percent buyer’s premium Rumsey adds to all lots.

Barry later defeated a British warship in the final engagement of the Revolutionary War and went on to be remembered as “Father of the U.S. Navy,” a moniker he shared with John Paul Jones.

Among U.S. stamps in the auction, a used 1851 imperforate 1¢ Franklin known as type I (Scott 5), showing the full engraved scrollwork at the top and bottom of the design, sold for $40,250.

The only imperforate 1851 1¢ stamps showing the full design are those from position 7 in the right-hand pane of the early state of the first 200-stamp printing plate, a position specialists call “7R1E” for short. On all other positions and plates, the scrollwork is partially or completely erased.

Therefore, just one example in 1,000 of the 1851 imperforate 1¢ issue can qualify as type I. Fewer than 100 such examples are known, most of them postally used.

As late as 1965, the example in the Rumsey sale, which shows “Paid” grid cancels and a partial Boston circular datestamp in red, existed as the middle stamp of a strip of three on cover. Unfortunately, at some point someone decided the stamp would be easier to sell on its own, and an important item of postal history was destroyed.

A full discussion and census of position 7R1E stamps by the late Jerome S. Wagshal, a noted expert in U.S. classic issues, can be found online.

One of the highlights of the Karrer collection was a cover sent to England in the 1850s bearing a Charleston, S.C., carrier’s stamp.

In the days before blue mailboxes were ubiquitous on American city streets, postal customers had to either drop their mail at the post office themselves or pay a carrier to take it there for them.

John H. Honour was a letter carrier in Charleston, and like many other carriers in America prior to 1863, he was allowed to issue his own stamps to pay for letters he picked up and delivered to the post office. This formed a substantial part of his income.

A series of small, typeset stamps were used by Honour and his colleagues throughout the 1850s. Most are found on local mail.

The cover in the Rumsey auction was described as a “remarkable Transatlantic use” of Honour’s 2¢ black-on-bluish-paper carrier’s stamp (Scott 4LB8).

The stamp is tied by a manuscript “X” and a large “48,” indicating the total postage paid. A handstamped “6” shows the double-rate amount credited to the packet line that carried the letter from New York to Liverpool, where it arrived just over two weeks after being sent. From its original destination in Dorking, the letter was then forwarded to London. The cover sold for $18,400, more than four times its presale estimate.