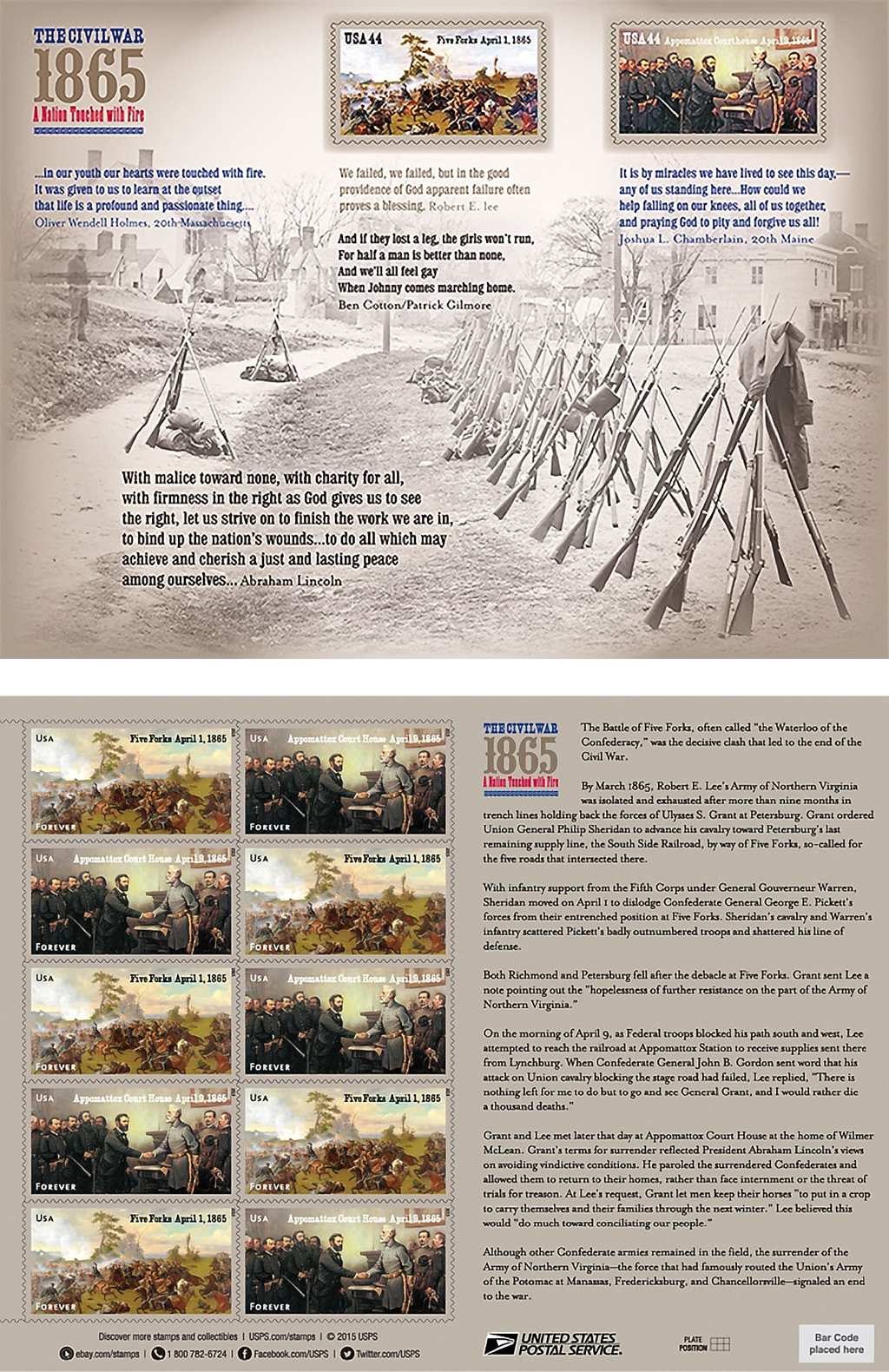 The Civil War 1865 issue comes in a pane of 12 stamps with information about the final year of the war and historic quotes about the conflict.

Forever stamps commemorating the 1865 Battle of Five Forks and the surrender at Appomattox will conclude the five-year Civil War series from the United States Postal Service.

The final stamp set in the United States Postal Service’s five-year commemoration of the U.S. Civil War will be issued April 9 in Appomattox, Va.

The two forever stamps in the set show scenes from the last days of the war.

One stamp depicts the April 1, 1865, Battle of Five Forks, near Petersburg, Va., as rendered in a circa 1885 painting by French artist Paul Dominique Philippoteaux.

The stamps will be issued with a first-day ceremony at the Appomattox Court House, 113 National Park Drive, in Appomattox.

The National Park Service has the ceremony scheduled at 1 p.m., but the Postal Service told Linn’s the ceremony is planned for 1:30 p.m.

The new stamps will be issued in a pane of 12 that matches the format of the previous four issues in this series.

Two stamps (one of each design) are found on one side of the pane, which also includes four quotes from Oliver Wendell Holmes, Abraham Lincoln, Robert E. Lee, and Joshua L. Chamberlain, plus four lines from a parody by Ben Cotton and Patrick Gilmore of the song When Johnny Comes Marching Home.

This side of the pane also shows a background photograph of a number of Federal rifles stacked in the vicinity of Petersburg during the siege, according to the Postal Service.

Ten stamps are positioned on the opposite side of the pane, along with text describing the last year of the war:

The Battle of Five Forks, often called “the Waterloo of the Confederacy,” was the decisive clash that led to the end of the Civil War.

By March 1865, Robert E. Lee’s Army of Northern Virginia was isolated and exhausted after more than nine months in trench lines holding back the forces of Ulysses S. Grant at Petersburg. Grant ordered Union General Philip Sheridan to advance his cavalry toward Petersburg’s last remaining supply line, the South Side Railroad, by way of Five Forks, so-called for the five roads that intersected there.

Both Richmond and Petersburg fell after the debacle at Five Forks. Grant sent Lee a note pointing out the “hopelessness of further resistance on the part of the Army of Northern Virginia.”

On the morning of April 9, as Federal troops blocked his path south and west, Lee attempted to reach the railroad at Appomattox Station to receive supplies sent there from Lynchburg. When Confederate General John B. Gordon sent word that his attack on Union cavalry blocking the stage road had failed, Lee replied, “There is nothing left for me to do but to go and see General Grant, and I would rather die a thousand deaths.”

Grant and Lee met later that day at Appomattox Court House at the home of Wilmer McLean. Grant’s terms for surrender reflected President Abraham Lincoln’s views on avoiding vindictive conditions. He paroled the surrendered Confederates and allowed them to return to their homes, rather than face internment or the threat of trials for treason. At Lee’s request, Grant let the men keep their horses “to put in a crop to carry themselves and their families through the next winter.” Lee believed this would “do much toward conciliating our people.”

Although other Confederate armies remained in the field, the surrender of the Army of Northern Virginia — the force that had famously rousted the Union’s Army of the Potomac at Manassas, Fredericksburg, and Chancellorsville — signaled an end to the war.

The first two-stamp set in the current Civil War series was issued April 12, 2011, commemorating the attack on Fort Sumter and the first battle of Bull Run (Scott 4522-4523).

Press sheets for the Civil War 1865 set, both with and without the die cuts that separate individual stamps, were printed in a quantity of 500 with die cuts and 1,000 without. The sheets consist of six panes of 12 stamps and sell for $35.28 each.

The U.S. Postal Service will offer a pictorial first-day cancel and a digital color postmark for the Civil War 1864 stamps.

Standard ordering instructions apply. Collectors requesting first-day cancels are encouraged to purchase their own stamps and affix them to envelopes. The first-day cover envelopes should be addressed for return (a removable label may be used), and mailed in a larger envelope addressed to The Civil War: 1865, Postmaster, 791 Court St., Appomattox, VA 24522-9998. Requests for first-day cancels must be postmarked by June 8.