From the Jenny Invert to the Civil War: USPS jumps on limited-edition bandwagon 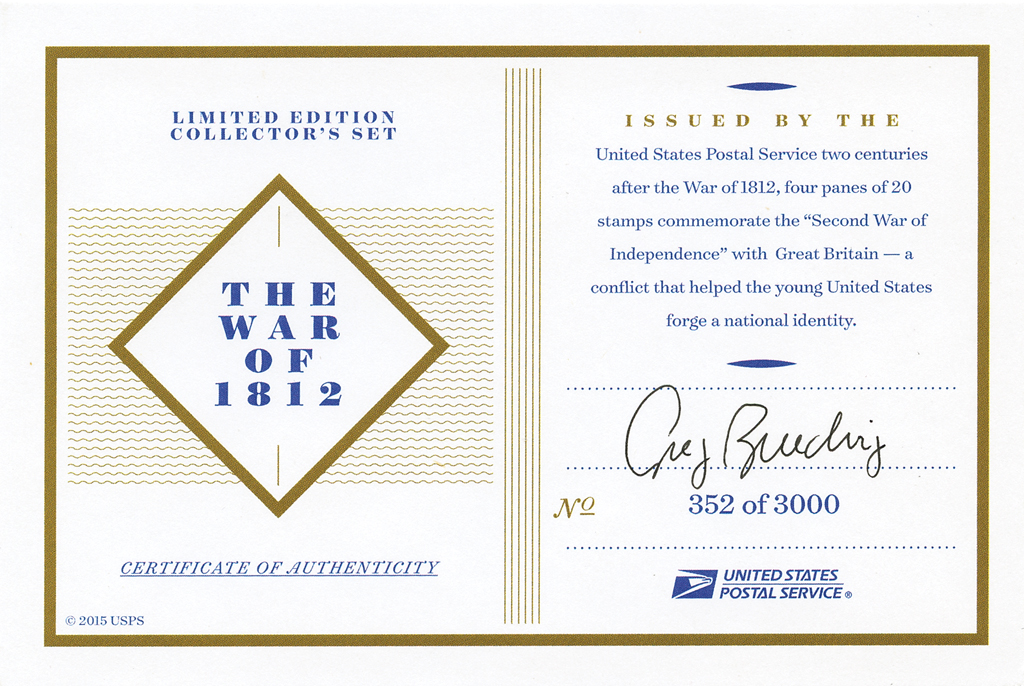 A certificate of authenticity from the United States Postal Service’s War of 1812 limited-edition set, signed by USPS art director Greg Breeding, showing the set to be No. 352 of 3,000 produced.

“Not every collector likes press sheets, but enough do to make it worthwhile.

“Why not try an occasional limited edition progressive color proof set (showing how the final design is achieved by a succession of colors) available by lottery. Let collectors vote with their wallets.”

Press sheets have obtained a following, and the Postal Service began building on the limited-edition concept in fall 2013, when it offered a collection of progressive proof panes and what it called “die wipes” of the $2 Jenny Invert pane of six.

Also included in the Jenny Invert collection was a mint pane, a pane with a first-day postmark, and a booklet about the 1918 24¢ airmail error that inspired the 2013 $2 counterpart. All these goodies came housed in a sturdy red box.

Although the USPS intended to produce 5,000 sets, just 1,900 were sold. This number is indicated on the limitation card included with each set.

In mid-February, a second limited-edition product came available: the War of 1812 Collector’s Set.

Postal Service spokesman Mark Saunders told me that 3,000 War of 1812 sets were produced. If you order one from Stamp Fulfillment Services, the cost is $59.95 plus $1.85 shipping.

First and foremost, one pane of 20 of each of the four issues: USS Constitution, Battle of Lake Erie, Fort McHenry and Battle of New Orleans.

Also included is a plain white card with singles of each issue affixed and tied with a Feb. 1, 2015, War of 1812 Station digital color postmark.

And to add stature to the limited nature of the set, look no further than the certificate of authenticity signed by USPS art director Greg Breeding.

Shown here is the certificate that came with the set I ordered, indicating “No 352 of 3000.”

A handsome folio-size booklet provides a capsule history of the war and spaces to mount the four panes. And, yes, mounts are included.

There’s no doubt that many collectors have, indeed, voted with their wallets — by not buying these products.

Nonetheless, the USPS seems to be selling enough of them to warrant making more.

During a Feb. 20 teleconference with Cindy Tackett, acting director of stamp services, and other postal officials, it was announced that the Postal Service will issue a limited-edition set for the Civil War series that began in 2011 and concludes this year.

Tackett said the Civil War set will be available in time for the holiday season at the end of the year.

You can vote with your wallet on that one, too.