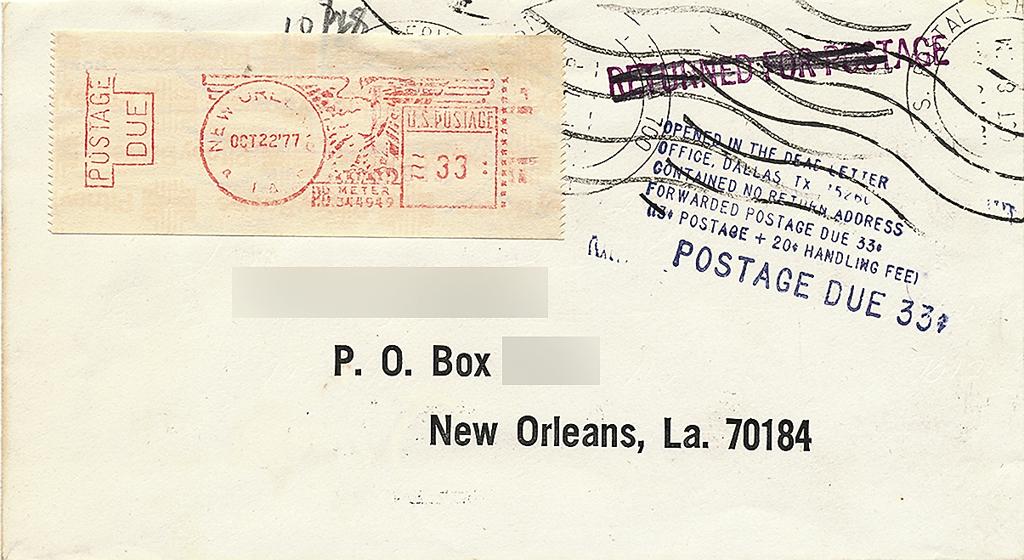 Reflecting the then-current first-class rate and the increased handling fee for forwarded unpaid mail, this 1977 letter cost the addressee 33¢ upon receipt. 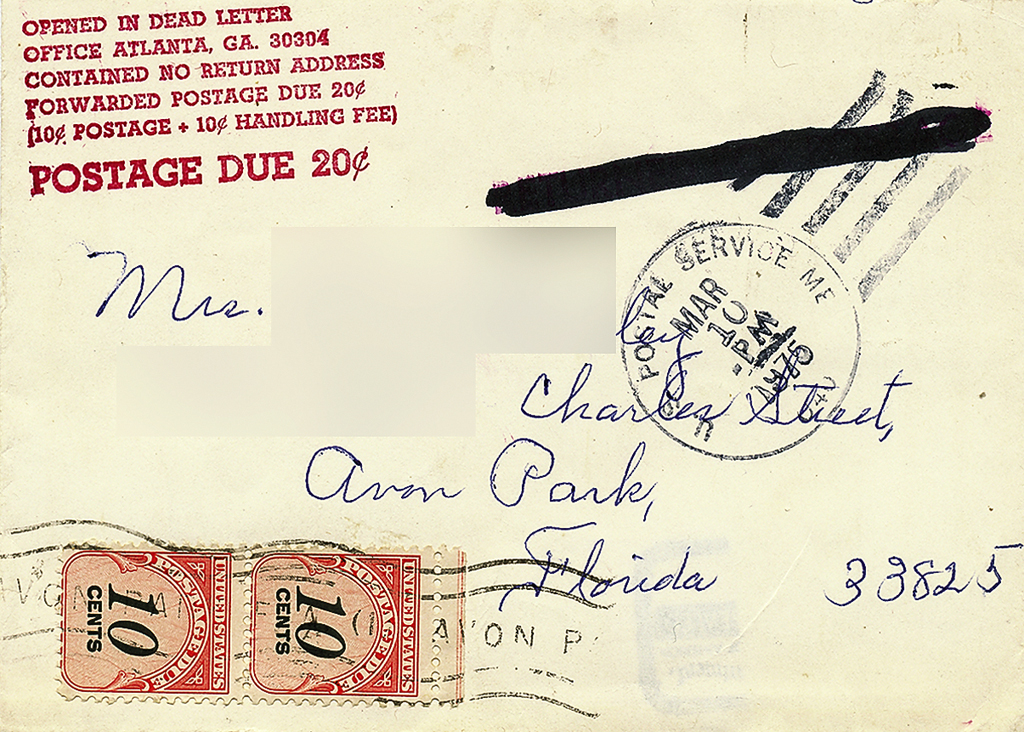 This 1975 unpaid letter with no return address went through the Atlanta dead letter office and then on to the addressee, who was charged for postage and the handling fee.

Many collectors probably are aware that the United States Postal Service’s dead letter offices (or branches, as they are sometimes called) use penalty envelopes nowadays to return letters that were mailed without the sender’s card (return address) on the envelope, and which therefore are unmailable or undeliverable.

There was a very interesting change in this unpaid, unreturnable letter process in 1976.

The new process is illustrated by the two letters shown here. Both of these letters were unpaid. Therefore, according to the Postal Service Manual, Transmittal Letter 32, Sec. 146.121, Nov. 17, 1974: “Mail of any class, including that for which special services are indicated, received at either the office of mailing or the office of address without postage, will be endorsed Returned for Postage and returned to the sender without an attempt at delivery. If no return address is shown, the piece will be disposed of in accordance with 159.4.” (Sec. 159.4 says first-class matter was to be sent to the dead letter office.)

Incidentally, the obliterated handstamp on the letter read “RETURNED FOR POSTAGE,” and was marked out because the letter could not be returned as it had no return address.

The canceled postage due stamps (Scott J97) on this letter indicate that the 20¢ due was collected by the post office from the addressee.

Here, an important point must be made. This letter is dated March 10, 1975, more than a year before the April 12, 1976, Postal Bulletin announcement mentioned above. However, its handling was clearly a permitted procedure as early as Jan. 17, 1975, because the following is found in the Postal Service Manual, Post Office Services (Domestic) Transmittal Letter 33, Sec. 159.73b, dated Jan. 17, 1975: “A fee of 10¢ is charged for delivery to sender or addressee of each letter or first-class parcel opened in the dead mail office.”

A second, similar letter is shown here to make an additional point. This October 1977 letter also was unpaid, and as there was no return address, it was not possible to be “RETURNED FOR POSTAGE.” This letter was sent to the Dallas dead letter office, where it was opened but no return address could be determined. The piece could now lawfully be sent to the addressee as “POSTAGE DUE 33¢.”

The letter was sent on and the 33¢ was collected, as indicated by the affixed postage due meter stamp.

Note that the stamped marking on the 1977 letter calls it the “Dead Letter Office, Dallas.” Since 1917, when there was only one officially named “Dead Letter Office” (in Washington, D.C.), there have been a varied number of dead letter branches, from three in late 1917; to many from 1935 to 1945; down to only 14 as of 1975; and only one at present, in Atlanta, now called the Mail Recovery Center.

Tony Wawrukiewicz and Henry Beecher are the co-authors of two useful books on U.S. domestic and international postage rates since 1872. The third edition of the domestic book is available from the American Philatelic Society, while the international book may be ordered from Wawrukiewicz' website.