New Stamps of the World: Stamps illuminate the International Year of Light 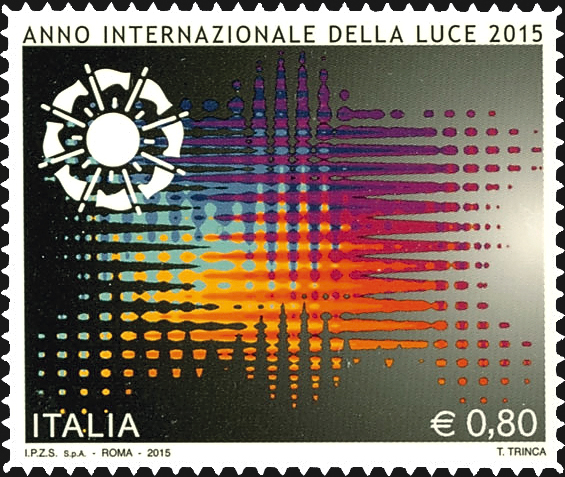 Italy’s International Year of Light stamp has a symbolic design. 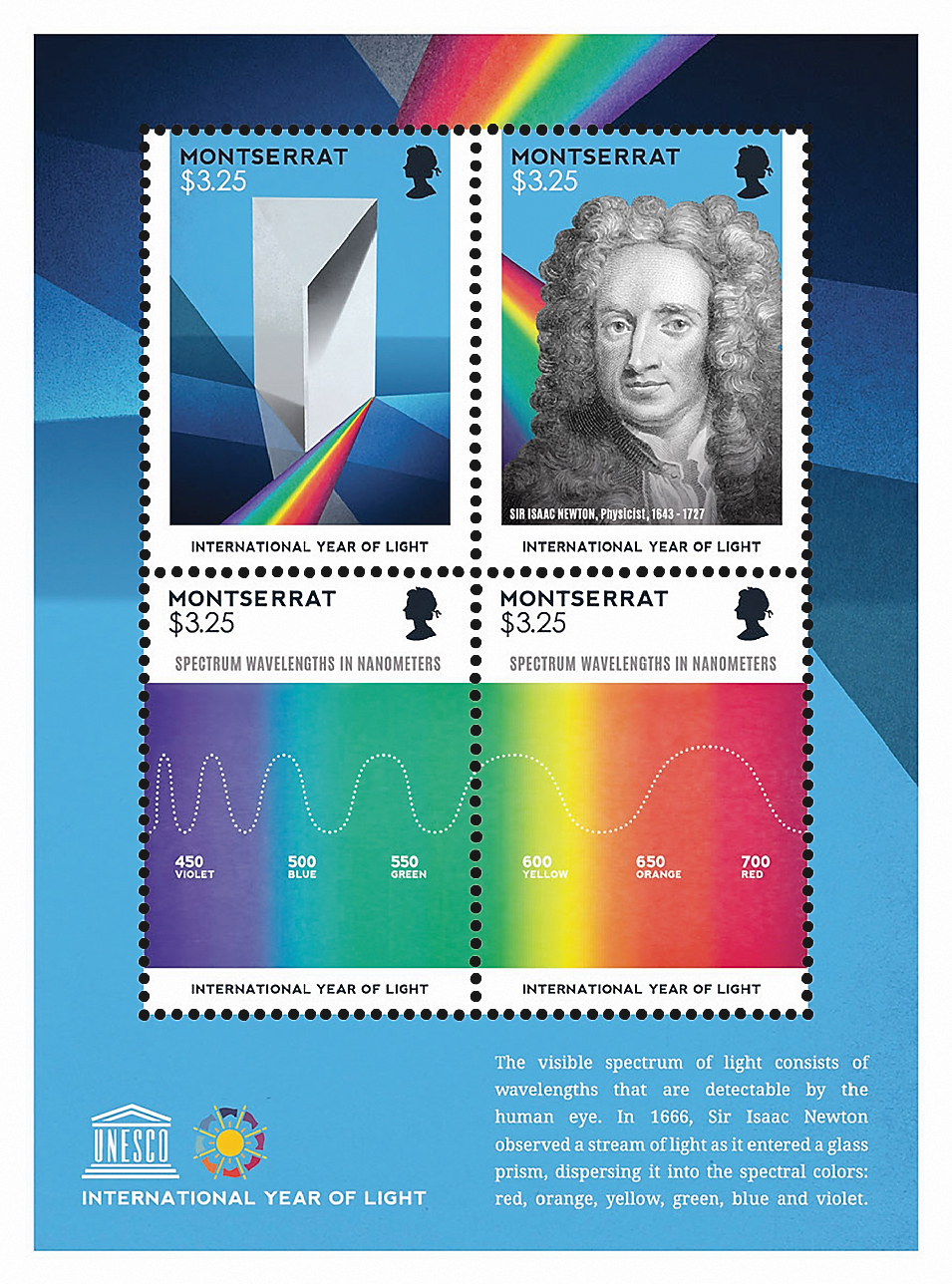 A pane of four stamps from Montserrat commemorates Isaac Newton’s experiments involing the spectrum of light. 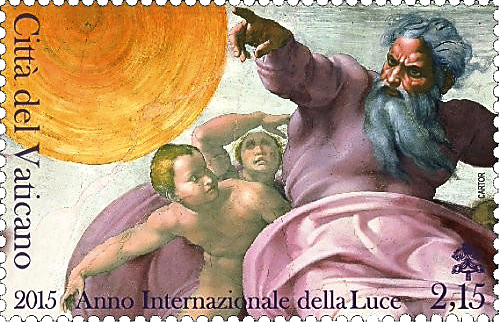 A detail from the ceiling of the Sistine Chapel painted by Mich­aelanglo is featured on the stamp from Vatican City. 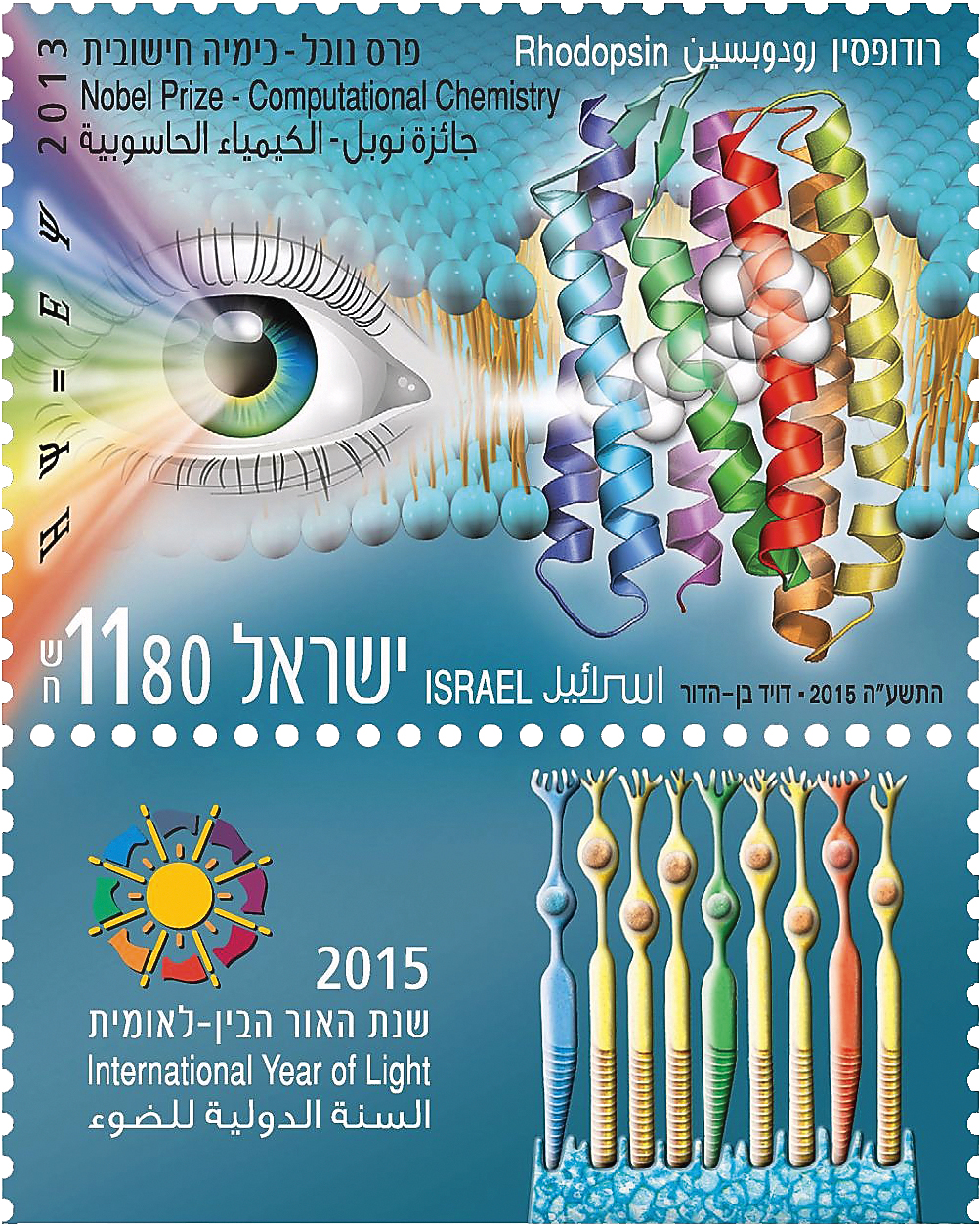 A stamp from Israel honors the International Year of Light and Martin Karplus, Michael Levitt and Arieh Warshel who shared the 2013 Nobel Prize in chemistry. 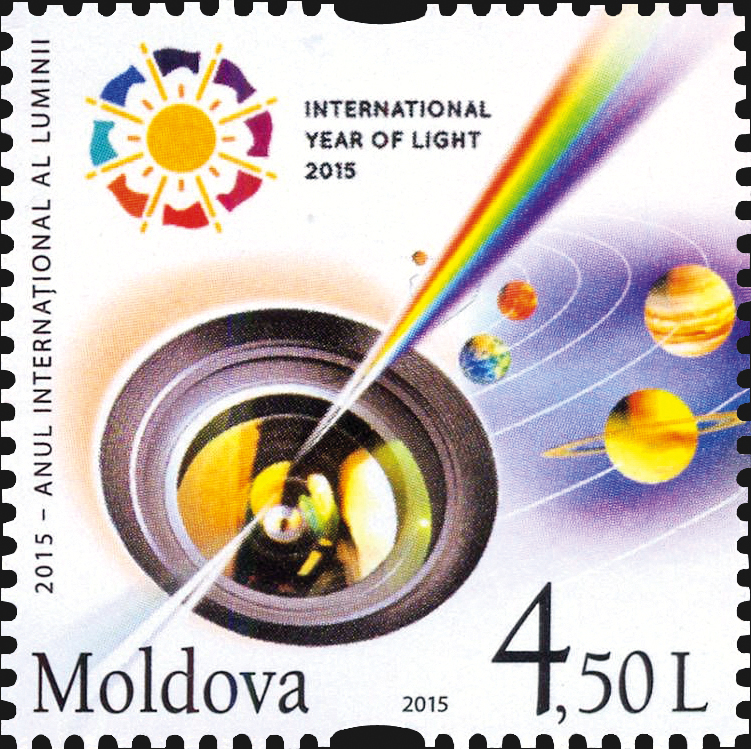 Planets are included in the design of Moldova’s International Year of Light commemorative. 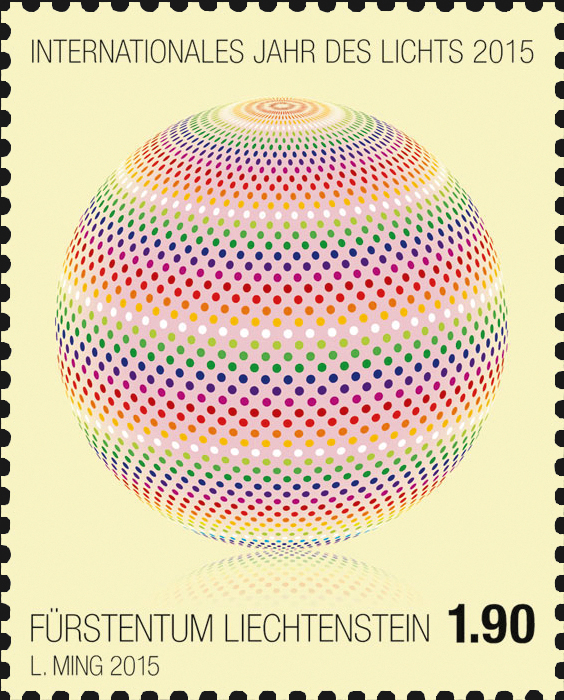 The United Nations General Assembly has proclaimed 2015 as the International Year of Light and Light-based Technologies. At least a half dozen postal administrations have issued stamps honoring the year, and more are planning to do so.

The most recent International Year of Light stamp was released March 1 by Liechtenstein.

A fluorescent yellow ink ties in with the optics theory.

Liechtenstein’s philatelic office said, “The background of the stamp glows in the dark owing to its flourescent colour. It turns into a source of light if it was exposed to sunlight beforehand.”

The wave theory can be  demonstrated by holding the stamp up to light, according to the philatelic office, because microperforations in the stamp paper are “easily visible as the light waves are diffracted through the small openings.”

An ultraviolet light is needed to see the third special effect, or “experiment” as the philatelic office calls it.

The press release explained, “For the experiment on quantum theory, the light pink colour behind the ball [shown in the stamp’s design] was printed with a special colour. When irradiated with UV light, the colour turns from pink to violet.”

Leone Ming designed this stamp. Joh. Enschede of the Netherlands printed it by four-color offset, plus screen printing of the aforementioned special inks, in panes of 16.

Moldova, Israel, Vatican City and the Bosnia Serb Administration) celebrated the International Year of Light on stamps issued in February.

The 4.50-leu Moldova stamp was released Feb. 21 along with a 1.75-leu denomination honoring another U.N. international year, the International Year of Soils and Plant Roots.

An article posted on an information and educational website for business, tourism, history and events in Moldova describes the design of the International Year of Light stamp as picturing a lens that reflects the colors of the spectrum.

This stamp also shows planets in orbit and the emblem of the year.

Both stamps were designed by Vitaliu Pogolsa and printed by Nova Imprim in separate panes of eight.

The 11.80-shekel stamp issued Feb. 20 by Israel commemorates the International Year of Light and the 2013 Nobel Prize in chemistry. The prize was jointly awarded to Martin Karplus, Michael Levitt and Arieh Warshel “for the development of multiscale models for complex chemical systems.”

According to information from the Israel Philatelic Service, the stamp design represents the Schrodinger equation on the left and the protein rhodopsin on the right.

The equation developed by Edwin Schrodinger in 1925 is the most fundamental tool of quantum mechanics.

Discovered by Franz Christian Boll in the 1870s, rhodopsin is located in the rod cells of the retina and converts light into electrical signals.

The emblem of the International Year of Light is shown in the tab, or label, attached to the stamp. Also pictured in the tab is representation of rods and cones, two types of light-sensitive cells in the human retina.

Cartor, a security printer in France, printed the stamp by offset in sheets of 15 stamps and five tabs.

Also printed by Cartor, the Vatican City’s International Year of Light stamp was issued Feb. 19 in panes of 10.

The design features a detail of Creation of the Sun, Moon and  Planets, part of Michelangelo’s fresco on the ceiling of the Sistine Chapel.

The 1.70-marka stamp from the Bosnian Serb Administration features a symbolic design, representing the refraction of light.

This stamp was issued Feb. 16 in sheets of eight stamps and a label.

The design on Italy’s €0.80 stamp issued Jan. 26 represents an abstract image of light. The stamp was printed in sheets of 28.

Montserrat issued a souvenir sheet of one stamp and a pane of four Jan. 29. Ultraviolet and infrared light are represented on the $7 stamp in the souvenir sheet. The four $3.25 stamps in the pane feature Isaac Newton and the visible spectrum of light.

According to an inscription in the selvage,  “ … In 1666, Sir Isaac Newton observed a stream of light as it entered a glass prism, dispersing in the spectral colors: red, orange, yellow, green, blue and violet.