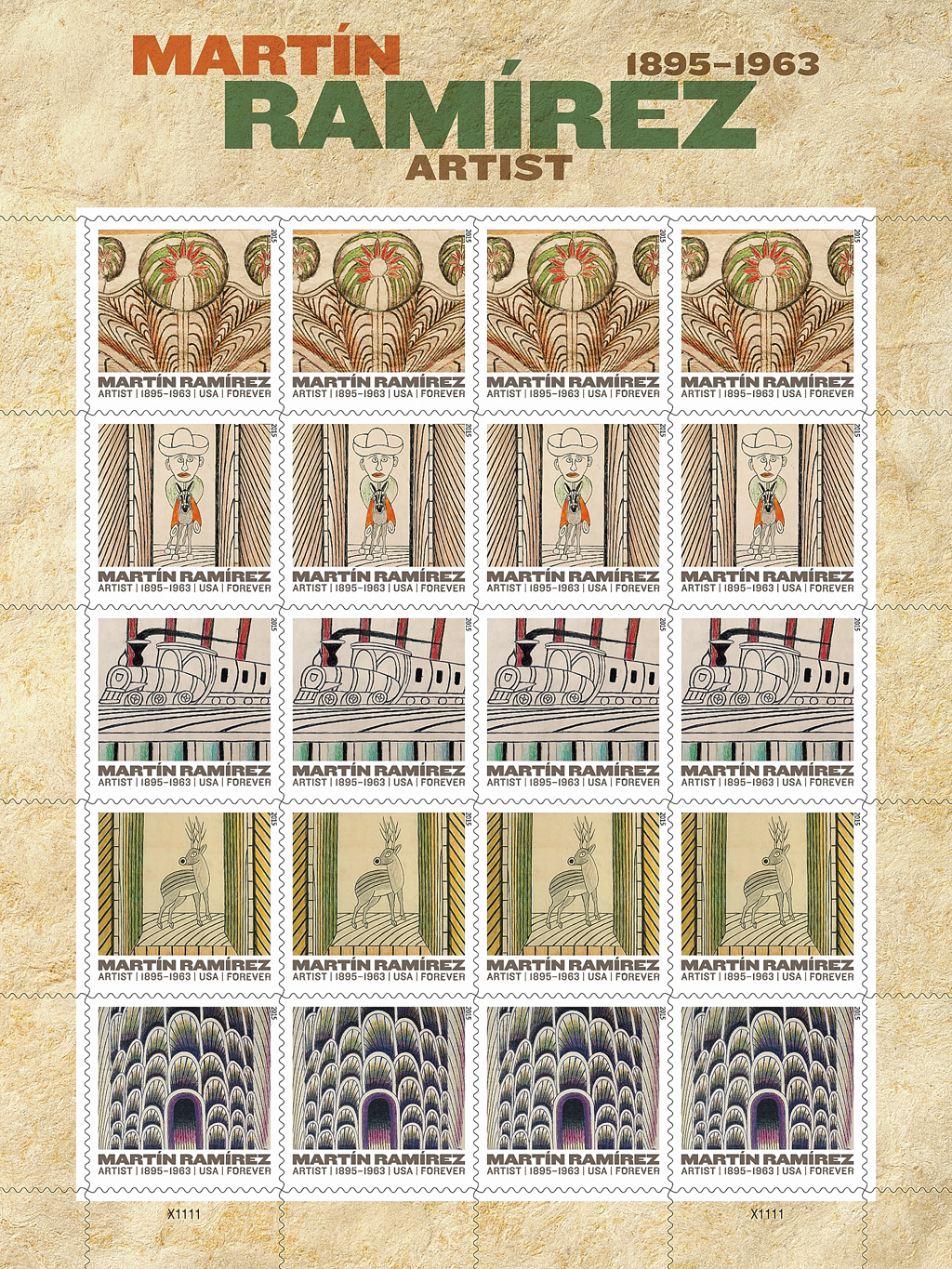 The Martin Ramirez stamps will be issued in a pane of 20 with a decorative header.

The ceremony coincides with the opening of the gallery’s exhibit “Martin Ramirez Forever,” which runs through May 2.

The stamps show five different designs from the more than 450 drawings and collages by Ramirez that have been preserved. Many other works are assumed to have been discarded and destroyed.

The offset-printed stamps were designed by USPS art direct Antonio Alcala, and will be issued in panes of 20.

Ramirez was born in 1895 and migrated from Los Altos de Jalisco (near Guadalajara) to the United States in 1925, looking for work that would help him support his wife and children left behind in Mexico.

Opportunities for fruitful employment vanished, however, with the arrival of the Great Depression, leaving Ramirez homeless on the streets of Los Angeles, unable to speak English.

He was eventually diagnosed as schizophrenic and spent the rest of his life — more than 30 years — in psychiatric hospitals.

Ramirez was transferred to a tuberculosis ward at DeWitt State Hospital in Auburn, Calif., in 1948, but questions remain about the validity of the mental illness diagnosis.

After several attempts to escape, Ramirez, who rarely spoke, began concentrating on creating artwork, fashioning his own paper from discarded mail, flattened paper cups, brown bags, examining table paper and other scraps, glued together with paste similarly concocted with food, saliva and other available material.

Ink, graphite and wax crayon were applied with crude instruments such as wooden matches. His work was eventually noticed by a visiting psychology professor who supplied Ramirez with materials and arranged for his illustrations to be exhibited.

The artwork ranges in size from a few inches to several feet.

Ramirez died in 1963, and a few additional pieces of his art have been discovered over the years.

The Postal Service provided the following insight into the subjects shown on the five stamps:

“The first row of stamps highlights a floral detail from Untitled (Horse and Rider with Trees), created with crayon and pencil on paper … pieced together in 1954.

“The second row of stamps showcases the central image of Untitled (Man Riding Donkey), a gouache, colored pencil, and graphite drawing on paper from circa 1960-1963.

“The third row of stamps shows a detail from Untitled (Trains on Inclined Tracks), a gouache, colored pencil, and graphite drawing on pieced paper from circa 1960-1963.

“The fourth row of stamps showcases the central image of Untitled (Deer). The gouache, colored pencil, and graphite drawing on paper dates from circa 1960-1963.

“The fifth row of stamps features a detail from Untitled (Tunnel with Cars and Buses). The drawing was made with pencil, colored pencil, watercolor, and crayon on paper in 1954.”

Standard ordering instructions apply. Collectors requesting first-day cancels are encouraged to purchase their own stamps and affix them to envelopes. The first-day cover envelopes should be addressed for return (a removable label may be used), and mailed in a larger envelope addressed to Martin Ramirez Stamps, Special Events Coordinator, 380 W. 33rd St., New York, NY 10199-9998.

Requests for first-day cancels must be postmarked by May 25.